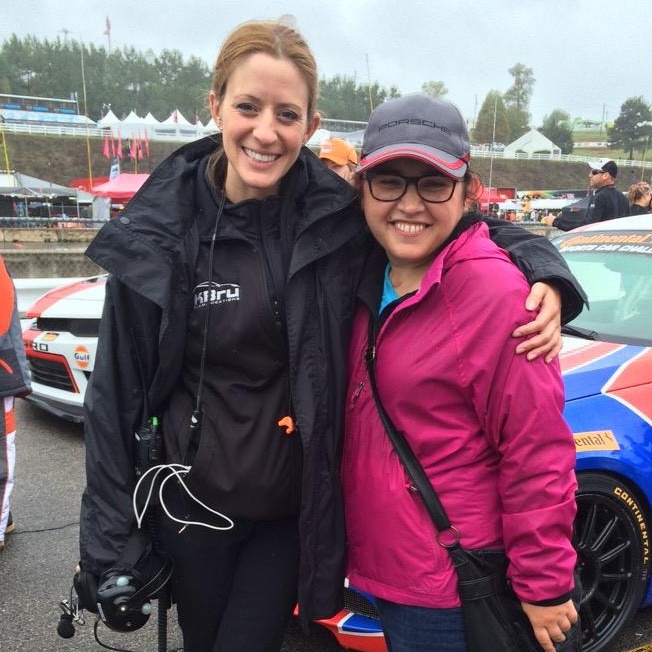 One of the best things about motorsports is the people. We’re a traveling circus, and after so many years and so many months away from home, we become family. That’s not limited to participants, but it includes the fans. There are so many times of race fans. There are the fair weather fans, who only tune in when everything is going exactly their way, and they make sure to inform you every time something isn’t to their liking. There are the casual fans who tune in when they can. They come to events to drink and occasionally watch the cars go round. They may wander into the paddock and check out the cars. Then you have the die-hards. The fans who live and breathe racing. Some of them are downright crazy (Like the time a fan gave a driver clippings of his dead cat’s hair to wear in his driver suit for good luck–no really). Others are exactly what keep this sport going. They turn out in all kinds of weather, they attend Q&As, tours and autograph sessions, they don’t ask teams for freebies, but instead are proud to stand in line at the merchandise tent. They’re excited to be annual ticket holders, they own every kind of social media, just to keep up with what’s going on. While the rest of us are enjoying a weekend away from the track, they’re watching a race halfway around the world, eager to provide other fans with updates. Their enthusiasm is infectious, and their unwavering support makes us participants want to do right by them.

Katie is one of these fans. Although she’s been attending races since 2010, I only officially met her a couple years ago. Her story is a fascinating one, and if you follow her on social media, she’s happy to share it. She can’t come to all of the races, but when she does, she’s there with a smile, cheering on anyone who has been fortunate enough to make it to her elite list of favorites. To say the fan turnout at Petit Le Mans last weekend surprised all of us would be an understatement. Granted, it’s one of the biggest events of the year at one of the most fan-friendly tracks in North America, but the forecast for the entire week predicted low temperatures with rain all day, every day that we were on track. Surely, no one would want to trudge around in the muddy, Georgia clay all weekend, just to see some cars go around a race track.

Boy, were we wrong, and happily to be proven so. Katie was one of the fans who braved the weather and even scarified a pair of shoes just to see the action and support her racing family. But instead of me telling you all about her adventures, here’s Katie’s recap in her own words.

Every single time someone asks me to describe the Petit Le Mans weekend, that’s how I start off the conversation. It was wet. I wa 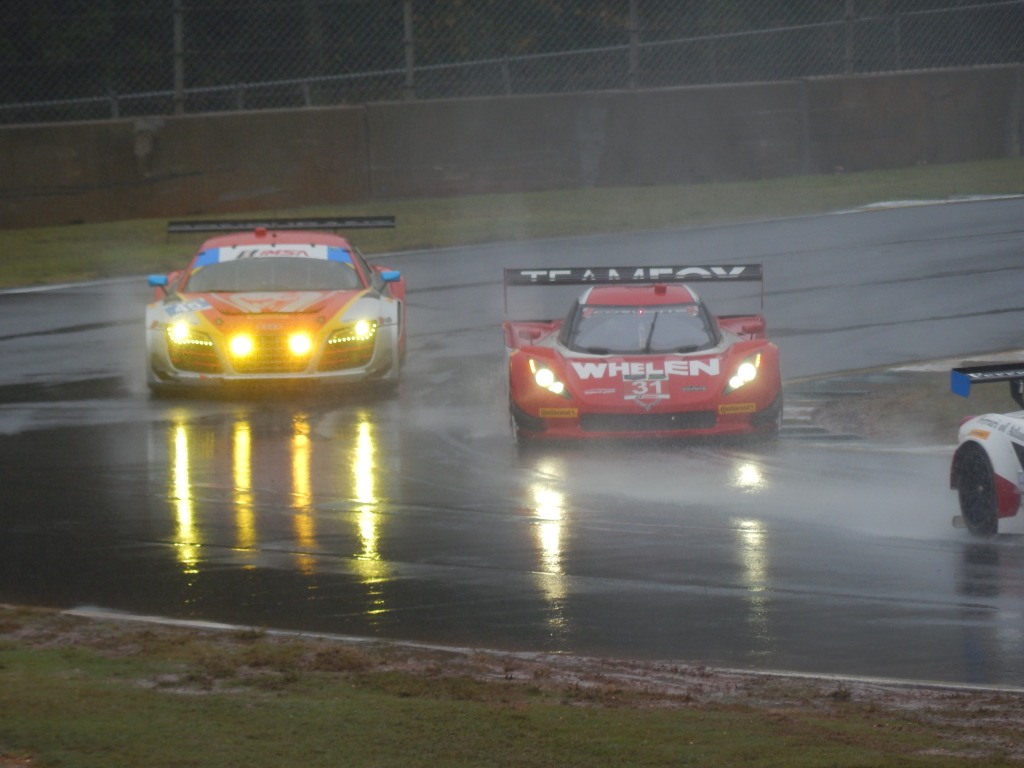 s wet. My clothing was soaked. My rain jacket that has kept me dry at eleven races since I added it to my wardrobe was drenched. My faithful and comfortable running shoes? Ruined. Gone. Sacrificed to the gods of red Georgia clay and downpours. Or maybe, to the racing gods. Because as much as Petit was by far the wettest race weekend I have ever attended, it was also one of the best. So maybe I finally figured out exactly what the racing gods are after when I beg them to shine their favor on a favorite team. Grey Nikes.

There’s so much to say about the weekend, so much to debate, so much to discuss, and pretty much all of it revolves around the rain. Did IMSA throw the checkered too early or too late? Were the conditions too dangerous? Did the green Porsche Beaux Barfield drove around the wet track several times REALLY win the race? I can’t answer those questions. There are people smarter than me who have those answers and while I can tell you that the podium celebration was a veritable monsoon, that doesn’t mean the right calls were made. I’m just a fan who goes to the races. 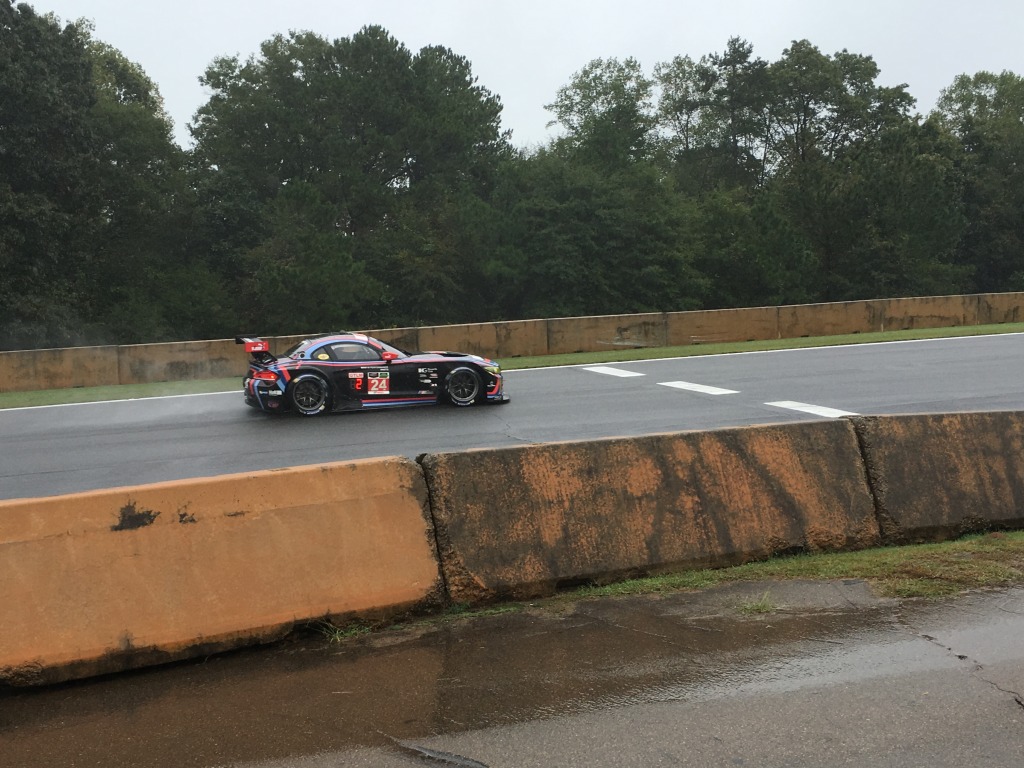 I can tell you all of that and maybe you would get it. Maybe, if you’re a racing fan who still genuinely loves the sport for all that it is and all that it can be, you’ll get it. Or maybe you’ll read it to a friend who calls you crazy and they’ll be inspired to check it out. I always say that the best way to create passion is to show passion but I don’t know if I can fit all of that into an even slightly enjoyable blog post. So I’ll break it down into three separate events and we’ll see if I can get across why I stuck around in the rain at Petit Le Mans this year. 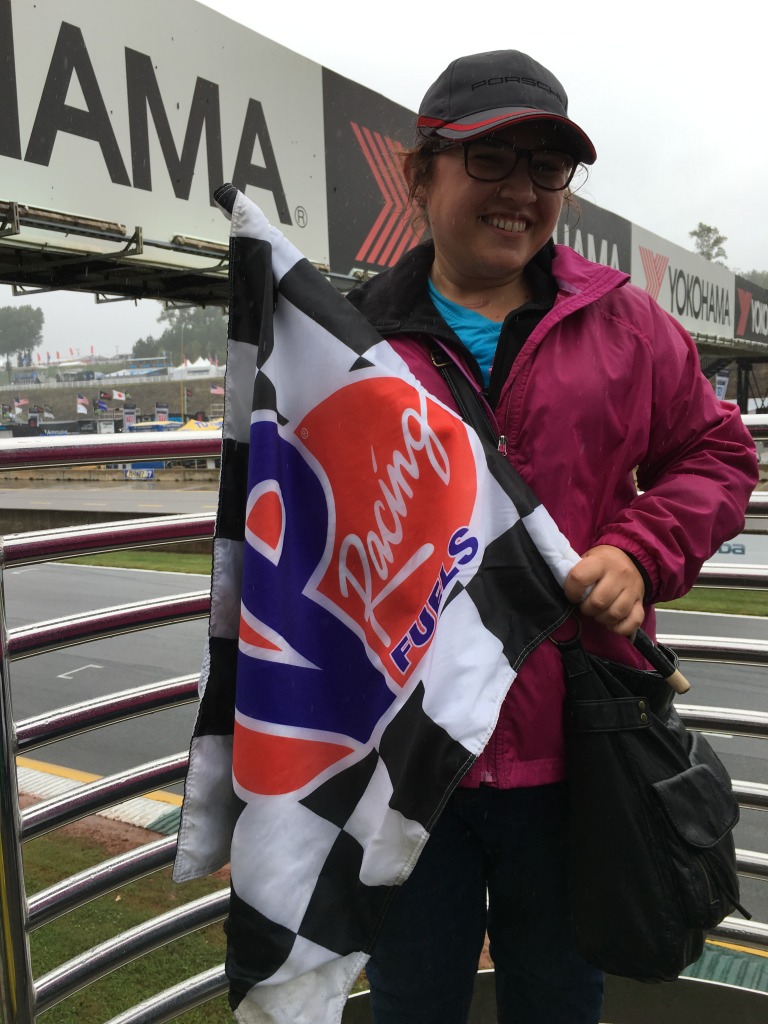 This year, IMSA has been doing something really cool. They’ve been having a scavenger hunt for what they call “the golden ticket”. Now, generally, that phrase gives me nightmares because Willy Wonka is hands down one of the creepiest movies I ever saw as a kid, but when I saw the tweet Friday morning about the hunt for the Golden Ticket, I was on it. The Golden Ticket gets you a trip to the starter stand for the beginning of the Continental Tire race. After an interesting search (with the help of Twitter, Periscope, and a friend at the track), I found the golden ticket. Now, I’ve watched the start of races from the pits before. I’ve stood in turn one at many tracks. At Daytona, I’m usually pressed up against a fence in the International Horseshoe, my heart pounding with excitement. None of them compare to what it’s like to watch a race start from the Starter’s Stand.

I can’t put into words what it feels like. When you look to your right and the cars are coming down that hill and onto the front straight. And the green flag waves and suddenly, your entire body is vibrating from the engines. You’re listening to the cars, as well as the officials (who were all super nice and very appreciative of how long I’ve been a fan) talking about what’s happening on track and it’s just…it’s really a feeling I can’t describe, but I hope every single racing fan has the opportunity to experience. Well done, IMSA, on giving back to the fans. 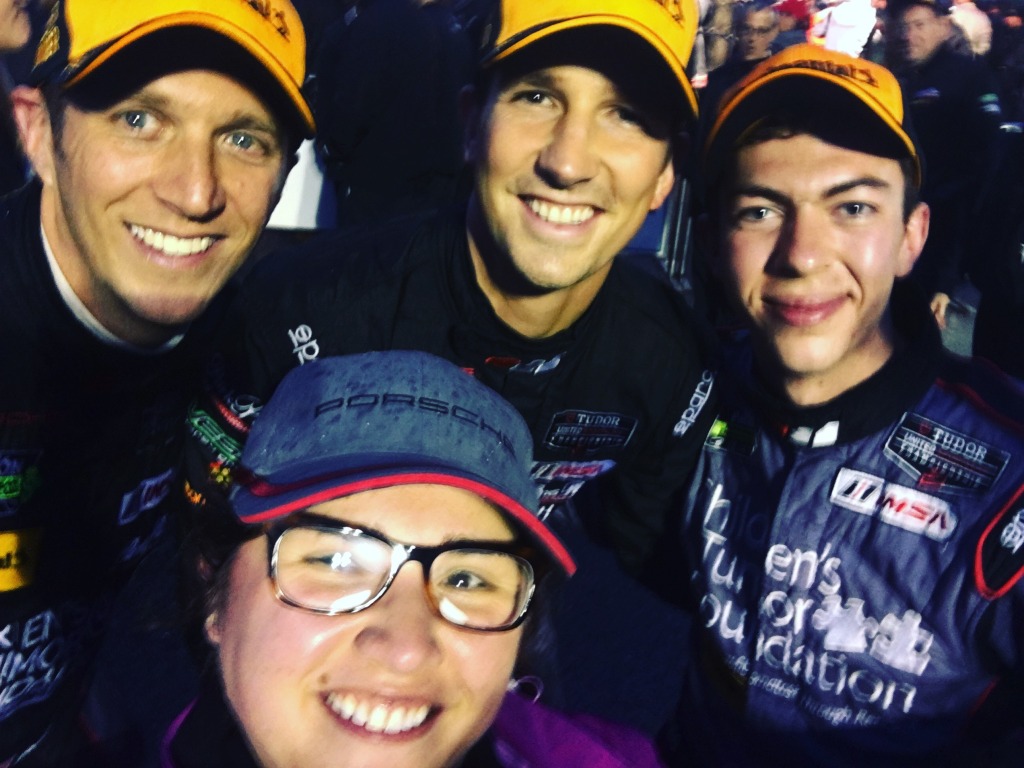 As probably the majority of you know, the race ended really suddenly. I was getting food when it was called and when I got the text message that it had been, I ran down the Road Atlanta Hill of Death in the rain to get to the podium. Two of my teams had won, one of which was a GTLM car that had won overall, and I was desperate to be there for the podium. Now, IMSA podiums are not famous for being fan-friendly and most of the time, you can’t get into them. It’s fine. No big deal. They had us behind the media and behind barriers, and I was standing right up against them, bouncing. Actually bouncing. (This can be corroborated by the broadcast, where I apparently can be seen behind Spencer Pumpelly, waving my hands frantically in the air). It was raining and I was surrounded by very drunk and wet fans who seemed shocked by the race being called.

I struck up a conversation with some of the fans and the reason why I’m going to mention the podium here is not just because I was thrilled to see the teams that were up there, but because so many of the fans talked about this being their first race and how much they loved it and how racing in the rain is awesome. Three guys had just decided to swing by and check it out, and by the time the GTLM podium was over, they were all making plans to go to Daytona and Sebring. By this point, it wasn’t just raining, there was a monsoon, the paddocks were starting to flood a bit, and these fans were still standing there, excited by what they were seeing. It was awesome to be a part of the celebrations of my favorite teams, but what struck me was the passion of the fans that night.

And finally, the RAIN. 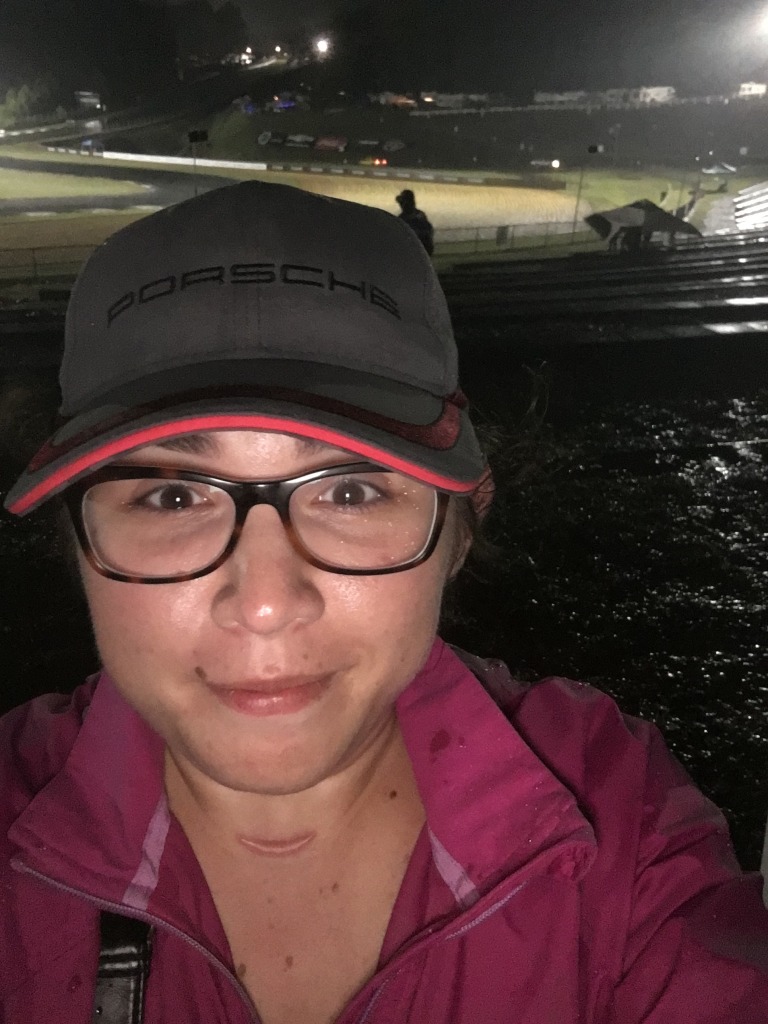 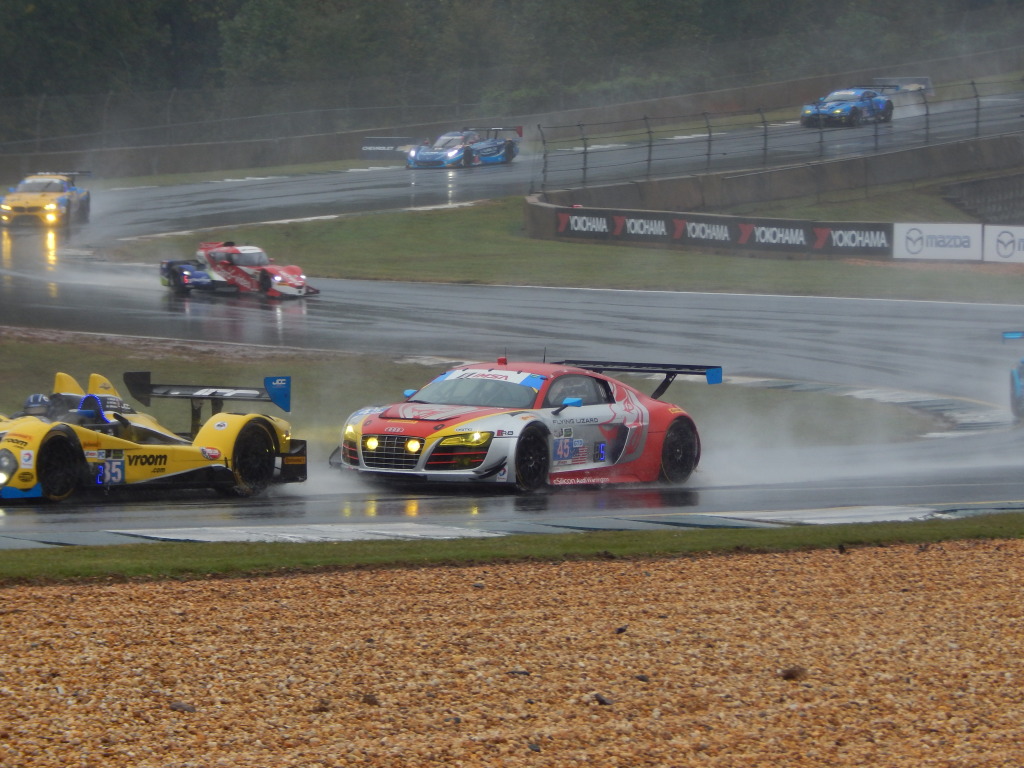 “Hey, how was your race weekend?”

You had to know I would bring it back to this. This was my third Petit Le Mans, and it has rained every time. But this? This race was the wettest race I had ever attended. From Thursday to Saturday, it rained, and it rained a lot. I had a friend message me and ask if the fans were leaving, if they seemed disappointed by the rain. And this is why I’m bringing it back to the flooded pathways, the mud pits, the cars that got stuck, and the umbrellas. No, the fans weren’t leaving. The fans stuck it out. Thursday during night practice, we had our first real downpour. Turn 10 was basically a giant mud hill, but the fans were there, huddled underneath their umbrellas.

And I guess that’s the question people keep asking me. Why do we stick around in the rain? Why did so many fans stand in the pouring rain all day to watch some sports cars circle the track? I think the answer is different for everyone, really. But when I think about a crew member telling me that I’m “a special brand of crazy but we love it”, I really try to come up with an answer. Because there was a point during the race, right before they called it, when I was standing in turn one. My jeans were muddy up to my knees, my shoes were ruined, I was soaking wet, and I just wondered what I was doing there. What makes me stay up all twenty-four hours of Daytona in the freezing cold at night? What drives me to the track at six-thirty in the morning? What possesses me to go to a race, get soaking wet, and still love it more than anything? 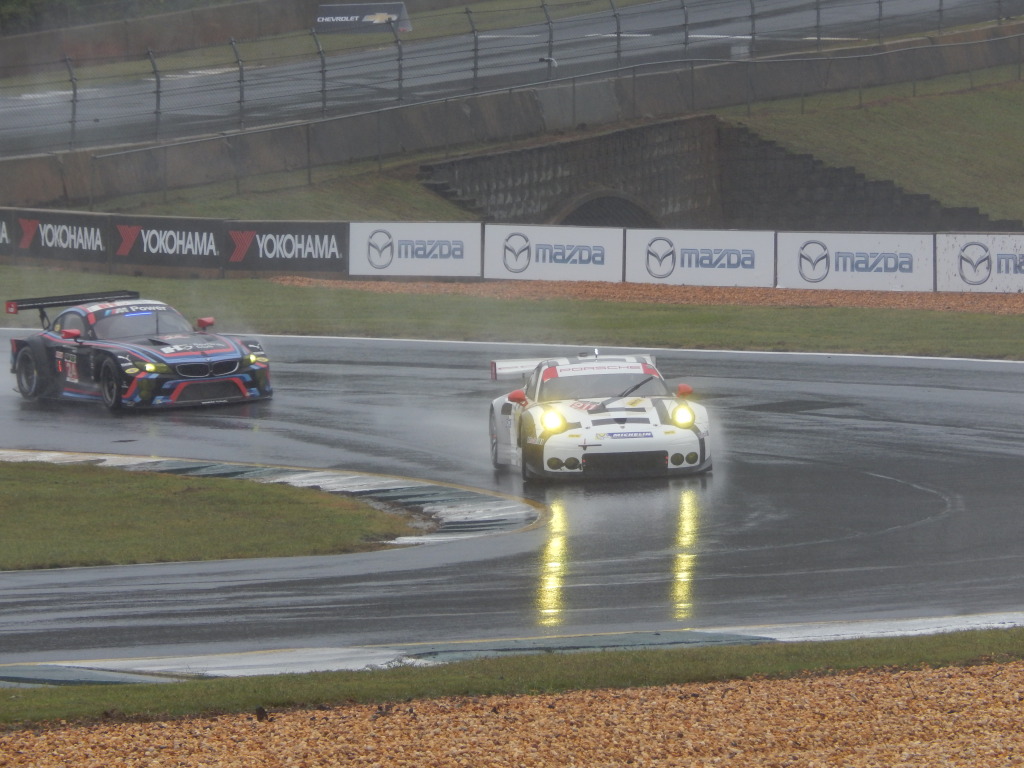 Honestly, I don’t know. But I think about that feeling I got in the starter’s stand, when my entire body shook from the force of the engines. I think about hugging one of my favorite drivers after he celebrated a huge win for his team. I think about the crew members and drivers who pulled me in out of the rain, gave me coffee, snacks, and then chatted with me. I think about what it’s like to be around people who love this sport, and maybe they can’t explain it either. Somehow, it’s a culmination of all of those things. Why do I do it? Because racing feels like home. Even when it’s pouring down rain, racing just feels like where I’m supposed to be.