To the Race Fan Who Saw Me in a White Shirt on a Rainy Day at the Race Track:

To the Race Fan Who Saw Me in a White Shirt on a Rainy Day at the Race Track:

UPDATE: The response to this from men and women all over has been overwhelming. Clearly my experience was one that needed to be shared, as women in the sport are also finding their voice and sharing their experiences, to prove this does in fact still exist. Some still don’t feel comfortable enough to share their stories, but for those who do, you’ll find them below my letter.  While the one small comment in itself may not be a big deal, what many are failing to see is this is something that happens all day to most women, and on a much larger scale. It all starts somewhere, and it’s not okay.  We’re not being too sensitive. This isn’t in our heads.

The first time this went viral, it was mainly in the motorsports community and the response was overwhelmingly mature and positive. So many women shared similar stories and men of character stood up to show their support. As it goes viral a second time, this time in the automotive community, the reaction has been dramatically different. My inbox is filled with sexually explicit, demeaning messages, attacking women everywhere. While these Donald Trump-esque comments come from a place of ignorance, they further prove our point that this is a very real problem.

So thank you, to those men who feel the need to seek me out, attack me and make misogynistic comments on my personal and professional accounts. You’re the reason why this needed to be said.

To the men who continue to respond with understanding and respect, thank you.

To the race fan who saw me in a white shirt on a rainy day at the race track:

I’d like to thank you for the support you have of our sport, and for wanting to connect to teams and drivers via social media. As a public relations representative, I thoroughly enjoy using means like social media to connect you to the sport.

But the other day, as I was going through the latest comments on one of the five business pages I was hired to manage for the race weekend, I saw yours. A fellow team member had posted a video from under the cover of our pit lane canopy during a downpour, and for a brief second, I walked in front of the camera.

Some fans remarked on the weather, while others sent us well wishes of safety. But yours stood out. 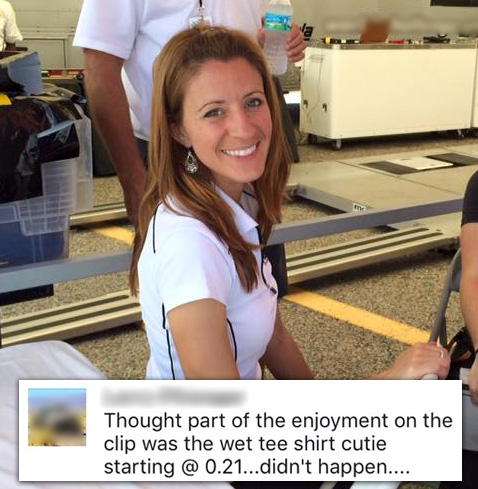 “Thought part of the enjoyment on the clip was the wet tee shirt cutie starting at @ 0.21…didn’t happen…”

I’m sorry to disappoint you, but in case my business shirt and business pants weren’t a clear indicator, I was at work, in a professional capacity, surrounded by my co-workers.

Your comment was not a private one said under your breath to a buddy. Instead, you posted it for the whole world, and more embarrassingly, you said it directly to my client. If you said it in front of one of my team members in person, I have no doubt they would have escorted you out themselves, after demanding you apologize, because they’re gentlemen like that.

While your comment may have been a light-hearted joke, it reflects an archaic, disrespectful attitude that still lingers in our sport.

Your remark echoes the opinion of two of my previous male supervisors. One told me women don’t belong in racing in a professional capacity. Another kept getting pulled into Human Resources because of the various sexual harassment complaints from his female employees. I wonder how his wife would feel if she knew he was trying to—and I quote—“cross the finish line” with his subordinates.

Last weekend at Sebring International Raceway, it made me proud to notice there has been an increase of female crew members, media and participants in the IMSA paddock. At no point were these women demanding special treatment, walking about exclaiming their sex, and they certainly weren’t hoping men would gawk, hoping catch a glimpse of a breast through a wet T-shirt (my polo was dry, by the way, sorry). They were there to work, plain and simple.

I have to laugh on the rare occasion when a woman says she doesn’t experience sexism in racing. Just last week, while I was completely in the zone, hustling from one pit to another, a crew member stopped me to tell me I need to smile. Two years ago, there was a crew member who did the same thing to me every time I walked by, telling me I was prettier when I smiled. Fed up, I finally asked him if he said the same thing to his male peers. His answer, “No, that’d be silly.”

To us, it’s just as silly to be said at all! In the media center last weekend, several of us women laughed over the sexist comments we get every day at the track. You can’t help but laugh sometimes because they’re that ridiculous when you think of if the roles were reversed.

As women in a male-dominated sport, our actions, the way we dress and how we interact with others gets noticed very easily and is more often than not open to more criticism. It never fails that when another “sexy” photoshoot is done to promote a female athlete, the rest of us get the, “why don’t you do that?” remarks.

I won’t speak for other women, but for me, I want people to notice my talent, ambition, integrity, work ethic and drive. A photo where I’m oozing sex appeal by showing my naked or almost naked body in a compromising position, or am covered in ten pounds of makeup isn’t going to show the world I’m strong, successful and talented. It shows I just want you to look at me and comment on my appearance.

I’m not here for attention regarding my physical appearance. I’m here to be an innovator in my field.

Like everyone else, us women worked hard to get here and we’ve earned the respect of our peers, as well as the fans. It’s my goal to continue to inspire change in the way we’re treated and spoken to.  I can only hope my letter to you reminds women at the track that we’re not objects for you to make disrespectful comments at, but business professionals trying to do our jobs, just like everyone else. It’s my hope that women respect themselves and their male peers, and that that respect is returned.

Ignoring or bushing off your distasteful remark does nothing. I’m not going to use your comment as a way to play the victim, and I’m not going to use it as means to shame you and cause childish drama. Instead, I’m using your comment to show that this kind of disrespect still exists and more people need to stand up against it, not ignore it, and certainly not encourage it.

Just as the actions of one can reflect on the many (as again, us women know all too well in this sport), I certainly hope my note to you doesn’t paint men in the sport as ignorant or misogynistic, because the truth is, the majority aren’t. The men I have the pleasure of working with in the paddock treat me as their equal; no special attention, no disrespect. I’m a business professional with 17 years of experience in this industry.

I’m here because since I was a teenager, I’ve spent almost two decades of blood, sweat and tears to become the businesswoman I am now, and to be treated as such.

I hope you have the comfort to walk into your own place of business without being made to feel degraded, cheapened or objectified. I hope you don’t have to deal with strangers “accidentally” brushing up against you, just to cop a feel. I hope people, while looking you up and down, don’t suggest you do a photo shoot in your underwear, just because David Beckham does it. Lastly, I hope people don’t make objectifying comments about your body to your employer’s business page for all to see. This happens every day, multiple times a day to myself and many other women, and it’s not okay.

I’m not here so you can publicly voice your desire to catch a glimpse of the body under my uniform.

When I’m at my work place, you will respect me and my co-workers, both male and female.

Devin: The first time I was ever catcalled was at a racetrack. I was 16.

Jana: My first boss in racing called me “skirt” and repeatedly said to me, “10 years ago, you weren’t allowed in the garages at Indy”

Sadie: The thing that really popped out to me was, “I hope you don’t have to deal with strangers “accidentally” brushing up against you, just to cop a feel.” I can’t tell you how many times this happens to me on any given weekend at the track or I get “Hey Red, How you doin?” and when I don’t respond, I get called a number of names…including the B-Word.

Sandra: The moment I walk around a track on my own some men feel entitled to comment on my body. One man once even felt the need to shout around a grandstand that the breasts of the half-naked promo girl on the grid were nicer than mine. Back in those days, I developed the habit of always wearing jeans, because I knew the merest hint of a skirt would provoke unsolicited comments by (drunk) male fans. I still stick to that habit today.

Katie: As a fan I’ve experienced a little of what you talk about, and sometimes I’m afraid to speak up. Because I’m afraid to be labeled as overly sensitive. The times I have spoken up usually yields mixed results.

Aislinn:  Upon walking into an interview with a superior, he said, “I really hoped you wouldn’t have been as pretty as you are.” Thinking, because of course I was trying to get a job, “Is that a compliment?” I responded, “Well thank you, but I don’t follow you…?” He said, “Well, we don’t want to worry about the drivers getting distracted…” He was flat-out accusing me of being a pit lizard but was concerned because he thought the drivers might go for it. I was so desperate, I took the job anyway.