This weekend on the Sahlen’s Six Hours of the Glen FOX Sports broadcast, sports car fans heard the story of Anthony Florio, the race fan who went the extra mile to give one of his favorite drivers, Bryan Sellers, a one of a kind gift. 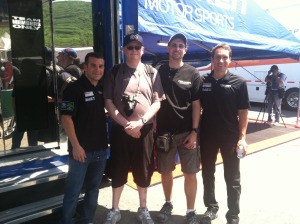 Contest winners Michael and Anthony in 2012 with Bryan and Wolf

We first met Anthony in 2012 when Bryan and I worked together at Team Falken Tire in the American Le Mans Series. We ran a social media trivia contest awarding the winner an hour long lunch at the track with Bryan and co-driver Wolf Henzler.  Anthony won the contest at Lime Rock Park, and had a relatively uneventful lunch with the drivers. Wolf had a flight immediately after the race and wanted to ask the locals the best way to avoid traffic in route to the airport. Unbeknownst to us, Anthony was losing interest in sports cars, and that lunch convinced him to stick around and give it another shot. Anthony and his brother John came to additional races in the years to follow, making their own shirts, buying official team gear, attending the garage tours, and always cheering on the team. 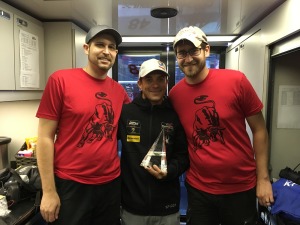 Fast forward three years to 2015. Bryan and Wolf won the 2015 Six Hours of the Glen, and following the win, the trophies went back to the Walker Racing’s shop in Indianapolis, where Team Falken Tire housed their GTLM operation. At the end of that year, Falken Tire closed down the GTLM program, and in winter of 2016, Derrick Walker sold the shop and everything inside it. The new owners gutted the building of all the racing equipment and memorabilia and promptly put it up for online auction.

When Anthony saw Bryan and Wolf’s trophies were among many of the items up for sale, he knew he had to get at least one of the trophies back to the drivers who earned them. While he couldn’t afford to bid on every trophy, he eventually bid on and won the 2015 Watkins Glen trophy.

Now in 2017, I have the honor to again work with Bryan, now at Paul Miller Racing in the IMSA WeatherTech SportsCar Championship. Saturday afternoon at the Glen, Anthony and his brother John stopped by the Paul Miller Racing garage, sporting their self-made shirts, printed with the names of Sellers and his co-driver Madison Snow. He arrived with a small box, offering to just leave it for Bryan to open later. I instead invited the brothers inside to the rear of the team transporter and brought Bryan out from the office. Watch the rest of the story here: 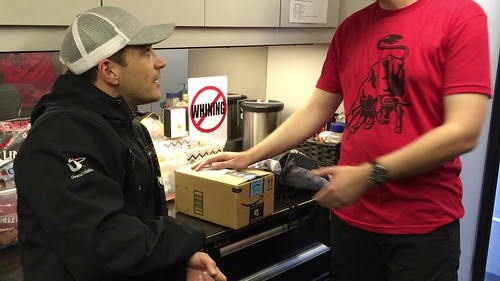