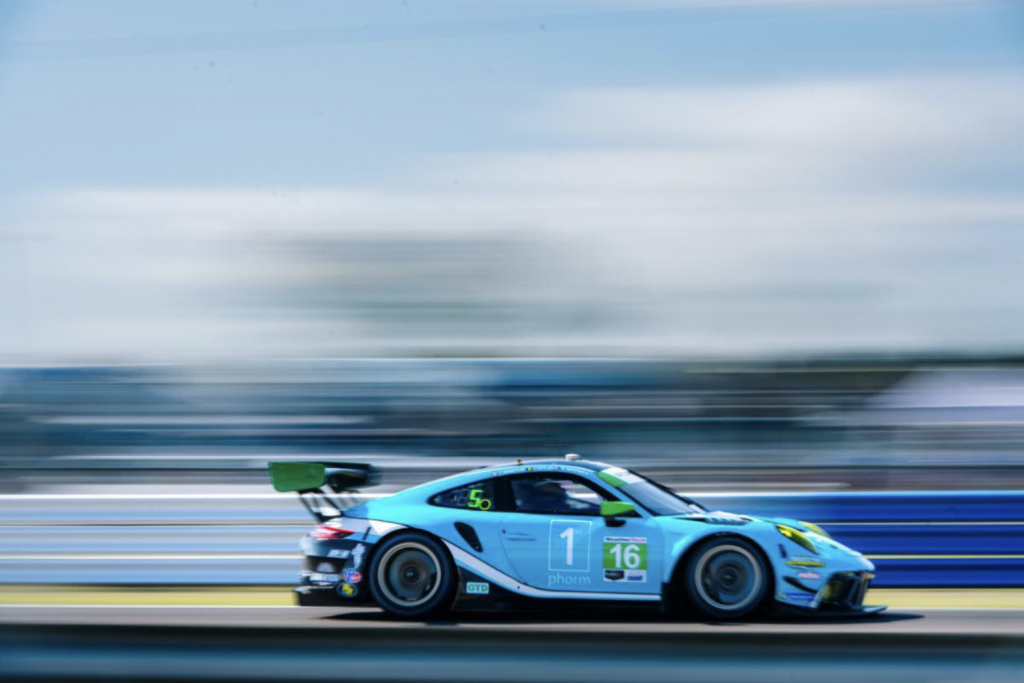 SEBRING, Fla., (March 20, 2022) – The Twelve Hours of Sebring on Saturday was a character-building race for Wright Motorsports. The Ohio-based team managed to rebound from an early-race setback to earn a top-ten finish in the No. 16 1st Phorm Porsche 911 GT3 R. After twelve punishing hours at the Sebring, Florida raceway, drivers Ryan Hardwick, Jan Heylen, and Zacharie Robichon brought the car home in tenth-place.

“Today was a hard race for our team, but the attitude of everyone on this organization shows what a quality group we have,” said Team Owner John Wright. “No matter how perfect you prepare or execute, things still happen that are out of your control. Everyone on our team immediately pulled together and got to work, never uttering a complaint. We got to work right away and never gave up on gaining back our lost ground. I’m proud of each and every one of them. The Porsche is a great machine that had the speed, and luck just wasn’t on our side today.”

Wright Motorsports entered the Twelve Hours of Sebring race week with high energy and high hopes, eager to keep the momentum gained from the team’s Rolex 24 At Daytona race win in January. The IMSA WeatherTech SportsCar Championship GTD points leaders looked strong in each of the four practice sessions, and the consistent performance carried over into the qualifying session. After an impressive qualifying display on Friday morning, Zacharie Robichon and the No. 16 Wright Motorsports Porsche earned a first-place starting position for Saturday’s big race.

Less than 15 minutes after taking the green flag on Saturday morning, Robichon radioed to the team that something was wrong while running in second place. Less than a handful of laps later the issue in the left rear corner of the car revealed itself, and the car temporarily left the competition to undergo repairs in the garage.

After expert services from the crew, the No. 16 1st Phorm Porsche returned to the fight about 40 minutes later, running 18 laps down. Robichon stayed behind the wheel to finish his stint, and then Ryan Hardwick took over for the next run, joining the race in 16th position. Echoing his co-driver’s thoughts, Hardwick said the current setup was challenging, using his analysis of the car to provide the engineers in the pit box with insight for the next set of changes in future pit stops. Jan Heylen took command of the Porsche in the fourth hour, taking advantage of the first full-course caution to receive a pass around procedure and regain a lost lap back.

The afternoon hours continued on as temperatures continued to climb, reaching a peak of 92 degrees Fahrenheit. With each stop, the engineers in the pit box used driver feedback to perfect the car’s setup, allowing them to put in consistent lap times and focus forward. As the race progressed, the majority of the field had one issue or another, bringing out a series of full-course cautions and race retirements. After the early race setback, the Wright Motorsports team enjoyed a relatively clean and drama-free run, utilizing each full-course caution to play the strategy and gain back a lost lap to climb back up through the field.

Around the halfway point, the team cracked back into the top ten in the GTD class, gaining back four of the 18 lost laps. In the end, the team’s rebound brought them a tenth-place result, holding third in the GTD championship standings leaving the second round. The IMSA WeatherTech SportsCar Championship next competes at the Long Beach Grand Prix street circuit in California, April 9. The one-hour, forty-minute event will be the first sprint race of the 2022 season and will host only three of the five WeatherTech classes. For more information, visit wrightmotorsports.com.

Ryan Hardwick
I’ve often heard that championships are won on your bad days. Well, our team finally had one of those days today at Sebring. The mechanical issue we had at the onset of the race was unfortunate, but our team never lost faith and they never backed down. Thanks to our dedicated team of mechanics we got our car back on track in quick order and clawed our way back into the top 10 by the end of the race. We are leaving Sebring sitting in the top three in overall championship points, and we will take that. I’m looking forward to getting the sprint races started with Jan and the team in a few weeks in Long Beach!

Jan Heylen
It was not the day we were hoping for, but there’s days like this in racing. It doesn’t make it any easier though. It takes so much preparation to come here and so much time and effort from everyone involved in our team. To be out of the race on lap four is tough, but we had a good comeback. The guys did an amazing job replacing a differential in such a short amount of time. To come back in tenth place is still good points for the championship. Races like this win or lose a championship, and it was an amazing team effort to come back from where we were to tenth place. A big thank you to all the team and I’m looking forward to Long Beach for some redemption.

Zacharie Robichon
It was not where we wanted to finish. Considering it was such a tremendous team effort, to still be able to finish in the top ten after missing the entire first hour is such a testament to the team. It was one of those things that is just a freak incident. Who knows what caused it and what we could have done. The team diagnosed it and got the car fixed. We lost some laps, but we never gave up. We had eleven hours to show our grit and determination and that’s what we did. We came back from sixteenth to tenth and it showed our team effort. Winning is easy but losing is much harder. We showed we can make the most of when we’re on our back foot, and ultimately, that’s what can win the team a championship.