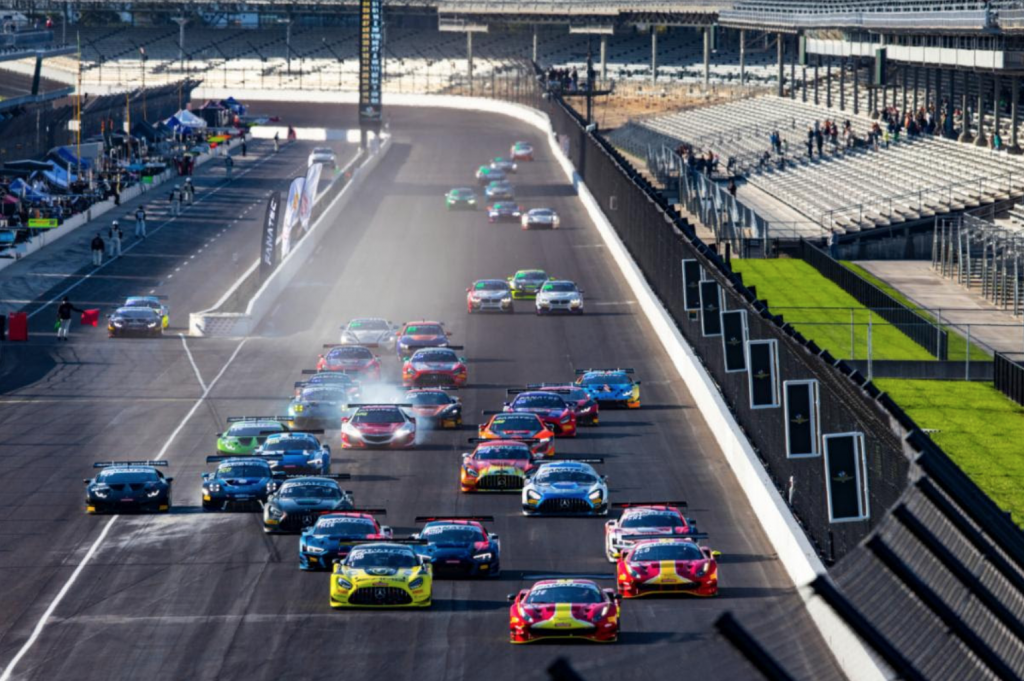 “I couldn’t be more proud of the team,” said Team Owner John Wright. “It’s really amazing. Absolutely everyone on our program contributed to make this possible, and I’m grateful for the work they’ve done all year. It’s great to celebrate Charlie’s first GT America title, as well as be back-to-back champions in GT World Challenge. It’s a standout effort by all.”

GT World Challenge America
The No. 20 Porsche 911 GT3 R looked strong leading into race day at the Indianapolis Motor Speedway road course, being one of the few Silver Cup and Pro/Am entries to make it into the pole shootout: a second qualifying session for the top 15 cars overall. The three average times from drivers Fred Poordad, Jan Heylen, and Max Root placed the Porsche as the 15th quickest car after the first round of qualifying. Heylen took charge for the 15-minute second round of qualifying, setting the ninth-quickest overall time in the pole shootout, besting several of the all-pro racing entries.

In sunny but chilly conditions, Poordad started the Indianapolis 8 Hour from ninth place overall, second in class. The field became heavily congested headed into turn one, and Poordad moved safely to fourth-place to keep the car clean for the long race ahead. Multiple bouts of contact happened in the opening stint for all drivers, bringing out the first full-course caution just four minutes into the race. The No. 20 Porsche 911 GT3 R was among those unable to escape the incident, with Poordad receiving heavy damage from another car early on. Nine minutes into the race, he pitted so that the team could assess the damage to the right-rear corner of the car. He was cleared and rejoined at the rear of the field in 38th. For the remainder of his stint, Poordad worked his way through traffic, breaking back into the top-fifteen before completing his run.

Heylen took over once Poordad’s stints were over, but calamity found the Porsche team only 90 minutes into the race. A BMW made heavy contact with the Porsche, resulting in a flat right-rear tire. After making it to pit lane and receiving a new tire, the Porsche showed extensive damage and needed to go back to the garage for a 25-lap repair.

The team rejoined two hours into the race, with Heylen running several shakedown laps to make sure the car was raceable. Max Root was next to take over, bringing the Porsche to the halfway point and running for the next two hours. It was with three hours to go that the Porsche again stopped on track, unable to finish the race after getting tagged multiple times by fellow competitors in a congested field. Despite the setbacks, Wright Motorsports had enough of a points lead over DXDT Racing that the Ohio-based operation was able to secure the 2021 Team Championship to go alongside with the 2021 Driver Championship they secured two weeks prior at Sebring International Raceway.

Fred Poordad | No. 20 Porsche 911 GT3 R
Well, that was a heck of a 2021 season for us at Wright Motorsports. In the SRO GT World Challenge, we won the drivers’ championship and wrapped up the team championship today, which was really our goal for this event. The 8 Hours of Indy didn’t really go our way; we were a bit of a ping pong ball out there. We took a lot of abuse, but at the end of the day I’m super proud of the team and the drivers. Jan and Max did an outstanding job, and we gave it everything we had until the car finally said enough was enough and we couldn’t finish the race. We did enough to win the team championship, so super proud of the team, and the effort. I’m very thankful to Wright Motorsports, my co-drivers, and all of the people that made this possible for us. I want to also thank the SRO Group and GT World Challenge group; they did an amazing job this year and we’re very happy with how everything went.

Jan Heylen | No. 20 Porsche 911 GT3 R
This weekend was a good team effort. I was hoping to finish the season with a good race result and we were all excited to be here with the full grid. We never really got to show what we could do here. It was busy out there. We had contact with a GT4 car and it’s unclear right now if that’s the cause of the brake issue we were having. I’m disappointed for the team, for Fred, for Max. We did win the driver championship and the team championship, so it’s been a really good season. Winning both championships is an amazing result for all of us at Wright, myself and Fred. That was our first goal at the start of this race: to get the first three hours out of the way and clinch the championship. We got used to finishing on the podium. Good effort by everybody, it just wasn’t our weekend for the 8 Hour. We’ll hopefully come back next year and try again.

Max Root | No. 20 Porsche 911 GT3 R
It was a tough day today at Indy. Everyone on the team did the best that they could, but some unfortunate contact with a GT4 car kind of sent us down a spiraling road where we had to retire the car after hour five. I’m super happy with everyone’s effort. I definitely want to come back next year and try to redeem ourselves.

GT America
Charlie Luck closed out the year in a celebratory fashion, not only securing the 2021 Masters class championship title, but also going a step further to clinch the overall championship as well.

Luck took the green flag for race one on Friday afternoon, knowing the No. 45 Porsche 911 GT3 R needed to stay several positions ahead of Reardon Racing’s Jeff Burton in order to take top honors. Per his usual performance, Luck ran a clean and trouble-free race, while Burton suffered trouble mid-race, losing valuable ground in his championship effort. The No. 45 Porsche drove to the Masters class victory with a gap over Burton large enough that he drove to victory circle as the 2021 champion.

With no pressure to secure the title, Luck sailed through the second race, setting the fastest lap and taking his ninth victory of the 2021 season.

Charlie Luck | No. 45 Porsche 911 GT3 R
This season was a culmination of five years of hard work on everyone’s part within Wright Motorsports and everyone that supports me here in Richmond, Virginia. From practice to simulating to nutrition to exercise to the people at PitFit Training, it took supreme team effort on everyone’s part to win both the SRO Masters and SRO GT America Overall championships.