Wright Motorsports Unveils Livery and Lineup for Rolex 24 At Daytona

Wright Motorsports Unveils Livery and Lineup for Rolex 24 At Daytona 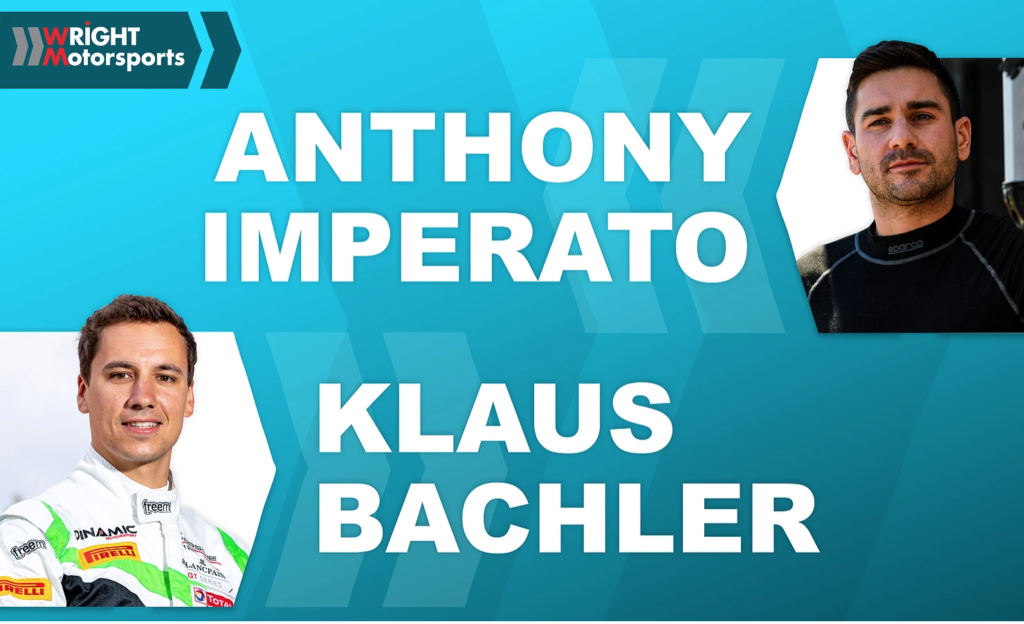 BATAVIA, Ohio, (December 20, 2019) – The final details for the Rolex 24 At Daytona Wright Motorsports No. 16 Porsche 911 GT3 R have been secured as the team prepares to begin its 20th year of professional competition in sports car racing. Anthony Imperato and Klaus Bachler will join Ryan Hardwick and Patrick Long in the 1st Phorm Porsche in the IMSA WeatherTech SportsCar Championship season opener, taking place January 23-26.

“We’ve put together an incredible lineup to kick off the 2020 season,” said Team Owner John Wright. “I’m thrilled to have Anthony and Klaus back behind the wheel. They’re perfect additions to what we know is a strong effort. We’ve been incredibly productive with off season testing, and we’re ready to get 2020 started.”

As previously announced in October, Anthony Imperato is returning to the team for his fifth consecutive year, kicking off the new season with the Rolex 24 At Daytona. Continuing his relationships with Porsche and Wright Motorsports, the young racer has climbed the motorsport ranks of the IMSA Porsche GT3 Cup Challenge and SRO America Championship, to return to the IMSA WeatherTech SportsCar Championship’s GTD class. The remainder of Imperato’s race season plans with primary sponsor Henry Repeating Arms will be announced at a later date.

A former Porsche Junior driver, Klaus Bachler will bring with him a strong Porsche racing resume, returning to the team for the first time since his 2013 outing with Melanie and Madison Snow, Marco Seefried and Sascha Maassen. The young Austrian is no stranger to endurance racing, having also competed in the 24 Hours of Le Mans three times, and earned two podiums and eleven top five finishes in the FIA World Endurance Championship.

The No. 16 Porsche will debut its 2020 livery in less than two weeks at the Roar Before the 24, the first official all-series test in the IMSA WeatherTech SportsCar Championship. Building on the team’s 2019 livery, the main body of the car will be 1st Phorm blue, with sweeping white lines flowing with the car’s body to the black rear.

All four classes in the IMSA WeatherTech SportsCar Championship will have ample track time at the Roar Before the 24 at Daytona International Speedway, January 3-5. At the end of the three day test, participants will qualify for pit box location and garage space for the first race of the season, the Rolex 24 at Daytona, January 23-26.

I’m very excited to be racing in my first 24 hours of Daytona with Wright Motorsports. It still doesn’t feel real. We have a good driver line up and I feel confident we can have a good result. I’m grateful for all that are involved in making this happen and I can’t wait to get started at the Roar.

I am highly motivated to kick off 2020 with this awesome event in Daytona and to be back with John Wright and his great team. As many other drivers, I love racing in Daytona as it is a special racetrack with 24 hours of excitement. I am really looking forward to the race in Daytona, with a strong line-up. Can’t wait to work together with Anthony, Patrick, and Ryan.

Our lineup is locked in, the livery design is finished, and we’re ready to go. I’m happy with the strides we’ve made with all of our off season activities on and off the track, and I’m excited to represent 1st Phorm and Mountain Motorsports on such a fantastic looking car. The livery turned out great and I can’t wait to see it on track. With this lineup, we’ll do everything we can to get the No. 16 Porsche to victory circle on race day.

The competition of GTD seems to only grow year on year, and we have everything we need to put in a strong effort. Everyone has done a great job in our off season efforts, and we’re ready to get on track with the rest of the field and see where we stand. Balance of Performance has the racing so close, it puts unheard of pressure on track position, strategy and pit stops, and per usual, on drivers to be mistake free and on the ragged edge. It’s a lot of pressure, but we’ll be ready.

1st Phorm is a sports nutrition company based in St. Louis, MO. In 2009, CEO Andy Frisella and his business partner Chris Klein started the brand, and since then, it has become the fastest growing supplement company in the world. 1st Phorm has set the standards in the industry for quality and helping people reach their goals. This new racing partnership is not their first time in the exotic car scene either. 1st Phorm has been the title sponsor for the Gold Rush Rally for six years running. With over a million followers across social media, 1st Phorm has amassed a huge cult-like following known as, “The Legion of Boom.” They stand for a movement in the fitness world. To turn it back to what it was meant to be. Helping others improve their lives, to be a good human… and to drop the excuses and do the work. 1st Phorm is a winning brand and they don’t expect anything less when it comes to their race team. For additional info: www.1stphorm.com

Mountain Motorsports is a group of motorcycle and powersports dealerships with multiple locations in the southeastern United States. The company was founded by lifelong friends Ryan Hardwick and Justin Price when they opened their first location as a single-line Honda dealership in Sevierville, Tennessee in 1999. The company has since grown into one of the largest retailers of motorcycle and powersports vehicles in the nation, spanning eight dealership locations representing eleven of the industry’s most well-known brands. For additional info: www.mtn-motorsports.com

Wright Motorsports is the premier Porsche race engineering facility in Ohio and a multi-series, international racing team known for superb car preparation, expert race strategy and driver development. Located in Batavia, Ohio, it is owned and directed by John Wright, a certified Porsche factory-trained technician. As a crew chief John Wright has played a key role in winning eight driver and seven team championships in World Challenge, IMSA (ALMS) and the Grand-Am Rolex Series. Wright Motorsports won the team championship in Porsche GT3 Cup USA in 2012, 2013 and 2015, and went on to win the Pirelli World Challenge Overall, Sprint, Team and Manufacturer’s titles in 2017. The 2020 season will see the team return to IMSA Weathertech SportsCar Championship. For more information, visit wrightmotorsports.com