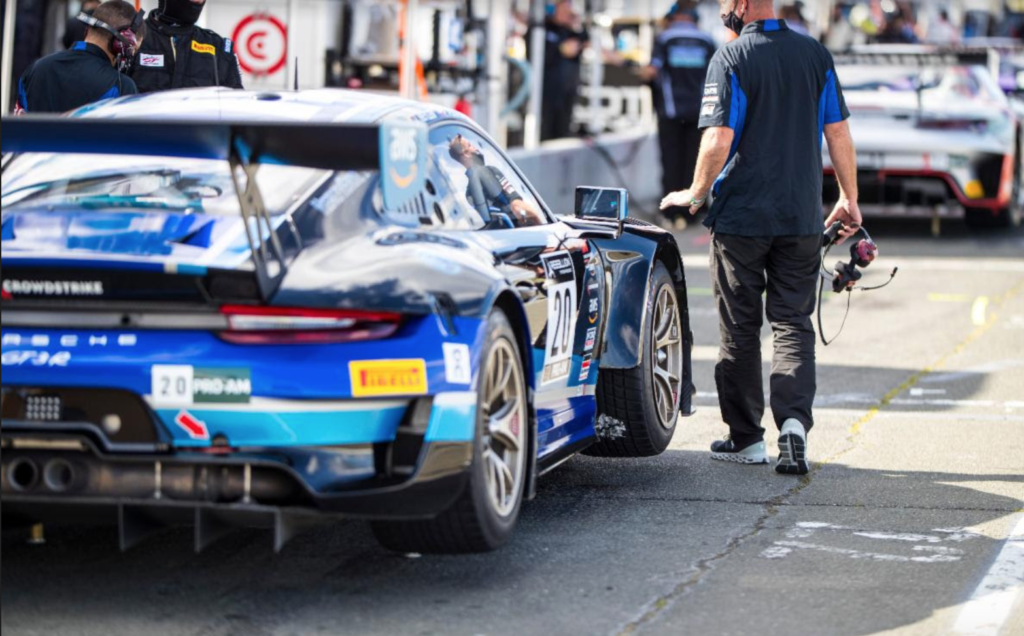 SONOMA, Calif., (March 8, 2021) – After a successful weekend for the first two rounds of the GT World Challenge America and GT America, Wright Motorsports takes the points lead for each series, earning three wins and one podium finish in four races.

In the Fanatec GT World Challenge America powered by aws, Fred Poordad and Jan Heylen made their Pro/Am class debut in the No. 20 Porsche 911 GT3 R, securing a first and second place finish in races one and two, respectively. Poordad competed in the Am class last year, and after securing the 2020 championship with co-driver Max Root, he advanced to the Pro/Am class with longtime Wright Motorsports driver Jan Heylen.

Fred Poordad started race one from eighth overall and fourth in class behind the Compass Acura NSX and a pair of DXDT Racing Mercedes AMG GT3s. Contact ahead between the two Mercedes in the opening turns sent one spinning off course, which Poordad was safely able to avoid. He lost a position to the TR3 Racing Lamborghini on the start, but after the early race incident between the two Mercedes, he was able to take back his spot and pull away to create a 0.5 second gap. Jeff Burton and the Reardon Lamborghini joined the fight, putting heavy pressure on Poordad. He led a train of four cars, running sixth overall, eventually creating a nice cushion for the No. 20. The chase between the Porsche and the Lamborghini lasted for almost the Am’s entire stint, with Poordad acquiescing in the final laps of his stint. Poordad pitted from seventh, and true to Wright Motorsports form, quick work in pit lane moved the Porsche up to rejoin in fifth position overall with a five second lead over Dakota Dickerson. He gained another overall position before a full course caution was declared, grouping the entire field back together. The race returned to green, and Heylen and the No. 20 Porsche drove to victory, securing the Pro/Am class win, and a third-place overall podium position. The pair currently leads the 2021 Pro/Am championship, with a six-point lead over Braun and Kurtz.

Since he finished the previous day’s race, Heylen started race two for the No. 20 Porsche, taking the green flag from second in class and fourth overall. The pole sitting Lamborghini had an issue on the start, and Heylen took advantage, sliding into second place overall behind the new race leader, Colin Braun in the No. 04 Mercedes. The pair ran 1-2 for the entirety of their stint, and Heylen pitted during the mandatory pit window for the No. 20 Porsche to get a new set of tires, a tank of fuel, and have Fred Poordad take over. Poordad rejoined behind the No. 04 Mercedes, which now had George Kurtz at the wheel. The pair held position to the checker flag, with the Wright Motorsports entry finishing fourth overall and second in the Pro/Am class.

Charlie Luck made his GT America powered by aws race debut Saturday morning, starting from pole position in the Masters class and third place overall in the No. 45 Porsche 911 GT3 R. He had a clean start and took second place with some pressure from behind until the car in second place spun, giving Luck a little breathing room. The race leading Mercedes of George Kurtz created a 21 second lead but was forced to serve a drive through penalty for leading the field to green two slowly. Luck assumed the class lead with 14 minutes remaining, though Kurtz, running in the faster class, took the position back in the final laps. In his first race with the Porsche 911 GT3 R, Luck secured the victory in the Masters class, setting a fast lap to start from third overall on Sunday.

Again taking the green flag from the class pole position, he quickly created a sizeable gap over the competition, and then made the pass over Jason Howard for second place overall. A full course caution closed the one second lead George Kurtz had over Luck, and they went back to green with eight minutes remaining. Luck maintained his position to the checker flag, taking second place overall and securing his second win of the season. His back-to-back victories give him a 17-point lead in the Masters class heading into the next rounds of the championship.

Circuit of the Americas will host the next two rounds of the two championships April 30-May 2. The series raced at the Austin, Texas circuit twice last year, where Wright Motorsports earned two wins and two podium finishes. Until then, the team will continue to test in preparation for the remainder of the season. For series information, visit sro-america.com

Fred Poordad
Well that was a heck of a race one, and a great way to start the season at Sonoma Raceway. We struggled with car set up all weekend., but the team put it together for us and gave us a great car. Happy with the outcome of race one, finishing first in Pro/Am. We took our chances and opportunities when we could, and this is a good building block for the season. As for race two, I came out behind the 04 Mercedes, and didn’t have the pace to keep up. That was really the difference. Overall, given how quickly this season came about and how little we tested, I’m happy with my results and the rest of the season. Wright gave us a great car today, and I know they will for the whole season, so it’s up to the drivers.

Jan Heylen
We’re here to win the championship, so this is a good start to the season. We had enough pace to win in class in race one, and all that matters is we got the win and we got the points. It was not a perfect race for us but things came our way and it was sell deserved. We stayed out of trouble and gave Fred his first win of the season. Race two was a little more tough, but we did the best with what we had. We finished second and came away as the points leaders, that’s what we’re here for. Overall it was good. We had a good race weekend, especially when you consider we only had one test in the off season. I’m happy with the results and looking forward to Circuit of the Americas.

Charlie Luck
Coming from a Cup series, I didn’t know if I was going to be competitive here. The car is totally different than the Cup car. So a big thanks goes out to Bob Viglione, John Wright, and Jan Heylen. Those guys have given me such a good set up and have done a great job coaching me, even on nutrition and exercise. The support from my wife, Lisa and our family is incredible. This weekend absolutely exceeded expectation. I didn’t make any major mental mistakes, and in race two, I pushed even harder and was closer to Kurt’s pace than before. I have so much more to learn, and so much more to grow. We’re so fortunate and blessed to do this and get in the cars to compete like this. I think we have a phenomenal start.