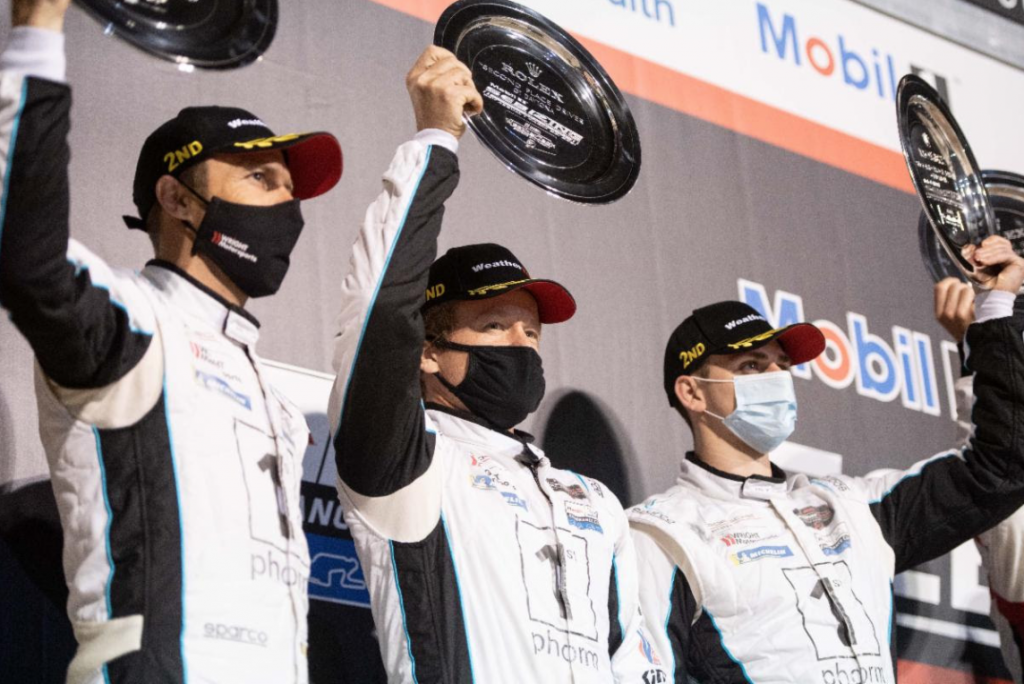 “All in all, it was a strong weekend for us,” said Team Owner John Wright. “It took a lot of work by everyone on the team to get the WeatherTech, Michelin Pilot, and Porsche Cup programs up and running for this weekend, and I’m proud of how well everything was executed. We had our challenges on track, but we earned some solid points in two of the championships.”

IMSA WeatherTech SportsCar Championship
For the second consecutive year, Jan Heylen captured the pole position in the No. 16 1st Phorm Porsche at the Twelve Hours of Sebring. The team showed dominant pace throughout the entire race as drivers Heylen, Patrick Long, and Trent Hindman worked through the driver rotation. Through fuel saving, competitive driving, and smart calls in pit lane, the Porsche showed itself to be a strong contender for all twelve hours of the race on the incredibly demanding course. Each of the three drivers had their turns at the front of the field, commanding the Porsche through multiple classes and lapped competitors, at one point, leading the field by over twelve seconds. In the end, after twelve tense hours, multiple full course caution periods, and several pit stop competitions later, the race for the lead came down to the final moments, just as it had the year prior. A late-race full course brought the field back together, ready to fight for a final sprint to the checker flag with less than 20 minutes to go. In the end, it was a battle of the Porsches, with the Wright Motorsports Porsche behind the Pfaff Motorsports machine. In the end, the Wright car finished second, giving the manufacturer a one-two finish, and catapulting the 1st Phorm car to the top of the GTD class point standings. The team also secured the win in the Michelin Endurance Cup, in which points are awarded at various race intervals throughout each of the four endurance races on the calendar. Mid-Ohio Sports Car Course will host the third round of the 2021 championship, which will also be the first sprint race of the season. The race will have a runtime of two hours and 40 minutes and only include the DPi, LMP3 and GTD classes.

Patrick Long
“It was a great end result. The final restart was timing with traffic. Once we got into clear air, I thought we had something to fight for the win with the Pfaff car but in the end, it was just where the traffic caught you. Ultimately, a Porsche one-two is a great result. It is awesome to get the Wright car up into the championship lead and push forward into the rest of the season.”

Jan Heylen
“That is a good result, and for the championship, it was a great race. At the end of the day, it was a good weekend. Of course, you always want to win and it doesn’t always come your way. Well-deserved for the nine-car. I am happy that one of the Porsches won. I want to thank Ryan [Hardwick] and the whole team for their support. I look forward to coming back and doing it again.”

Trent Hindman
“Huge ‘thank you’ to the Wright Motorsports team, Johnny Wright, Ryan Hardwick,1st Phorm and Mountain Motorsports for giving me the opportunity to run once again with these guys. It is an absolute pleasure. That was so close to a great result. We had a super-fast race car. At the end of the day, second puts these guys in a fantastic championship position. Of course, we always want to win but it is just good to see a Porsche upfront and to have Wright Motorsports in the hunt.”

Michelin Pilot Challenge
After an impressive qualifying session where he secured pole position by almost a full second in his Michelin Pilot Challenge debut, Max Root led the field to green on Friday morning. In the No. 16 1st Phorm Porsche 718 Cayman GT4 Clubsport, he wasted no time in pulling away, leading his entire stint with no pressure from behind. He finished his run and passed the driving duties off to Jan Heylen, joining in second behind Bill Auberlen, but quickly passing to take the lead back from the BMW. He held position to the final rounds of pit stops, and rejoined in the top three, as the cars ahead of him decided not to make a second stop for fuel. With five minutes remaining, Heylen pushed forward in second place, and the race leading No. 71 Camaro began to have issues, dropping oil over the track, forcing Heylen to slow and take extra caution to avoid any calamity. Although the competitor was given a mechanical black flag, meaning the car had to pit, it stayed out and took the checker flag in first place. No post-race penalty was assessed, and the Wright Motorsports entry finished second. The podium result in the team’s first Michelin Pilot Challenge race rewarded the team with a solid points weekend, offering momentum to take to the next event. Round three of the two-class series will take the competitors to Mid-Ohio Sports Car Course, May 15th, where full-season driver Ryan Hardwick will resume his driving duties alongside Heylen.

Jan Heylen
“I am disappointed we didn’t win the race, obviously. We led most of the race and it looked like we were going to come out on top. We saw toward the end that the Camaro was going to go long [on a fuel stint] without making an extra stop. It was a good effort on their part. Certainly not something that was in the cards for us. At the end we started chasing them and I think we still could have won the race but the Camaro started spitting oil. I lost the car at three big moments behind them, almost going off track as they were dumping oil. It wasn’t worth the risk to get too close to them and potentially damage our race and the result. So we just hung back there. Good points for the championship. I’m very happy to have done the race with Max, and happy to be on the podium with him.”

Max Root
“It was a good race. I had a strong opening stint. The Wright boys set up the car pretty amazing. I handed it off to Jan and he did a great stint there. I think we did everything we could. Thank you to everyone at Porsche and Wright Motorsports.”

Porsche Carrera Cup North America
While no podiums were secured in the debut of the Porsche Carrera Cup North America, each driver made a strong debut, despite moments of attrition. Hutton McKenna earned a top ten finish in the inaugural event while racing a livery that paid homage to the Alex Job Racing Porsche his dad raced in the 2000s. The young racer was able to consistently improve over the course of the weekend and will surely prove to be a competitive force in the one-make series as the season progresses.

Pro-Am driver John Goetz also kicked off his first race of the Porsche Carrera Cup North America well, earning a fifth-place finish in the Pro-Am class. While his second race didn’t go as planned, Goetz and the No. 57 Porsche still had a strong debut and will look to be a contender in the next rounds.

Although he had a strong pre-race performance and solid starting position for race one, Max Root fell victim to a punctured tire at the start, which immediately deflated and caused a spin. Another competitor collected his car as the field drove by, resulting in Root being unable to finish the race. In race two, his poor luck continued when another competitor drove across the nose of his car, removing the car’s splitter. Further damage occurred upon trying to recover, and the No. 7 retired from the race.

The next round of the 2021 Porsche Carrera Cup North America is slated to held May 20-23, pending any changes to the IMSA schedules that may occur. To stay up to date on all the latest news and information, visit wrightmotorsports.com to subscribe to our distributions.

John Goetz
No. 57 Porsche GT3 Cup
“It was wonderful to part of the excitement of the first Carrera Cup North America race. I didn’t have the best of runs and I’m still adapting to this new machine. It is a great new Cup car that clearly has potential. Thanks to the Wright team for their great support and quick mechanical work. And thanks to my teammates Hutton and Max for great conversations about the car and driving.”

Hutton McKenna
No. 88 Porsche GT3 Cup
“I can’t thank the Wright Motorsports team enough for their support in my first Carrera Cup race. The car is very dialed in, and I only hope to advance in the field as the season goes on.”

Max Root
Moorespeed-Wright Motorsports No. 7 Porsche GT3 Cup
“It was a tough weekend to start out the first round here. I definitely learned a lot, and I’m grateful for the team for putting everything together and keeping us quick while we were on track. I’m looking forward to the next one. Thank you to everyone on the team for all their hard work.”