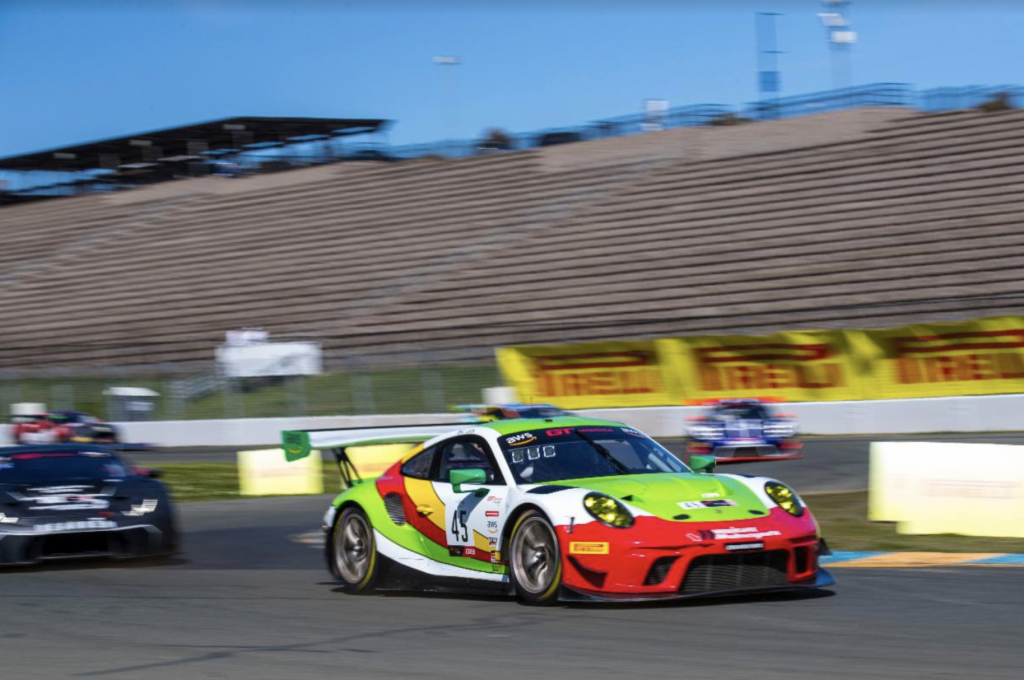 SONOMA, Calif., (April 17, 2022) – Wright Motorsports drivers Charlie Luck and Jan Heylen made their debut as teammates in the Fanatec GT World Challenge America powered by AWS and swept the event, taking both wins in the Pro/Am class this weekend. Hutton McKenna also made his own debut in the GT America powered by AWS championship, closing out the weekend at Sonoma Raceway with a win of his own.

“It was a great weekend for both of our programs at Sonoma Raceway,” said Team Owner John Wright. “While Jan was new to the series, this year is a step up for both Charlie and Hutton, and they did a great job in their new level of competition. We’re starting the season off on the right foot, and we’re excited to see what’s in store. We have some championship titles to defend, and this is the right way to get it started!”

Fanatec GT World Challenge America powered by AWS
After winning the inaugural GT America championship last season, Luck returned to SRO America this year, stepping up to the GT World Challenge America series with 2021 Pro/Am Champion Jan Heylen. He transitioned from 40-minute, single-driver races to a pair of 90-minute races he shares with his new co-driver. The two took full advantage of the days leading up to the races, practicing not only their on-track performance but driver changes in and out of the No. 45 Porsche 911 GT3 R as well.

Charlie Luck took the green flag in his first GT World Challenge America race starting from seventh overall and second in the Pro/Am class. He had a strong start, sliding into sixth place behind the Pro-ranked No. 3 K-PAX Racing Lamborghini of Misha Goikhberg. After he made an early pass on class leader Chandler Hull in the No. 94 BMW, Luck held off Hull to the conclusion of his smooth and clean stint. Luck pitted during the mandatory pit window to give the car over to co-driver Jan Heylen with a tank of fuel and new, hot tires. Pit stops cycled through and Heylen stayed up front, though an eager Colin Braun in the No. 04 Mercedes began to close. With every turn, Braun tried to find a window to make the pass on Heylen, but the Porsche stayed out front, the Belgian wisely making sure not to give his competition any opportunity. Heylen kept the position to the checkered flag, celebrating not only his first win with his new -teammate and father-in-law but also Luck’s first win in his GT World Challenge America debut.

The pair started from fifth overall and second in class on Sunday afternoon for race two. The No. 94 class-leading Acura of Mario Farnbacher started in the row ahead. The race went green, and the top six cars created a gap over the rest of the field, battling in their own group for position. The first two Pro entries pulled away, and Heylen found himself in a four-way battle for third position with Farnbacher and two other Pro entries. Farnbacher went side by side with one of the Pro Lamborghinis, sending both cars off circuit temporarily. He rejoined side by side with Heylen, who found himself in an even closer position to fight for the lead. He positioned himself on the outside of turn eleven, making the pass on the Acura, and took the Pro/Am class lead with one hour, 13 minutes remaining.

Heylen seized advantage of the opportunity, and sailed through the turns, taking the class lead. The 10-minute window for the mandatory pit stop opened 25 minutes later, and he brought the Porsche in the pits at the completion of his stint. With fresh tires and a load of fuel, Luck jumped in, leading the No. 94 Acura, now driven by Ashton Harrison, 1.2 seconds behind. From there, Luck charged ahead, hitting his marks with each lap, keeping ahead of Harrison. He crossed the finish line with a one-second gap, earning his second win in two days.

The team’s double win places them and the drivers firmly in the lead for the 2022 championship, which resumes next month at Ozarks International Raceway, May 20-22.

Charlie Luck // No. 45 Porsche 911 GT3 R
What a weekend. Coming into this first race with Jan, I felt a lot of pressure. The first weekend with pit stops, that’s a huge deal, much bigger than I thought and all of it went really well. I got super coaching from Jan on all the details of a great pit stop. The number one thing on track was my concentration, which was really strong. Thanks to the whole Wright team for the incredible setup. What the heck! Two wins at Sonoma? We love it.

Jan Heylen // No. 45 Porsche 911 GT3 R
Just an unbelievable weekend. We knew coming into this race, going off of past seasons, that this is not our strongest track – it doesn’t suit the car as well. I wouldn’t say a surprise to come away with two wins because of the total teamwork and we executed well, but these was two big wins for the team toward the championship. I know there are tracks coming our way that suit the car a lot better. Two crazy drives by Charlie. First time doing all the pit stops and the pace was extreme.

GT America powered by AWS
Hutton McKenna made his own debut in the GT America series on Saturday, starting sixth in the No. 30 Porsche 718 Cayman GT4 RS Clubsport. He had a strong debut, making his way up as high as third place before the checkered flag, but ultimately finished the race in sixth.

He started race two from fifth place with a renewed vigor to climb up to the front of the field. While race two had only a brief window of green flag racing at the start before a full course caution halted the action, McKenna jumped from his fifth-place starting position to restart from second-place. As the field went back to green, he drove down the side of the No. 39 Mercedes of Chris Cagnazzi to take the class lead, earning his first win with Wright Motorsports. The GT America championship will resume at Ozarks International Raceway, May 20-22, in support of GT World Challenge America.

Hutton McKenna // No. 30 Porsche 718 Cayman GT4 RS Clubsport
That was awesome today! My first win with Wright Motorsports feels great. Thank you to the team. They did a fantastic job and gave me a great car. It was helpful to have them on my side and step up to this new series with their guidance. I’m really liking the GT4 racing here, and I love SRO America. Thanks to Bobby Viglione for everything.