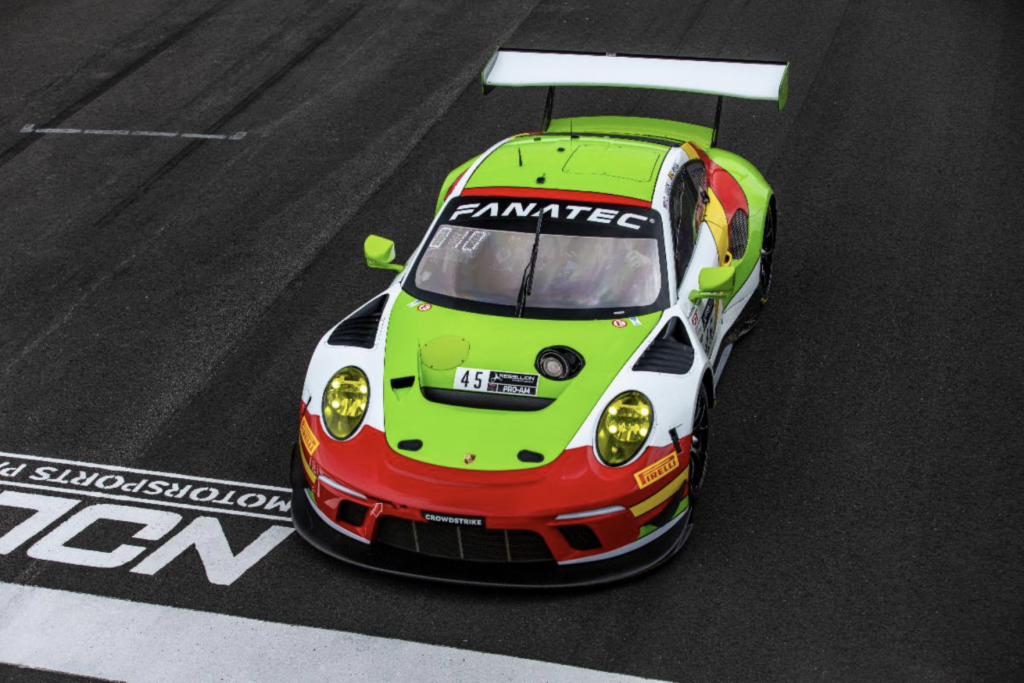 AVONDALE, La. (May 22, 2022) – Wright Motorsports had high hopes heading into the Fanatec GT World Challenge powered by AWS weekend at NOLA Motorsports Park, entering the weekend as points leaders in the Pro/Am class. Drivers Charlie Luck (Am) and Jan Heylen (Pro) had strong momentum on their side after winning back-to-back races last month at Sonoma Raceway, but attrition plagued the team in New Orleans, resulting in a challenging weekend.

“Racing is never easy, but some weekends are harder than others,” said team owner John Wright. “With incredibly humid and hot weather, everyone on our team really had to put in the extra effort. We had a great comeback in race two after a tough race one, and we were able to accumulate some additional points for the championship.”

Charlie Luck and the No. 45 Wright Motorsports Porsche 911 GT3 R took the green flag for race one from fifth place in the Pro/Am class. The fight between Luck and the other amateur drivers produced just as much heat as the atmosphere and contact with another car left the No. 45 Porsche stopped on track. Able to restart the machine, Luck continued, but the Porsche showed enough damage to the front end that the car had to go back to the garage for repairs. Though the team lost all hope of winning the race, the championship points battle was on everyone’s minds, knowing the title could very well come down to just a few points at the end of the year. Luck rejoined 13 laps down, and completed his stint with no further issues.

He pitted during the mandatory ten-minute window, bringing the No. 45 Porsche 911 GT3 R in for fuel, new tires, and a new driver. Jan Heylen took over for the final 45 minutes, and had an uneventful drive to the checkered flag, staying out of the way of his competitors, just looking to score points for a 10th place finish at NOLA Motorsports Park.

Due to the incident from the day before, the No. 45 Porsche was forced to start from the rear of the 17-car field. Heylen took the green flag surrounded by competitors in the Am and Pro/Am classes. He produced a strong launch on Sunday afternoon, climbing up to 12th overall in his opening laps. His pass on the No.91 Lamborghini of Corey Lewis brought him into the top-ten overall, and sixth in class, running the fastest laps of his competitors. He pitted from sixth, handing the Porsche over to Luck during the 10-minute window for the mandatory stop. Luck joined the race with 30 minutes left on the race clock, and immediately put himself in a six-car battle for third place in the Pro/Am class. Luck and his competitors flowed through the course, and as Ziad Ghandour in the No. 9 Lamborghini and George Kurtz in the No. 04 Mercedes battled side-by-side in turn 13, Luck took advantage of the situation and saw his opportunity to pass the pair to take fourth place. As he completed the pass, Luck was the victim of contact from the Mercedes, sending the Wright Porsche off course. He was able to continue and earn a sixth-place finish in the Pro/Am class.

The GT World Challenge America series races next in Danville, Virginia for rounds five and six of the championship, June 17-19. For more information, visit wrightmotorsports.com.

Charlie Luck // No. 45 Porsche 911 GT3 R
We had one heck of a come from behind in race two. Jan started absolute dead last and went all the way to sixth in his stint and then I took over and went to third in class before George Kurtz spun me out. There are some days when you drive and give it everything you’ve got, and you don’t finish exactly where you want, and this is one of those days. Then there are some days when it’s not quite as hard. We did all we could, and Wright Motorsports did a tremendous job repairing Saturday’s damage to be ready for today.

Jan Heylen // No. 45 Porsche 911 GT3 R
This was not the best weekend. Today was a good recovery from where we were yesterday. A good weekend in terms of learning and Charlie’s learning curve – that’s what we’re here for. We’re going to go to the next race having learned from the little mistakes we made here and get better. I’m sure that the next couple of races coming up are going to be better suited for us and the car, and I’m looking forward to that. Good job by the whole team, it was a tough weekend and they all put in a few extra hours this weekend.