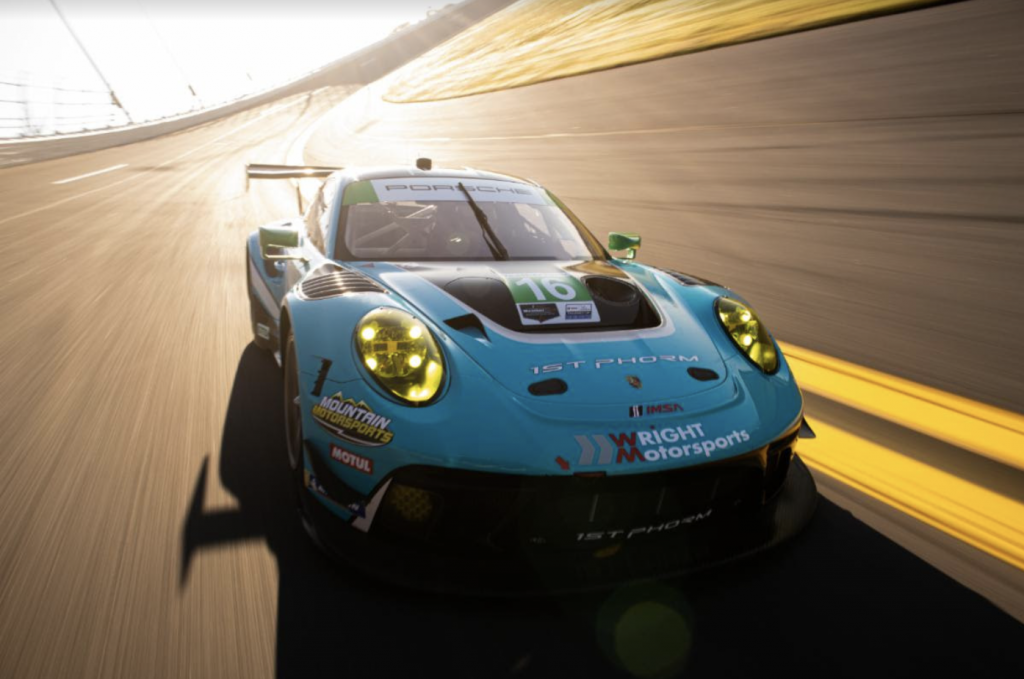 With two consecutive fourth-place finishes at the Rolex 24, the No. 16 Porsche not only will be racing strong to land a spot on the podium but secure the GTD-class victory as well. In last week’s three-day test at the Roar Before the 24, the program continually ran at the top of the charts, closing out the event as the second-fastest GTD car. The 2021 IMSA WeatherTech SportsCar Championship Michelin Endurance Cup champions have proven to be strong competitors in endurance racing, able to run up front and mistake-free over extended periods of time.

“We had a very strong Roar Before the 24,” said Team Owner John Wright. “The drivers all got up to speed quickly, the crew hit their marks, and the Porsche showed its strength and reliability as always. With the size of this year’s field, we’ll take great care in keeping the car clean and in a safe but strong position. With our lineup, we have a strong shot to be there to fight in the final hour.”

Following the Roar Before the 24, the team has set up camp at Daytona International Speedway, meticulously taking apart and rebuilding the Porsche 911 GT3 R in anticipation of the long week ahead.

The Roar Before the 24 provided competitors with varying weather conditions, in preparation for what is always an unpredictable race in Daytona, Florida in January. Current weather predictions promise rain for each day leading up to the race, and a low of 33 degrees on Saturday night for the race. With the largest field in recent years, clear weather conditions on race day will be a welcome gift for the competitors hoping to steer clear of contact throughout the entirety of the event.

IMSA Radio’s comprehensive coverage will begin with the first practice session and run throughout race week. A full event schedule can be found on IMSA’s Rolex 24 event page. The start of the race will air live on Saturday, January 29th, beginning at 1:30 pm Eastern on NBC, and select hours will then air on USA. Flag-to-flag coverage will be found on Peacock the new streaming service for NBC Universal. As usual, the team will offer live coverage on Facebook, Twitter, and Instagram, and all tune-in information is available on wrightmotorsports.com and imsa.com.

Ryan Hardwick
What a week at the Roar. Super successful weekend for our team. We advanced with the car throughout each session. The car just kept getting better and better and was at its best in the qualifying race. I was able to make up a couple of positions and felt really good. Got the car in to Jan very cleanly and he went to work. He was amazing. We are really excited about the car we have for the 24. We really look to being competitive for the GTD class win. If Lady Luck and all the stars align, maybe be in the hunt for a Rolex next week.

Jan Heylen
We had a super-fun qualifying race. A good job by Ryan. We all need a bit of time in the car. We didn’t have the opportunity to do a lot of off-season testing because of how late the 2021 season ended, so this race was good to get some laps in and fall into a rhythm. Ryan did a really good first stint and from there it was a fun race. There was a lot of good racing. I think we have a good car for next weekend.

Zacharie Robichon
It has been a great first experience with the Wright Motorsports team. We showed all four drivers are working well together. We have a good starting position. It is good to be working together, hitting all our marks, and being where we want to be. It is a long race but I am excited to get started.

Richard Lietz
We had a positive weekend. The main goal was to build up confidence, find the car balance for day conditions, night conditions, also if it rains the car is able to handle the rain tires and every driver is happy. I think we achieved our goal. We are quite well prepared. It was good for me so that I could see how the race is going to be: listening to the engineers and the spotters and getting used to the championship. Now we will try and relax a bit and get ready for the big one.