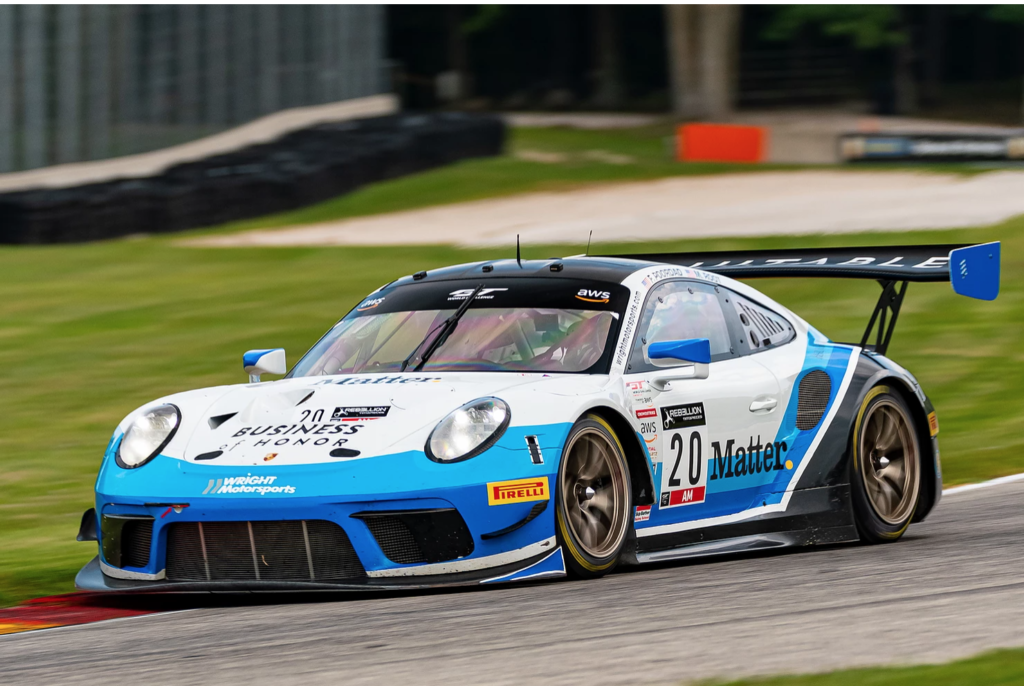 INDIANAPOLIS, Ind., (September 30, 2020) – Wright Motorsports will close out one of their three 2020 sports car racing championships this weekend at the Racing Capital of the World, Indianapolis Motor Speedway. The final two rounds of the 2020 GT World Challenge America powered by AWS will run on track in the join the Intercontinental GT Challenge Powered by Pirelli Indianapolis 8 Hour. Wright Motorsports has confirmed entry with the No. 20 driven by Full season GT World Challenge drivers Fred Poordad and Max Root will be joined by Jan Heylen in the No. 20 Porsche 911 GT3 R.

“As a team, we’re obviously no stranger to endurance racing, but we’re excited for our SRO program to get to take part and finish the year with an eight-hour race,” said Team Owner John Wright. “Fred and Max have had such a great run all season, and we hope them and Jan cap it off with a strong finish.”

Poordad and Root have had an impressive rookie season in the GT World Challenge America series, where they started the 2020 season off with two class wins in the opening rounds at Circuit of the Americas. In the six rounds that followed, the pair earned three overall podiums and four more class wins on many on North America’s top road courses. Heylen subbed in for Max Root for the two rounds at Circuit of the Americas, where he and Poordad swept the class wins and earned one overall podium. Root and Poordad dominated the Am Cup class, leading by 100 points heading into the Indianapolis season finale.

Root missed the two Circuit of the Americas rounds to participate in his first 24 Hours of Le Mans, where he and co-drivers Richard Heistand and Jan Magnussen earned a strong sixth-place finish. Following Root’s impressive Le Mans debut, the No. 20 Porsche 911 GT3 R has moved up to the silver class for this weekend’s festivities.

The GT World Challenge America competitors will accumulate their final 2020 championship points in the first three hours of Sunday’s eight-hour endurance race. Intercontinental GT Challenge Powered by Pirelli race will run on Sunday, October 3 from 10:00AM to 6:00PM Eastern, and will air live on CBS Sports Network.

We are thrilled to be going to Indianapolis with a large field of world-class competitors. Max and I will be joined by Jan Heylen for our final race this season, and we are excited to be able to represent Wright Motorsports in what should prove to be a great race.

I’m very happy to be returning with Wright Motorsports for our season finale. I unfortunately missed the last round at Circuit of the Americas because of Le Mans, and I’m very happy the event went so well. I’m glad to be returning with Fred and Jan. Indianapolis Motor Speedway is a new track for me, so I’m glad the team has tested here previously and has data from that. We hope to show up strong on Friday, have a good strategy, and try to go for an overall podium in the Indianapolis 8 Hour.

It’s nice to have Max back with the team. I hope we can carry the momentum from Austin into this weekend with another podium finish and good points for Fred and Max towards their championship. I love long-distance races in general, so I’m really looking forward to getting started. I hear the competition will be strong with factory efforts and drivers from across the globe: all ingredients for an exciting race and a good challenge for Wright Motorsports.