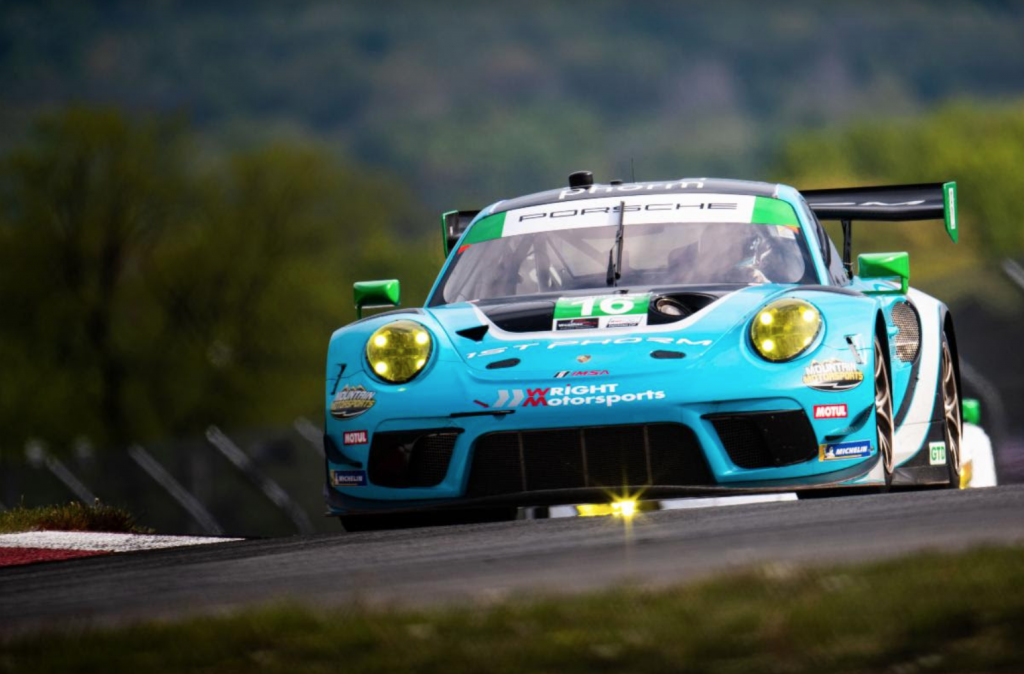 BATAVIA, Ohio. (June 22, 2021) – After a rare weekend of no racing, Wright Motorsports is back in action this weekend at Watkins Glen International for an action-packed event. The Ohio-based Porsche customer racing team will field five entries across the IMSA WeatherTech SportsCar Championship, Michelin Pilot Challenge, and Porsche Carrera Cup North America Presented by the Cayman Islands.

IMSA WEATHERTECH SPORTSCAR CHAMPIONSHIP
Headlining the weekend’s festivities, the Sahlen’s Six Hours of the Glen will feature 40 entries from five classes. The No. 16 Porsche 911 GT3 R with drivers Patrick Long, Trent Hindman, and Jan Heylen will compete against 13 other entries in the GTD class. Over the course of the race, pit stop strategy, the speed of driver changes, and performance on track will be crucial keys to ultimate success. The six-hour event is the third of four endurance races in the full season calendar, known as the Michelin Endurance Cup (MEC). Wright Motorsports currently sits second in the MEC, following strong performances at the Rolex 24 At Daytona and the Twelve Hours of Sebring. The team also stands third in the full season point standings and looks to be a strong contender this weekend. Last season, the team never finished outside the top four in each of the four MEC race events.

As announced last week, the full-season lineup has undergone changes, with Ryan Hardwick stepping out of the GTD program to fully focus on his Michelin Pilot Challenge efforts. This weekend will mark Trent Hindman’s third race with the team, and his first as the full-time driver for the remainder of the season alongside Porsche Factory driver Patrick Long.

The field will take the green flag on Sunday, June 27 at 10:30 AM Eastern, and the race will air live on NBC Sports Gold’s TRACKPASS, and tape delayed on NBCSN at 7:00 PM ET. IMSA Radio will also offer their comprehensive commentary live, and fans outside the US can check IMSA’s international coverage for their listings by country. Live timing of all the sessions will be available on livescoring.us.

Patrick Long
No. 16 Wright Motorsports Porsche 911 GT3 R
Watkins Glen is such an iconic track with a storied past on a world level. What doesn’t come through by watching it on TV is just how fast of a track it is. The stakes are high here and it is super rewarding when the car is tuned right and the driver is on song. But it is also one of the most difficult tracks I have ever been to in my career.

I really like the six-hour format. It blends the best of both worlds, of sprint and endurance. It will be a hard push from the start but with a few more pit stops and more strategic choices, it adds to the spectacle. Having Trent [Hindman] on board for the remainder of the season is really rewarding. He is a star in the making. It is fun to go racing like this, with friends like Johnny Wright, Ryan Hardwick, Jan Heylen, and Trent. Working with people you are really inspired by is special.

It’s our first time back to Watkins Glen since 2019. The time spent away from this racetrack should pose a strong challenge to all teams upon returning this week. Fortunately, the excellent preparation by the Wright Motorsports team gives us confidence that we’ll be in the fight for the win.

Jan Heylen
No. 16 Wright Motorsports Porsche 911 GT3 R
We had a good test a few weeks ago and the team is really well prepared. There’s been a driver change, which was Ryan’s decision, but I know I’ll miss him in the car. He’s the reason we’re there and Ryan’s the guy that put the program together, so not to have him in the car is definitely going feel a little weird and take some time to get used to. We owe a big thank you to Ryan and 1st Phorm for all of their support, We have Trent, who will step in for Ryan and do a great job. It’ll be great to have him back. This may not be our strongest track, but with the driver lineup we have, we’ll come away with some good points and keep our eye on the championship. We’re excited to be here and it will be a busy weekend for all of us.

MICHELIN PILOT CHALLENGE
With two podium finishes in three races, the No. 16 Porsche 718 Cayman GT4 Clubsport is also on the hunt to get closer to the GS class lead in the Michelin Pilot Challenge. Driven by Ryan Hardwick and Jan Heylen, the No. 16 1st Phorm Porsche has started both races from pole position. Despite missing the first race of the season, Wright Motorsports will be a strong contender for the 2021 championship title as the season progresses.

The Tioga Downs Casino Resort 240 will run for four hours, the longest race length of the season. Thirty-eight cars from ten different manufacturers will compete on Saturday, June 26 starting at 2:35 PM. The race will air live on NBC Sports Gold’s TRACKPASS and tape-delayed on Wednesday, June 30 from 5:00 PM to 7:00 PM Eastern.

Ryan Hardwick
No. 16 Porsche 718 Cayman GT4 Clubsport
I’m so excited for these back-to-back race weekends at Watkins Glen. It will be nice to have my complete focus on the Michelin Pilot Challenge series and our Cayman GT4. Switching back and forth between the GTD and the GT4 cars was really challenging for me, and that played a lot into my decision to focus on one car for the remainder of this season. The Glen is my favorite racetrack on the IMSA schedule! It’s so challenging to run at a quick pace here for an entire race. Our focus is to run a couple of clean races, gain some positive points and keep chipping away at the overall championship lead.

I’m also excited to welcome Trent back to our team for the rest of the WeatherTech Championship season. I expect our GTD program to pick up right where we left off the last time Patrick, Trent and Jan were all in the car together at Sebring. The GTD class is probably more competitive now than ever before, and I’m confident that we’ve put together one of the best teams in the paddock. It’s going to be a fun and exciting remainder of the season!

Jan Heylen
No. 16 Porsche 718 Cayman GT4 Clubsport
I’m excited to go back to the Glen with Ryan. We’ve come off two really good weekends in the GT4 car. We’re back into the championship. We need another good result to put us in the top three, and to really fight for the championship. I think the Glen could be a tough race for us depending on how hot it’s going to be. We have a really good car, but we know that we lose some performance when it gets hot, so hopefully, the weather works with us a little bit and especially since, since we have a doubleheader there. Ryan is in great form, and our testing went really well. Ryan was quick and we’re really looking forward to it and I hope we can come home with another podium finish.

PORSCHE CARRERA CUP NORTH AMERICA PRESENTED BY THE CAYMAN ISLANDS
It has been almost two months since the Porsche Carrera Cup North America raced rounds three and four of the championship at Circuit of the Americas, and Wright Motorsports is ready to get back to racing with their trio of Porsche race cars. After bad luck and poor weather conditions in the first two doubleheaders of the season, drivers Max Root, Hutton McKenna, and John Goetz are hoping for a clean event, eager to pick up some solid results and points in the weekend’s pair of 45-minute races.

John Goetz
No. 57 Porsche GT3 Cup
I’m looking forward to another fine event with PMNA at one of my favorite tracks—Watkins Glen. All the high-speed corners with the new 992 Cup’s excellent downforce will make for a wonderful experience.

Max Root
Moorespeed-Wright Motorsports No. 7 Porsche GT3 Cup
I’m looking forward to getting back to Watkins Glen International. It’s a really special place with a lot of historical value. This weekend, we’re sporting a retro livery, thanks to our sponsors EvaClean, Matter, and Isringhausen. We’re going to be coming out swinging strong. We’ve had some tough luck this first half of the season. We’re not going to let it stop us and we’ll give it everything we have.