Wright Motorsports Secures Podium, Closes in on Championship Battle in the Rain

Wright Motorsports Secures Podium, Closes in on Championship Battle in the Rain 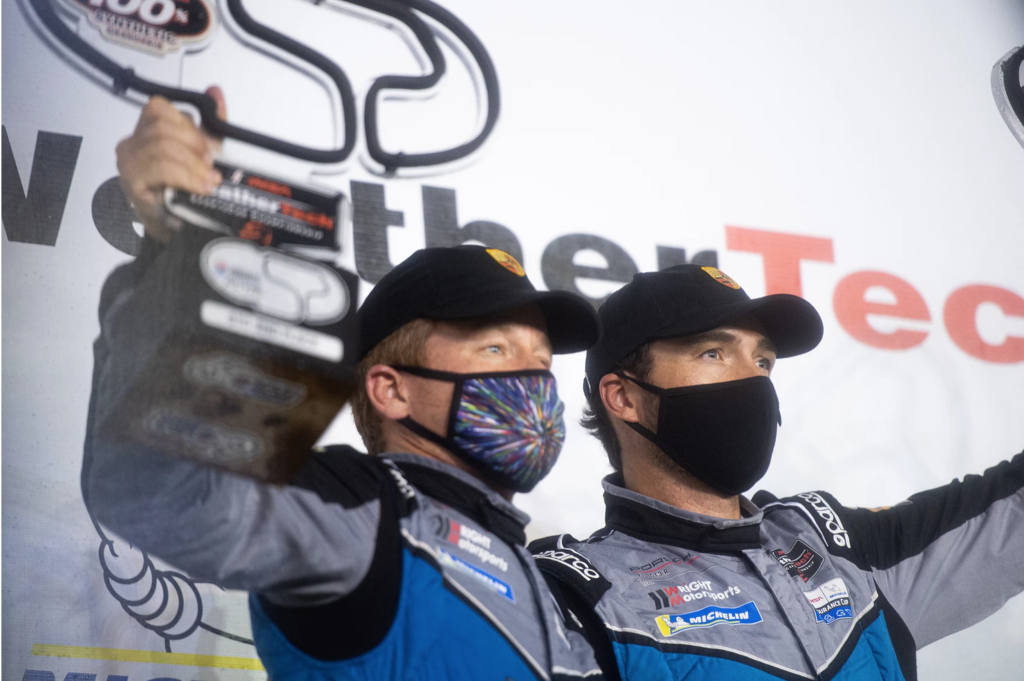 CHARLOTTE, N.C., (October 10, 2020) – The points battle for the IMSA WeatherTech SportsCar Championship GTD class title took an interesting turn Saturday evening at Charlotte Motor Speedway. The No. 16 Wright Motorsports 1st Phorm Porsche 911 GT3R produced a memorable performance in the rain to finish second, well enough ahead of the team’s championship contenders to close the gap and climb to stand within four points of the current leaders

“I’ve said all season that our consistency in strong execution is what will keep us in the fight,” said Team Owner John Wright. “Everyone’s performance at Charlotte is the living example of that. The drivers did an incredible job keeping the car on track in terrible conditions, the crew made up more time in the pits, and we took advantage of the hardship of our competitors. This championship is going to be an intense battle to the finish, and we’re ready.”

Driver Ryan Hardwick qualified the No. 16 1st Phorm Porsche on Saturday afternoon, putting forth one of his best qualifying sessions to date. Hours before the Motul 100% Synthetic Grand Prix green flag, torrential downpour saturated the track, producing streams and standing water all over the ROVAL circuit.

The rain never ceased and continued to descend on the track as the field took the green flag Saturday evening. As the 18-car field increased speed at the conclusion of the final pace lap, the spray made the visibility next to nothing. As other cars slipped and hydroplaned across the track as the race began, Hardwick stayed cool and in control, climbing a spot to take fourth in the opening laps. Conditions worsened before they got better, sending more cars off course, but Hardwick maintained speed and control, staying in the top six as he battled for position in the falling rain and slick conditions.

A series of caution periods came out before the Am drivers were able to reach the minimum drive time, leading to the required driver change pit stops to happen under green. Hardwick pitted in fifth position, and Patrick Long took over the driving duties for the remainder of the 100-minute race. Pit stop perfection from the Wright Motorsports crew launched Long into the race with no pressure ahead or behind, allowing him to make up time as other GTD competitors pitted a lap or two later. Delays in the AIM VASSER SULLIVAN pits played into the hands of the No. 16 Porsche, with Wright gaining three spots by the time all driver changes were complete.

The battle for the second-stint drivers in GTD started with an 11-second gap between the 86 Acura of Mario Farnbacher and Patrick Long. The rain appeared to lighten, and the standing water around the circuit receded, and the Porsche came alive. With every lap, the Porsche closed in on the Acura by a full second, cutting the gap down to five seconds. The No. 96 BMW of Bill Auberlen was also enjoying a strong run and passed both the No. 16 and No. 86 cars to take the class lead.

Long snatched second place from the No. 86 of Farnbacher, who later received a stop-and-go penalty for cutting the course. The No. 86 Acura resumed to join the fight, coming in behind the No. 14 Lexus of Jack Hawksworth, one of the leading championship contenders. The Porsche, Acura, and Lexus engaged in a tight three-way battle for second place as the BMW had over 20 seconds over everyone. A full course caution closed the gap, and a four-way fight for the race lead and the championship resumed. As Long in the Porsche continued to focus forward on fighting for the lead, Hawksworth and Farnbacher had contact, sending the Acura spinning, and forcing the Lexus to serve a drive-through penalty.

It was then that Patrick Long set his fastest laps of the race, taking the white flag, then the checker flag in second place. The strong finish, combined with the trouble of their competitors, moved both the Wright Motorsports drivers and the team up to second in their respective championships. With 196 points, Hardwick and Long are tied with AIM’s Aaron Telitz, just four points shy of the duo of Mario Farnbacher and Matt McMurry. In the team championships, Meyer Shank Racing holds a four-point lead, with Wright Motorsports coming up in second with strong momentum.

Just three races remain in the 2020 IMSA WeatherTech SportsCar Championship, two of which are endurance races—Wright’s specialty. The team heads straight from Concord, North Carolina to Braselton, Georgia for Petit Le Mans. Michelin Raceway Road Atlanta will host Petit, a 10-hour endurance race where the team will again be joined by Jan Heylen as the team’s third driver. The race will begin Saturday, October 16 at 12:40PM and air live on in its entirety on NBC Sports Gold’s TRACKPASS, or on NBC Sports Network in parts from 12:30PM to 6:30PM and 9:30PM to 11:00PM Eastern.

Wright Motorsports will also be running two entries in the Porsche GT3 Cup Challenge USA by Yokohama, the No. 45 of Charlie Luck and the No. 92 of Joseph Lombardo. The event will host the second triple-header of the year, with two races taking place on Friday, October 15, followed by the final race on Saturday, October 16. All races will air live imsa.tv. For full schedule information, visit imsa.com.

That was quite possibly the most difficult race I’ve ever competed in! The Charlotte Roval presents enough challenges itself to the teams and drivers as far as combining all the different track surfaces, the extreme banking, and the concrete walls everywhere. Then you throw in the added difficulty of limited visibility from the darkness of night, as well as an absolute downpour of rain from a tropical depression that lasted the entire race! I think every driver and team would agree that this event was one we will all remember for a long time. Our Wright Motorsports guys gave Pat and I a great car to drive, and we absolutely nailed the single pit stop of the race, gaining four positions in the process! Momentum is a great thing to have in any situation, and in racing, it’s very hard to beat. Right now, the momentum is definitely on our side, and it couldn’t be happening at a more important time with only three races to go in the season. We are all extremely focused on taking this championship fight right down to the very last lap of the season at Sebring. I’m looking also forward to heading back to my hometown track for the Petit LeMans next weekend and keeping this momentum rolling!

That was an unbelievable race. Ovals at night in the rain are a trifecta of things that challenge drivers in many aspects. Ryan did a great job keeping his composure, turning a clean car over to us. We made a lot of time up in our pit stops. We got into the groove and tried to manage tire pressures. It was hard to battle Mario and Jack. Then on the restart, we had a chance with Bill, who was the car to beat this evening. It was great points day for us an unbelievable effort by the team to have us up there fighting for the victory at the end.