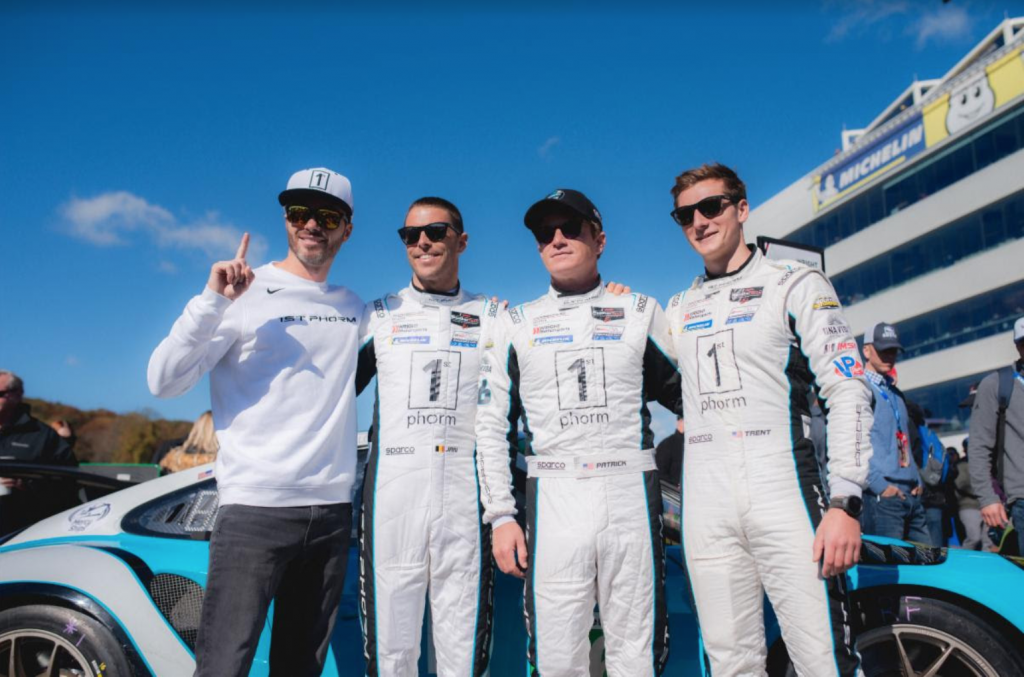 “What a weekend for our team,” said Team Owner John Wright. “In Michelin Pilot Challenge, we celebrated two titles, and then today in WeatherTech, we earned two more. I’m immensely proud of everyone on this team. An incident in the second practice really threw a wrench into our weekend, and an early race incident pushed us two laps down, but we climbed our way back to lead when we needed to lead and put in a really strong race. Incredible effort by everyone here.”

Petit Le Mans offered no smooth sailing for the Porsche customer racing team’s IMSA WeatherTech SportsCar Championship program. During the second practice session, Heylen’s first laps of the weekend were cut short after the No. 16 Porsche 911 GT3 R was tagged by a faster LMP2 car exiting turn eleven at Road Atlanta. The contact sent Heylen and the Porsche into the wall, causing catastrophic damage. Fortunately, Heylen was unhurt and would go on to win the Michelin Pilot Challenge GS class race and championship for the team on Friday. After the team assessed the GTD class car and considered all options, two truck drivers were flown privately to Cincinnati and drove to the team’s Batavia, Ohio shop location. They trucked a spare Porsche 911 GT3 R to Braselton, Georgia, and at 7:00 am the following day, the dedicated group of men and women that make up the Wright Motorsports crew got to work to build up the new arrival. Though no small feat, the team had the car prepared just in time, and Trent Hindman qualified the car, setting an impressive seventh-place starting position for Saturday’s race.

A post-qualifying change ahead in the grid moved the No. 16 Porsche to start from sixth place, and though the field had a clean start in the opening turns, tight pack racing led to the Wright car suffering contact and limping around the circuit with a flat right-rear tire early on. Hindman painstakingly kept the car slow through the turns, trying to keep the car free of any additional damage. He at last pitted, and the team inspected the car, took care of any loose bodywork, and sent him out of pit lane with a fresh Michelin tire.

The team ultimately lost two laps in pit lane, due to repairs and extra stops, but masterfully used a series of cautions to take advantage of the series pass-around procedure that allows for lapped cars to circle around the pace car and gain a lap back. The team would also stay out while the field pitted and instead pit shortly later, gaining additional track time that would be beneficial in pit lane as the team double and triple-checked the potential damage to the Porsche. A series of back-to-back yellows not only allowed the car to get back on the lead lap, but catch up to the field, and by then, Hindman was ready for the restart. As the field went back to green, he immediately passed the Nos. 42 and 44 cars of Don Yount and John Potter, to climb from 13th to 15th. After passing the No. 88 Porsche of Rob Ferriol, trouble for four more cars played into Wright’s hands, bringing Hindman up to eighth position with only two hours complete. Five cars dropped into pit lane just before a full-course caution, catapulting Hindman up to third, but he later came in for a scheduled stop, and Patrick Long took over just before the three-hour mark.

The veteran Porsche factory driver rejoined in eleventh with just under three hours complete. He ran a relatively quiet stint, patiently riding his way through cautions. Knowing the strategy was to lead at the four-hour mark in order to obtain Michelin Endurance Cup points when a caution came just seven minutes before the first segment, Wright Motorsport stayed on track while the majority of the GTD field pitted for full-service stops, again rocketing the team to first-place. Just 15 minutes later, a massive, multi-car crash occurred on the restart as the field headed into turn one, creating another lengthy caution. After accruing the four-hour points, Long pitted the Porsche from first for a safety check and rejoined to restart the race in fifth. He quickly made the pass on the No. 12 of Robert Megennis to take fourth and shortly after pitted for Heylen to take over.

Hindman jumped in at sunset, and again the field endured several more full-course caution periods. The Porsche ran in fourth-place with steady lap times and made a longer pit stop to make an adjustment to the rear wing, giving the car a setup change to fight in the night hours. At the eight-hour mark, the team again kept the No. 16 Porsche on track while the rest of the field pitted, and Trent Hindman again led the field and acquired points for the Endurance Championship.

Hindman closed out his stint in first, and Heylen rejoined to run to the checkered flag. At this point, the Endurance Cup championship was almost locked in, provided the team finished the race. Heylen brought the Porsche 911 GT3 R across the finish line in fifth place, the team’s seventh top-five finish of the season in the GTD class.

“I’d like to thank everyone that made this season possible,” concluded Wright. “Porsche Motorsport North America is unbeatable, and we’re so proud to be with the manufacturer that won both GTD titles. We also owe a big thank you to Ryan Hardwick, and our partners in 1st Phorm, Mountain Motorsports, and Una Vida Tequila. We’re very proud to celebrate this championship with them, and I’m glad we were able to end Pat’s full-time driving career with a championship win.”

Today was a measure of teamwork. We went to work on the strategy. We easily did the most pit stops of any team today with an eye on a prize and goal [the Michelin Endurance Cup]. It wasn’t the overall championship but the next best thing. I am so proud that Porsche took both titles in GTD. This is a great way to cap off a full-time driving career. I am going to enjoy tonight.

That was more than just an eventful day. That was an eventful weekend and an eventful season. There were a lot of challenges this year and it did nothing but fight through them and make it happen. A massive thanks to everybody at Wright Motorsports for making the entire year possible. We fought through some hard times and still came away with some hardware. It is a pleasure working with these guys and I am grateful to be a part of this team.

We won a bunch of championships this year, two this weekend. Given what happened at the beginning of the race, this is more than we thought we were going to do. To come back and play the strategy just right, to come away with the endurance championship is really amazing. It has been an amazing season and I hope we can do it again next year.