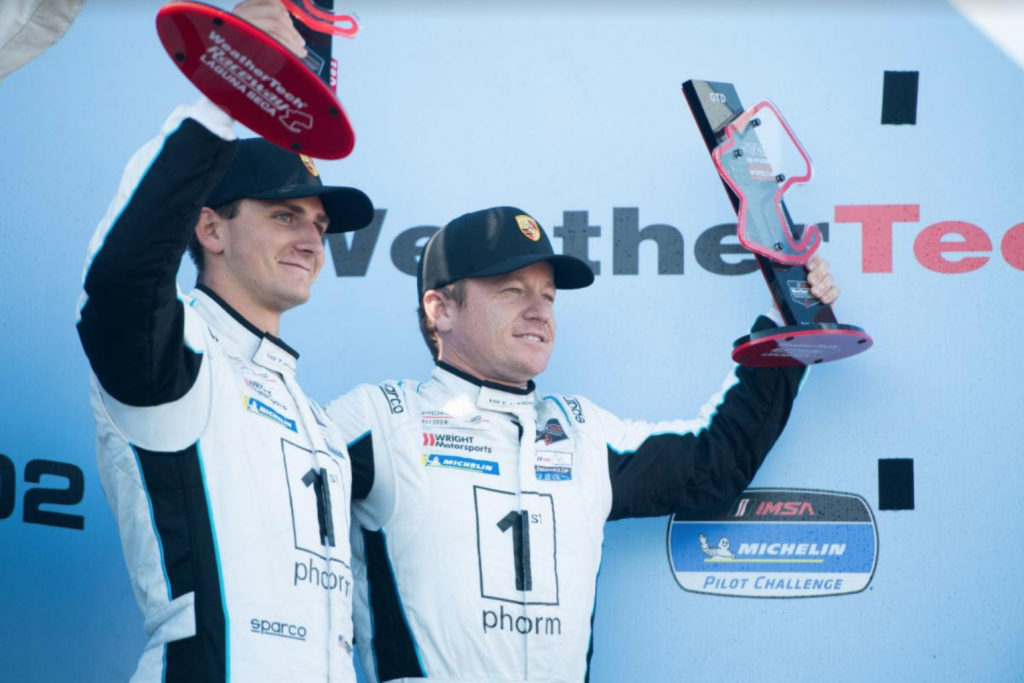 MONTEREY, Calif., (September 12, 2021) – Wright Motorsports put forth an impressive performance this weekend at WeatherTech Raceway Laguna Seca, securing two pole positions, one win, and one third-place result between its two IMSA programs. Jan Heylen, Max Root, and the crew of the No. 16 Porsche 718 Cayman GT4 Clubsport won from pole position on Saturday in the Michelin Pilot Challenge, intensifying the fight for the GS points championship battle. In the WeatherTech SportsCar Championship, Patrick Long and Trent Hindman secured a third-place finish from pole position, putting up a strong fight to the end for maximum points. In Indianapolis, the team’s Porsche Carrera Cup North America Presented by the Cayman Islands secured three additional top-five finishes, bringing the 2021 tally to twelve in five races.

“From our Porsche Carrera Cup North America program in Indianapolis to our IMSA efforts in Monterey, it’s been a strong weekend for us,” said team owner John Wright. “We’ve shown no matter the series, we can competitively and consistently, and now we’re fully dialed into maximizing our results for the remainder of the season.”

IMSA WeatherTech SportsCar Championship
WeatherTech Raceway Laguna Seca
In another impressive qualifying session, Trent Hindman secured his first GTD pole position of 2021 setting the No. 16 Porsche 911 GT3 R from first on Sunday’s race. He held the position in the opening laps until the first and only full-course caution, but the BMW of Robby Foley took the top position after an early-race restart. Hindman stayed close and maintained position, assuming the lead when the BMW came in to pit lane for its first stop and driver change to Bill Auberlen. Hindman gained as much time as he could with the clear track, building a 1.1-second lead before pitting for Patrick Long to take over with a new set of tires and a full tank of fuel. A strong stop by the team sent the Porsche out in second place, with a seven-second gap to the leader. With the all-clear from the pit box, Long pushed hard gaining half of a second with each lap. Lurking in Long’s shadow, Laurens Vanthoor followed Long through the turns of the California course, eventually making the pass and taking the lead from Auberlen in the BMW.

Long wisely preserved his tires, knowing he’d need them for a strong late-race push. Long pitted for his final stop, rejoining just ahead of the BMW, but the warmer tires of the car behind allowed for a pass later in that lap. With one hour to go, Long ran fifth, again chasing Auberlen while also working to preserve the Porsche’s tires. In the final half-hour, his patience paid off, and he made the pass, pulling away from the BMW with ease. He charged forward in the last 20 minutes, quickly closing in on the No. 1 Lamborghini in second place, but ultimately crossed the line in third place.

With three races remaining, Wright Motorsports stands fifth in the GTD Team standings. Next, the championship heads to the streets of Long Beach, California for the Acura Grand Prix of Long Beach, September 26.

Patrick Long
It was a super-challenging race and a game of tire strategy. We tried two different things in each of our two final stints and really found a great balance at the end. Unfortunately, we ran out of time to catch the No. 1 car ahead, and we had to settle for third. Great job by the team. I wish I had a little more for them today, but we’ll keep our head down and keep these podiums coming until the end of the year and see where we shake out.

Trent Hindman
Obviously, we really wanted to convert qualifying to the same result in the race today. We just, unfortunately, came up a little short, and that’s okay. It was still a beautifully executed race by the Wright Motorsports guys. A big thanks to 1st Phorm, Mountain Motorsports, and Ryan Hardwick for all their support and making this happen. We have a couple of really good key points that we’ll work on going into Long Beach and be as equally as racey there.

Michelin Pilot Challenge
WeatherTech Raceway Laguna Seca
After full-season driver Ryan Hardwick tested positive for COVID-19, the team called in Max Root, who was slated to run in the Porsche Carrera Cup North America Presented by the Cayman Islands triple header at Indianapolis Motor Speedway. In his second IMSA Michelin Pilot Challenge qualifying session of 2021, young Max Root duplicated his performance from Sebring, taking pole position by 0.5 seconds. In the No. 16 Porsche 718 Cayman GT4 Clubsport, He led the field to green on Saturday afternoon and immediately created a several-second gap over the field. The race stayed green for the entirety of Root’s stint, and he pitted under green for the mandatory driver change. After a tire swap and a fuel fill, Jan Heylen took over, joining the race with one hour, seventeen minutes to go. Heylen entered the race in second place, but made the mass on the leading No. 40 Mustang, working to create a gap over the Mercedes of Eric Foss.

Further back, Bill Auberlen in the Turner Motorsports BMW had his sights set on the front, and he pushed his way to the front. All thoughts were on championship points, as the top two in the GS team standings battled it out. Heylen held off Auberlen, as the BMW used up its tires looking for the opportunity to make the pass. At this point in the race, Wright was playing the race on fuel strategy, hoping to conserve enough to make it on one stop during the race. All that changed when the BMW pitted for a splash of fuel, which would allow them to be more aggressive on track against the rest of the field. After a lap or two of consideration, while Heylen tried to gain as much track position as possible, the strategists at Wright called Heylen in for a quick serving of fuel. Heylen rejoined just behind the BMW, closing any space between the two cars to put heavy pressure on Auberlen. With 30 minutes remaining, the BMW, after several occurrences of having two wheels off the track, suffered a flat tire, forcing the car to limp back to pit lane. Heylen reclaimed first place, and closely managed his gap over the field all the way to the checkered flag. On Saturday afternoon, Wright Motorsports earned its first Michelin Pilot Challenge win after four podiums so far this season. The victory closes the gap to the leaders to a mere 80 points, ensuring the team’s standing to fight for the championship with two races remaining.

VIRginia International Raceway will host round nine, the penultimate race of the 2021 Michelin Pilot Challenge, on October 8.

Jan Heylen
It was a super race for the whole team and a big thank you goes to Ryan for putting us out here even though he’s missing the race. I can’t say enough about his commitment to the program, and to pay him back with a win is just awesome. Max was our natural stand-in, and he did an awesome job like he did at Sebring. It’s great to have guys like Max on the program and to be able to give them a place when the opportunity comes. John Wright and Bobby Vigilone have put a lot of hard work into this program and it’s nice to see all the payoff. Max did a really good job qualifying on pole first, and then his first stint, he did great controlling the race. Then all hell broke loose as it became a fuel race. Bill Auberlen pitted, and that caught us by surprise. We ultimately decided to stop saving fuel and go on a similar strategy, which put us behind them when we came out of pit lane. At the time, l wasn’t too stoked about it, but that’s what made the race for us in the end by putting pressure on Bill and forcing the team into a mistake. We won the race and the BMW lost some valuable points. Today put us back in the championship and couldn’t have gone any better. We’re ready for Ryan to come back and finish the season strong.

Max Root
It was a really interesting race. It was pretty easy on my stint. I kept it clean and kept the car up front. I was on the edge of my seat for Jan’s entire stint. I’m happy to finish up in first for the team, for Ryan Hardwick, 1st Phorm, and everyone involved.

PORSCHE CARRERA CUP NORTH AMERICA Presented by The Cayman Islands
Indianapolis Motor Speedway
While luck was not on the side of Hutton McKenna in the triple header at Indianapolis Motor Speedway, the No. 88 Porsche 911 GT3 Cup car was able to secure three-top ten results, finishing as high as eighth in race one. John Goetz and the No. 57 Porsche 911 GT3 Cup car finished in the top five in all three races, narrowly missing a podium finish in race one. The strong weekend puts Goetz fourth in the Pro-Am point standings. The series next races at VIRginia International Raceway, October 8-10.