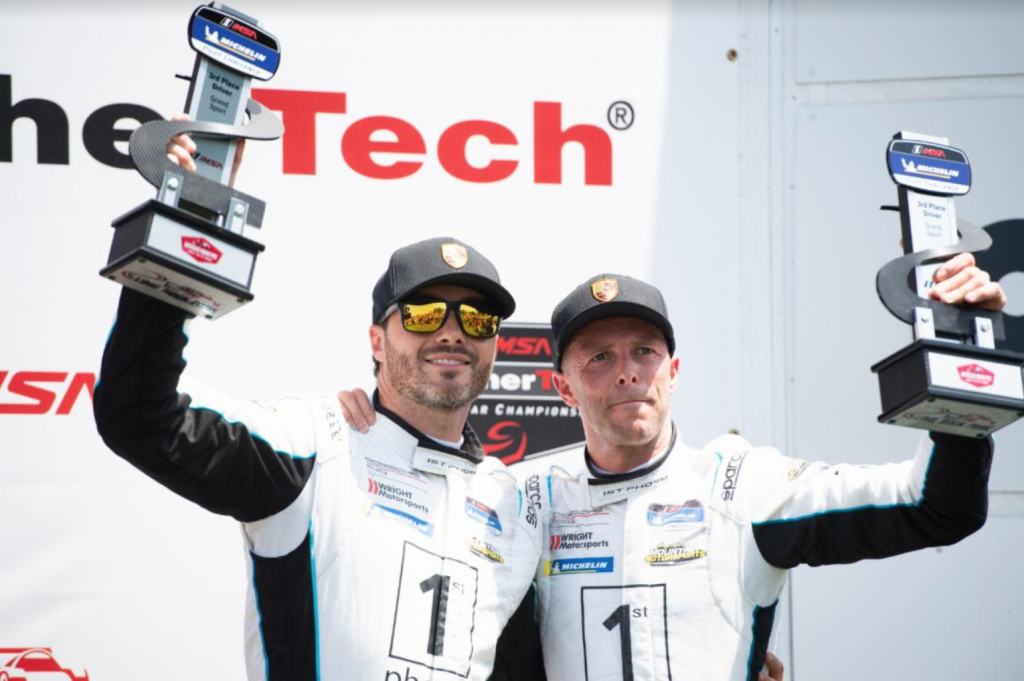 “It’s definitely disappointing that the red flag ate so much into the IMSA race,” said Team Owner John Wright. “However, I’m still proud of our team, on both programs. The WeatherTech guys had a strong car to finish that race, and the Michelin Pilot Challenge group had an awesome race to finish third and get that top spot in the championship standings. Great job all around.”

IMSA WEATHERTECH SPORTSCAR CHAMPIONSHIP
After a less than ideal qualifying session on Friday, the team put together a strong strategy to allow for the No. 16 Porsche 911 GT3 R to work its way up through the field. The entire GTD field drove into turn one after the green flag, resulting in the No. 16 getting shuffled back several positions. Avoiding any contact, driver Trent Hindman kept his head down as the field spread out. The Porsche came alive in Hindman’s second stint, and the young racer and was able to climb back up to eighth before a weather-related full-course caution. The clouds rolled in over Lime Rock Park, and with one hour, ten minutes remaining on the clock, the race was red-flagged for lightning in the area. The race did not resume, and with the eighth-place finish, Wright Motorsports unofficially maintains their fifth-place standing in the GTD class team points.

Patrick Long
Incidents aside, I’ve never had a race where I wasn’t able to get in. it’s unfortunate we didn’t get to run the final stint. We worked hard this week, and we were certainly hopeful that the final stint was going to come our way. I appreciate our partners and wish we could have put on a better show for our fans. Sometimes Mother Nature has another plan.

Trent Hindman
Big thanks to the Wright Motorsports crew. We showed a lot of speed in our Porsche 911 GT3 R this weekend. I’m not sure what happened in qualifying and our first stint. We need to investigate a little bit. Our first stint was dictated by a lack of pace in qualifying, and as soon as we got into the second stint in the race, the car just came alive. There are some things we can investigate and the silver lining is that we did everything correctly and in the right direction. Something outside of our control dictated our result today. We have lots of positives coming out Lime Rock and going into Road America.

MICHELIN PILOT CHALLENGE
After an incident in qualifying the No. 16 Porsche 718 Cayman GT4 Clubsport started the race from 21st position, but Hardwick had a strong opening start, passing several cars in the first laps of the race. A series of cautions and penalties also played into the team’s hands, and the car gained nine positions in the first ten minutes. He closed out his stint in eleventh, and true to team form, a fast and efficient pit stop with a fuel fill, driver change, and the addition of tires, brought Jan Heylen into the race in seventh position. Despite saving fuel, Heylen put in strong opening lap times as the Michelin tires came up to temperature. Racing three-wide at times, he climbed up to fourth as the field’s level of aggression increased each minute closer to the checkered flag. In the final 20 minutes, various cars had contact or went off course, while the No. 16 Porsche raced smartly for position, solidly holding a third-place result to the end of the race. The strong result brings the team to tie for first in the Michelin Pilot Challenge GS point championship.

Both series next head to the fan-favorite circuit of Road America, in Elkhart Lake, Wisconsin for the next pair of sprint races. On-track activities will begin Friday, August 6th, with Michelin Pilot Challenge’s race taking place on Saturday evening, followed by the IMSA WeatherTech headlining races on the afternoon of Sunday, August 8th. The team’s three-car Porsche Carrera Cup North America Presented by the Cayman Islands operation will also return to action for the one-make championship’s seventh and eighth rounds on the four-mile circuit. For more information, visit imsa.com.

Ryan Hardwick
What an unbelievable finish. I’ll remember this race for a long time. From dealing with the mistake I made yesterday to come from dead last all the way to third place was remarkable. It was one of the greatest races of my life, for sure. We owe it all to the team for getting the car prepared. It was great and brilliant to drive. Credit also goes to Jan Heylen. He put in a mega stint at the end to push us up to the podium. I feel fortunate for this finish, and to be leaving halfway through the season tied for the championship with the BMW. I’m super excited for Road America to see how the season finishes from here.

Jan Heylen
I was really looking forward to coming to Lime Rock Park. There are always good battles here. Starting from the back, it was going to be a tough race for us, but this is a fun place to come through the field. The team had really good strategy and Ryan Hardwick drove a good stint. He definitely did half of the work. We had good pace in practice in the long runs, and in the race, I saved my tires and settled in, and it all came together in the end. Third place is a good result, and we’re tied for the points lead. It’s a super weekend for us. We’re going to keep doing what we’re doing and keep chipping away at it.