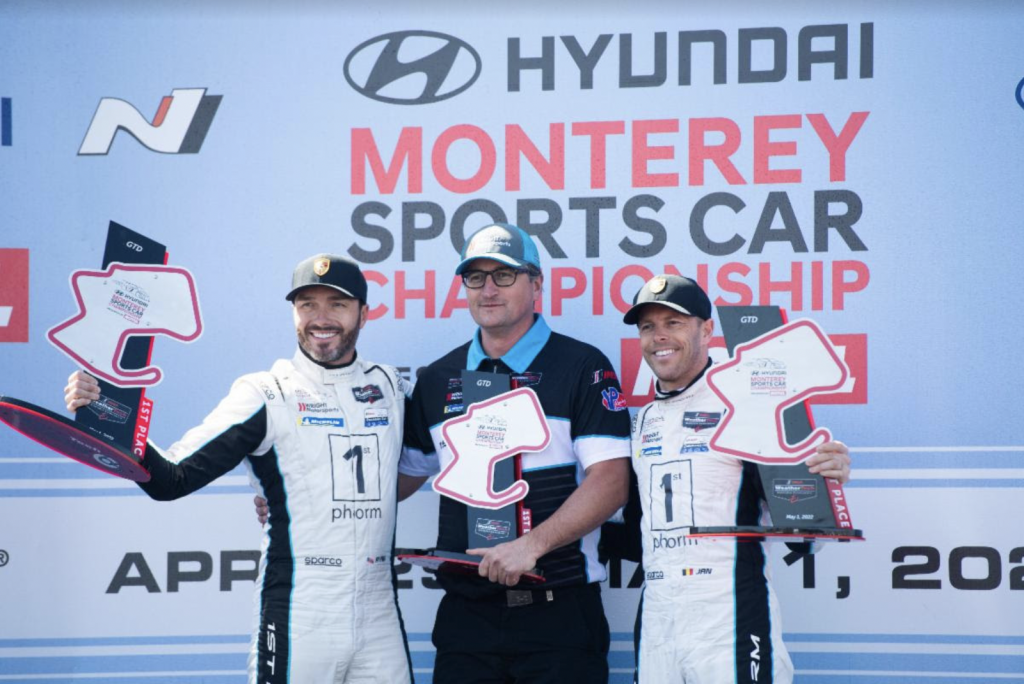 MONTEREY, Calif., (May 1, 2022) – Wright Motorsports closed out a successful race weekend at WeatherTech Raceway Laguna Seca on Sunday afternoon, returning the No. 16 1st Phorm Porsche 911 GT3 R to victory circle for the second time this season. With their California victory, the driving duo of Ryan Hardwick and Jan Heylen reclaimed their championship points lead in the GTD class, creating valuable momentum heading into the next rounds of the championship.

The 1st Phorm Porsche 911 GT3 R rolled off the team transporter ready to race, finishing in the top two positions in both of the weekend’s two practice sessions and pre-race warm up. Driver Ryan Hardwick struggled to get the perfect lap together during Saturday’s short qualifying session, putting the Porsche in a tenth place starting position in a GTD-class field of 14 cars.

The field took the green flag in sunny but chilly weather conditions, and Hardwick enjoyed a clean start, staying tucked behind the No. 28 of Michael de Quesada. He settled in, and the No. 28 spun on track shortly into the race, allowing Hardwick to assume the position, and focus forward on the No. 32 of Stevan McAleer running 7.9 seconds ahead. By the first full-course caution 30 minutes into the race, Hardwick ran eighth, with a clean stint behind McAleer. The team pitted Hardwick under caution, putting new tires and full in the Porsche with fuel. The expert stop by the Wright crew launched the Porsche up from eighth place to fifth place.

As the caution continued on, the team strategists in the pit box made an unusual call for Hardwick to pit as soon as his mandatory drive-time was complete, the team called him to come back into pit lane. He pitted from fifth position and Jan Heylen took over, ready to race the Porsche to the end, joining the event in twelfth place.

The race went back to green and Heylen charged forward, picking off the competition one by one. For several laps, the Belgian found himself stuck behind the No. 39 of Jeff Westphal. Keeping a careful eye on the fuel strategy, the team pitted Heylen for a final stop with an hour remaining, again giving the Porsche a new set of tires and a full tank of fuel to run to the end of the race. He rejoined in fourth, eager to get past the Pro class entry of Ross Gunn in the No. 23 car and resume his battle with Gunn. He eventually got by, and the Porsche came alive, charging for that final podium spot currently occupied by the No. 1 of Bryan Sellers, then Westphal. He quickly closed in on the No. 96 of Bill Auberlen, making a sweeping pass in turn five, taking the class lead.

From there, Heylen sailed to the checkered flag, claiming the class win on his 42nd birthday. The win marks Wright’s second win of the season, following the team’s victory in round one at the prestigious Rolex 24 At Daytona. The team had a mechanical issue in round two at the Twelve Hours of Sebring, racing from the rear to earn a top-ten finish, and then a monumental drive through the field at the Grand Prix of Long Beach secured the points of a top-five result. Sunday’s win brings the team back to the points lead heading into the next swing of the 2022 season.

Next up on the schedule is the Lexus Grand Prix at Mid-Ohio, May 13-15 at Lexington, Ohio, Wright’s home track. The team’s Batavia-based shop is located 171 miles southwest of Mid-Ohio SportsCar Course, the site of the next round in the IMSA WeatherTech SportsCar Championship. The race will take place on Sunday, May 15 at 2:10 PM Eastern, and run for two hours and forty minutes, airing live on the USA Network and Peacock. For more information, visit WrightMotorsports.com.

Ryan Hardwick
What a great race. This race really comes down to our entire team. I was able to take a couple cars in my stint, but the real gains came in the pit stops. I believe we overtook four cars in the pit lane and Jan was able to overtake four more cars during his stint. I really want to thank our entire Wright Motorsports team and Jan Heylen. I think this was a good birthday present to him. This was a great win for our team. We’re now leading the championship and going into a few races that I feel real comfortable at myself. I really like how this season is coming together for us.

Jan Heylen
This is one of the Porsche tracks. I have to say that we were all looking forward to coming here after Long Beach. It was a great team effort. Really understanding the track and the tire degradation is important here. I think that is what gave us the speed at the end, together with some great driving by Ryan and a really good strategy from the team again. I had to constantly tell myself to be patient and keep with the tires. This was the perfect race for us with the yellows. If the yellow comes out in the middle of that stint, I think you see a very different race. But the fact that we were out there the whole stint and able to look after the tires is what made us come out on top.

Porsche Carrera Cup North America Presented by the Cayman Islands
Wright Motorsports Porsche Carrera Cup driver John Goetz had his strongest weekend to date this season at WeatherTech Raceway Laguna Seca, earning a second-place finish in race one, and following up the strong result with a third-place finish in race two. He currently stands second in the 2022 championship standings for the Am class. Varun Choksey and Hutton McKenna each drove to earn a tenth-place finish, each both moving closer to their first top-five results of the season. Fans of Wright Motorsport can rewatch both races on the IMSA YouTube page. The Porsche Carrera Cup North America Presented by the Cayman Islands next races June 23-26 at Watkins Glen International Raceway in support of the Sahlen’s Six Hours of the Glen. Both races will stream live on imsa.tv, on Friday, June 24 at 1:25 PM Eastern and Saturday, June 25 at 11:05 PM Eastern, respectively.