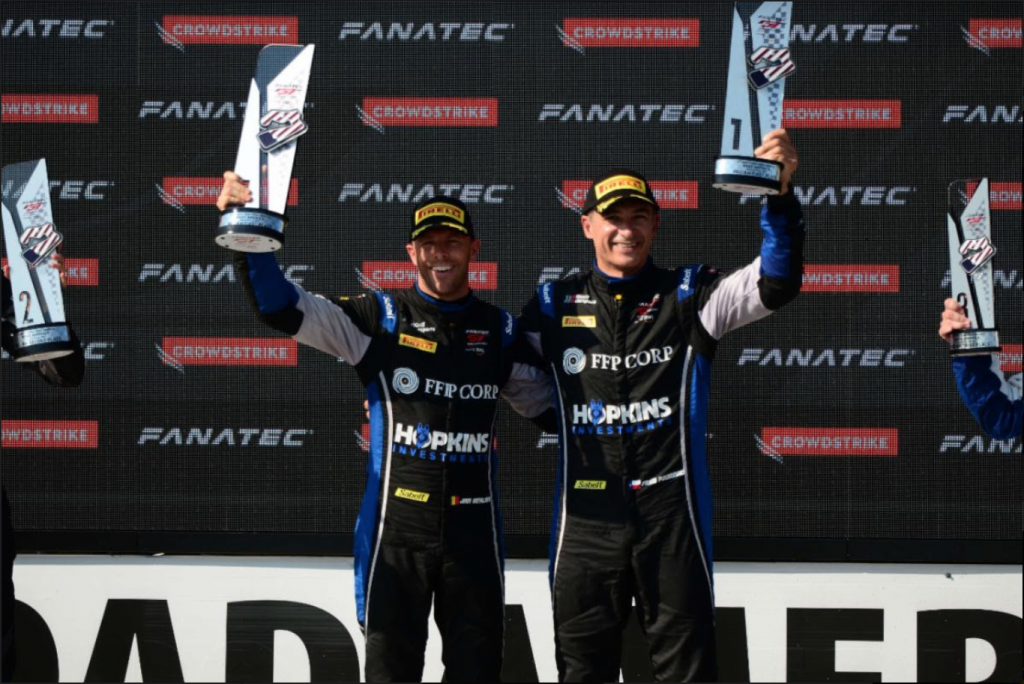 “Our entire team did a fantastic job all weekend,” said Team Owner John Wright. “It was great to see Charlie Luck continue his streak of podiums and get back on the top step. As for Fred and Jan, this was an excellent double podium weekend for them. I’m proud we were able to secure a win for them as well.”

GT World Challenge America
Poordad started Race One from fourth place in class and ninth overall, keeping position at the green flag. The field slowly spread out as the race continued, but Poordad stayed close to the next car ahead, the No. 9 Lamborghini Huracan of Martin Fuentes. With 63-minutes remaining in the race, Poordad claimed the position and shortly after came in for the mandatory pit stop. The No. 20 Porsche took fuel, hot tires and a new driver as Jan Heylen jumped in to take over. One of the Acuras running ahead of the Porsche had a poor pit stop, and quick work by the Wright Motorsports crew allowed Heylen to chase down the competition. He caught up to the No. 77 of Matt McMurray, closing the eight-second gap between them. A crash brought out a full course caution just as Heylen was positioned to fight for second place in class, ending the race with less than ten minutes remaining. Heylen and Poordad earned a third-place finish, continuing their season-long streak of podium finishes in the Pro/Am class.

Jan Heylen started Race Two on Sunday in slightly cooler temperatures than the day before. The No. 20 was gridded alongside the No. 93 Acura of Dakota Dickerson. Unlike the rest of the field behind him, Heylen enjoyed a relatively drama-free stint, holding second place and staying close to the leader throughout his stint. The 10-minute mandatory pit window opened and strategy from the Wright Motorsports pit box kept the No. 20 Porsche on track until the last minute, driving into pit lane as the window closed. Fred Poordad took over during the driver change and joined the race from fourth overall and second in class. He showed good pace as he focused on avoiding traffic and staying clean, keeping as close as he could to the No. 93 Acura, now with Taylor Hagler at the wheel. His patience paid off, and Hagler’s Acura suffered an issue on track. Poordad assumed the position and took the class lead. With no pressure behind, he ran the final ten laps with a calm pace and consistency, crossing the finish line in first place, taking the team’s first win since the season opener at Sonoma Raceway.

The victory gives the championship points leaders an even larger gap over the Pro/Am class competition. The three driver pairings in the points behind Poordad and Heylen were unable to compete in the weekend or had trouble at the Wisconsin circuit.

In about two weeks, the series will head east to upstate New York for rounds nine and ten of the GT World Challenge America championship, September 17-19.

Fred Poordad | No. 20 Porsche 911 GT3 R
That felt like a long time coming to get back on the top step of the podium. We felt we’ve been chasing that first-place finish for most of the season and I’m really happy that happened today. We didn’t necessarily have the fastest pace out there, but a few things rolled our way and we avoided a couple of mishaps and brought the car home clean. We’re very happy. Thank you, Wright Motorsports, and thanks Jan Heylen for, putting together an awesome effort today.

Jan Heylen | No. 20 Porsche 911 GT3 R
It was a good points weekend. I’m really happy to get another win it. I think we’ve given a few away this year, so you take them when you can. Today was a good day, and nice for the team and Fred. It extended our lead in the championship, so it was a near-perfect weekend for us. The Acura was extremely fast on the straightaways this weekend, and they definitely had the upper hand on us even though we had good speed. I’m happy with the result and ready to go to the next race.

GT America
Race One brought blistering temperatures on Saturday for Charlie Luck and the No. 45 Porsche 911 GT3 R. Luck started third overall after securing his class pole position. While cars fought for position behind him heading into turn one, Charlie Luck played it smooth, sliding into fourth overall in the opening turns. As he settled in, he started to put pressure on the No. 27 Audi of Jason Daskalos in turn five of the opening lap. Luck kept the pressure on, ultimately making the pass 15 minutes into the race. The Audi tried to put up a fight but was no match for the Wright Porsche. Luck pulled away, holding the position to the checkered flag, taking the class win and finishing third overall.

Race Two’s hopes were short-lived, despite an impressive start by Luck. Unbeknownst to the majority of the field, one of their competitors dropped oil over several turns of the circuit in the opening lap. As the field began race two, cars began sliding over the course in the opening turns and into turn five. As Luck and the No. 45 Porsche approached turn five, he tried to avoid the spilled fluid, but a spinning car tagged him in the turn, sending Luck’s Porsche spinning. While Luck was able to bring the machine back to pit lane, the points-leading car was unable to continue. Despite the disappointing result, Luck continues to lead the GT America point standings heading into the next rounds.

Charlie Luck | No. 45 Porsche 911 GT3 R
First off, overall we had a really good weekend. It might sound weird but yesterday, we were super concentrated on the task at hand. The car setup was perfect, and we ran a really good race. We were first in the Masters class and third overall. Today, there was oil down on the track and fortunately, we didn’t get in it, but other people did and that took us out. A-factor is the things we can control and B is the things we can’t control. This is something we couldn’t control, and we go on to test at Watkins Glen. We’ve still got four races left in the season.