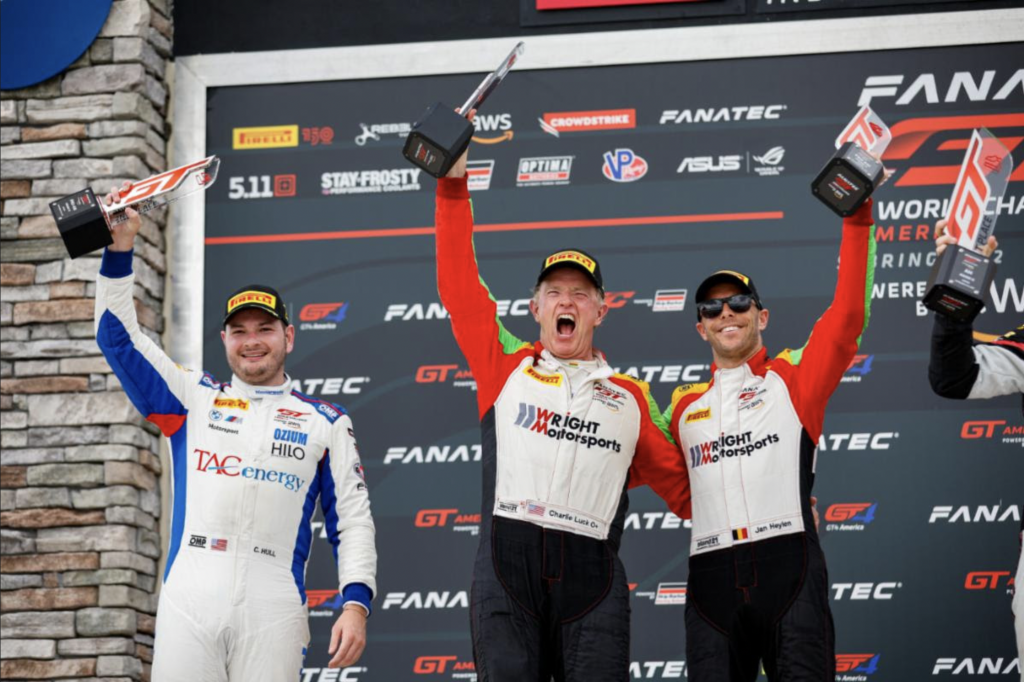 SEBRING, Fla., (September 26, 2022) – The penultimate event of the Fanatec GT World Challenge America powered by AWS kept competitors and race fans guessing all weekend long, but the consistency of Wright Motorsports never faltered. With a third-place finish and a win in the pair of races by driver pairing Jan Heyelen and Charlie Luck, the team momentarily lost the championship points lead, but gained it back as the weekend came to a close. The Ohio-based team will take the final battle for the Pro/Am class title to Indianapolis Motor Speedway in two weeks’ time for the Indy 8 Hour.

“Our guys really faced the heat on and off track this weekend and proved what they can do,” said Team Owner John Wright. “The competition in the Pro/Am class was incredibly exciting this weekend, and we continued to just do the best we can and place ourselves in the right place at the right time. Charlie drove a heck of a race on Sunday, even holding off the pros as he drove towards the win. Great job by all, and we’ll take it to Indy for the final fight.”

Charlie Luck showed his skills in qualifying, setting a fastest lap time to set the team up to start from second place in race one. A class change for the pole-sitting car brought the No. 45 Wright Porsche up to the pole position, and Luck led the field to green on Saturday afternoon. A crash by a competitor on the start brought out a yellow flag, and Luck battled with Ashton Harrison in the No. 93 Acura on the restart. After a side-by-side battle through the opening turns, Harrison took the position, but Luck stayed close. The notorious bumps took another victim as Luck battled for position, and he spun. Luck and the Porsche masterfully recovered, rejoining in third place. He pitted during the mandatory window, and another flawless pitstop from the Wright crew brought Heylen out in third place. With 47 minutes remaining on the race clock, Heylen joined the race, over five seconds behind the second-place car, separate by an Am-class car. He passed the Am car with 23 minutes remaining, intently focused on closing the gap to the second place entry and championship points contender, Colin Braun in the No. 04 Mercedes AMG. He caught up to Braun as the Mercedes battled with the race-leading Acura of Mario Farnbacher, and the trio engaged in a three-wide battle for the lead in the final lap. In the end, Wright finished third, unofficially sliding down to third in the championship points.

Determined to reclaim the lead in the championship points, the Wright Motorsports effort entered Sunday’s race day focused and with the intent to execute perfectly. Set to start the second race from seventh overall and fourth in class, Heylen gained a position on the pace lap when the points-leading Acura of Ashton Harrison pitted with mechanical issues, immediately removing the entry from competing for the win. Heylen continued in third, chasing the No. 08 Mercedes of Bryan Sellers. He made the pass in Turn 17 at the 30-minute mark, charging forward. He pitted in second place, and Charlie Luck took over for the second and final stint of the race, being led by the No. 13 of Justin Wetherhill. Over 5.5 seconds separated Luck from the class leader but Luck’s determination and skill through the turns of the 3.741-mile course allowed him to make steady gains to close the gap. Meanwhile, Manny Franco, racing the Pro-class No. 34 car put heavy pressure on Luck. With six laps to go, Luck found himself fighting for the class lead, with two Pro-class cars separating him from the third-place car of George Kurtz. As the field swept through turns three, four, and five, Luck pulled a masterful pass on the inside of the Ferrari of Wetherhill, taking the class lead. He charged forward, celebrating victory at the finish line. The team’s fourth win, combined with the previous day’s podium, moves the team back up to the championship points lead in the Pro/Am Class.

The final fight for the Fanatec GT World Challenge America powered by AWS title, which Wright Motorsports won in 2021, will come down to the Indianapolis 8 Hour on Saturday, September 8. Running in the Intercontinental GT Challenge, the Indianapolis weekend will differ from the usual pair of 90-minute races. The eight-hour-long endurance event will be the sole race for the GT America competitors, awarding double points to the top-ten entrants. The race will air live Saturday, September 8, at 12:00 PM ET on Youtube.com/GTWorld.

Charlie Luck // No. 45 Porsche 911 GT3 R
Jan did a hell of a job yesterday. He came from nine seconds back from P3 position to right at P3. He was mega yesterday, I was not good. I had an accident, spun, and recovered, fortunately. Today was everything I had and everything the crew had. We did some super setup changes, and it was the drive of my life.

Jan Heylen // No. 45 Porsche 911 GT3 R
What a race! Bryan Sellers is always fun to race with. It was a fun move going for first position there and it was just an awesome stint by Charlie with all that pressure from behind. This was the best I’ve seen him drive, so I’m really happy with the result. It was a good points weekend for the championship and I’m very excited to go to Indy now.