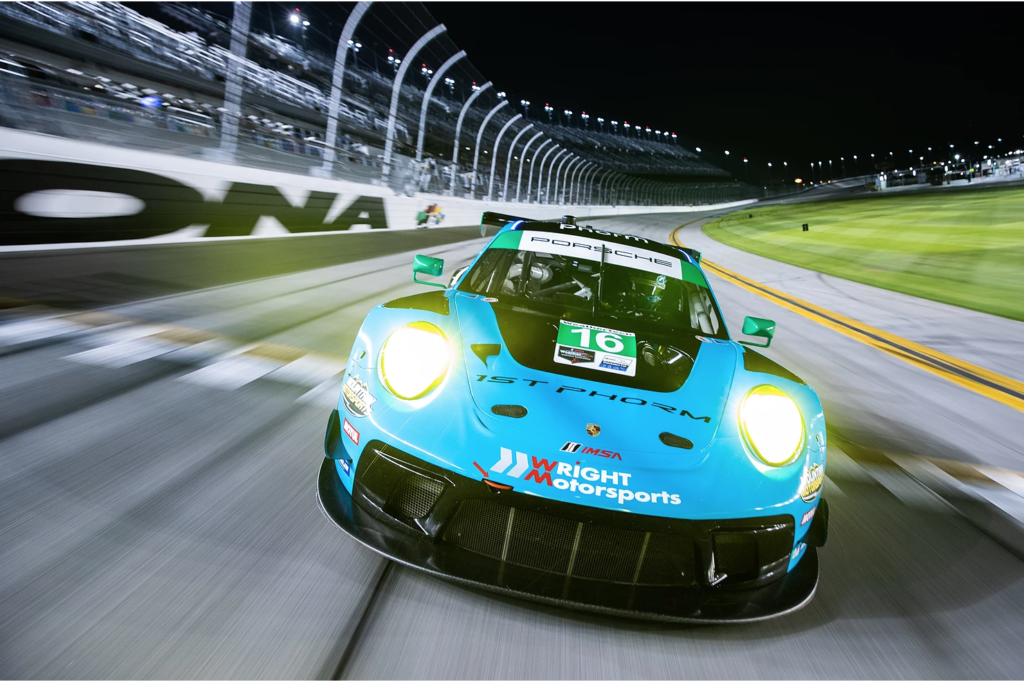 BATAVIA, Ohio, (July 1, 2020) – Wright Motorsports is finally back in action this weekend, racing in the Weathertech 240 at Daytona International Speedway, following a five-month pause in the calendar, due to the COVID-19 pandemic. The IMSA WeatherTech SportsCar championship rearranged the 2020 schedule, returning to Daytona, the only track the series has raced at so far this season.

“It’s a great feeling to be going back to racing,” said team owner John Wright. “Our guys have been working hard to get our entire operation back up and running, and we’re excited to be able to get back on track with our partners.

The GTD team will return as a one-car operation in the IMSA WeatherTech SportsCar Championship, running the No. 16 1st Phorm Porsche 911 GT3 R with drivers Ryan Hardwick and Patrick Long.

“This upcoming race back at Daytona means a lot to me for a couple of reasons,” said Hardwick. Obviously it marks the return to racing that our fans and everyone in our industry have been looking forward to, but this race is also a significant milestone for me personally. One year ago, on the 4th of July weekend in 2019, I was involved in a big crash at Canadian Tire Motorsport Park which left me with a severe knee injury that took me out of racing for the remainder of that season.

This upcoming Fourth of July race weekend marks a full year from that incident. Over the past year, I’ve invested a tremendous amount of time putting in the work physically and mentally to get back to where I was a year ago, and to continue to improve as a racing driver. I simply can’t wait to be back in the race car! It’s been a long time coming for me.”

The team enters the second round of the season in fourth in the GTD class championship points, following an impressive top five-run in the season-opening round, the Rolex 24 At Daytona. Instead of the normal three to five-day event, the WeatherTech 24 at Daytona has been condensed to two days of on-track action. The first practice will take place the evening of Friday, July 3, and the remaining practices, qualifying, and race happening on Saturday, July 4.

“It is great to get back to racing,” said Long. “It is ironic that it will be right back to where we ran last. I have a lot of good memories running at Daytona on the Fourth of July back in the GRAND AM days. The limited track time is always interesting. You have to come off the truck and be right there. I like that format for the future.

“I look forward to putting on a good show for the limited fans at the track and the ones watching on TV. I want to maintain the momentum. We started with a good run at the Rolex 24 and I’m keen to get back to working with Ryan. We have been training on the sim but eager to get back out there in the Wright Motorsports Porsche and get a podium on the board for our supporters at 1st Phorm, Mountain Motorsports, and Una Vida Tequila.

The latest supporting sponsor to join Wright Motorsports, Una Vida Tequila has recently joined the team, an additional sponsor hailing from the Midwest. Locally owned, the company was founded by people who want to live their “One Life” to the fullest, creating a positive community and high-quality tequila.

The WeatherTech 240 at Daytona will air live in the United States from 6:00PM to 9:00PM Eastern on NBC Sports Network. Thanks to Michelin’s limited offer, some fans will be able to watch the entire IMSA season for free without a cable subscription by clicking this link, and entering in the code MICHELINIMSA. International audiences can watch live on imsa.tv. For more information, visit imsa.com.