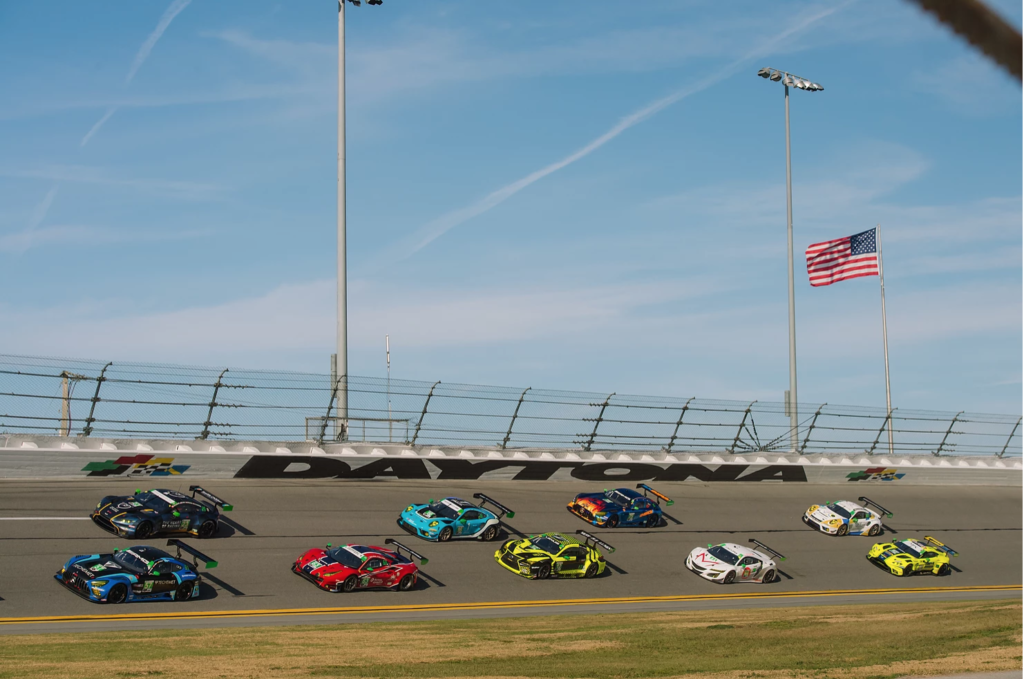 DAYTONA BEACH, (February, 1, 2021) – For the second year in a row, Wright Motorsports has produced a near flawless performance during one of the most challenging sports car endurance races in North America to finish fourth, just seconds shy of a podium result. Racing the No. 16 1st Phorm Porsche 911 GT3 R with drivers Patrick Long, Jan Heylen, Klaus Bachler, and Trent Hindman, the team put on a clinic for overcoming on-track adversity, rebounding from contact from another car to race at the front of the GTD class for a fight to the finish.

“I really want everyone on our team to be proud of our finishing result,” said team owner John Wright. “Daytona is a challenging event, and as we saw with many of our competitors, she can deal you a tough hand. But we had the best people in pit lane to keep moving forward and create the best outcome possible. “

The Rolex 24 at Daytona was nothing short of a test of character for Wright Motorsports. Following an incident during the Roar Before the 24, the Ohio-based team was forced to switch to and rebuild another chassis ahead of the Rolex 24 At Daytona, as well as add driver Trent Hindman to replace an injured Ryan Hardwick. The team had the car ready to qualify for the main event, setting a grid position of ninth place for Saturday’s 3:40PM start.

Jan Heylen’s opening race stint immediately had the Belgian driver on his toes, when contact at the front of the GTLM field resulted in several cars dodging a spinning Porsche as the field came to the green flag. Heylen managed to avoid any conflict from his starting position and climbed to fifth place in the opening laps. As predicted by many, the addition of the LMP3 class added to the on-track action throughout the race, and especially the first stint. The first hours of the race were presented with several full-course cautions, allowing the Wright Motorsports team to showcase the efficiency of their pit stops, by gaining additional positions as the field came in for tires and fuel.

With a 3:40PM start time, dusk settled on the track early into the race, and the Wright Motorsports Porsche 911 GT3 R had already climbed to second position. Trent Hindman took over from Heylen under caution, entering the race in third. Due to Hindman joining the team just days before the race, his almost 90-minute stint was the longest amount of time he had been in the car. The GTD champion adapted well, racing clean and taking care of the car in what proved to be another chaotic stint of multi-class traffic and on-track incidents.

Klaus Bachler was the next driver to take over, taking advantage of the strong position Hindman had helped hold the team in, and at the five hour mark, the young German brought the team to the GTD class lead after a smooth pass on the No. 97 of Charlie Eastwood. He extended his lead during his stint, and Patrick Long stepped in as the final driver to turn his first laps just before 10:00PM. Unbeknownst to the public, Long’s radio had a technical issue, resulting in him lacking team communications for a good portion of his stint. He continued to manage as the team worked to troubleshoot the issue from pit lane, trying to also maintain his six second gap over the No. 1 of Bryan Sellers. While the gap had significantly closed before the end of his stint, Long still closed out his run as the GTD class leader.

Heylen resumed his driving duties at 11:00PM, maintaining a top four position in the first hour until contact from another car spun the No. 16 Porsche. In the early minutes of Sunday morning, the No. 16 1St Phorm Porsche had to pit to assess the damage to the left side of the car, making an unplanned pit stop. The incident dropped the Porsche down to 12th place, and down two laps. While the team was able to continue, the damage hampered the team’s performance, resulting in the No. 16 car not being able to be as competitive as before the contact.

In the hours to follow, the driver rotation continued, and the engineers and strategists on pitlane expertly utilized the full-course cautions and wave-around procedures to get back on to the lead lap by 2:00AM. While typically the night hours are for maintaining position and focusing on survival to fight in the morning, everyone at Wright Motorsports stood focused on getting back to the front end of the field. Stint by stint, caution by caution, the 1st Phorm Porsche climbed her way up the charts. By 8:00AM the team found themselves back in the top three, ready to fight for a coveted podium position.

The hours that followed showed an increase in tension as well as accidents, with several cars going off course while pursuing advancement of their position. The battle for the top three intensified, with four cars continually rotating through the podium spots. In the end, the 1st Phorm Porsche finished in fourth, and while not on a podium step, the team started the 2021 season off with a strong championship points pull. The series next travels back to Florida for the Mobil 1 Twelve Hours of Sebring, March 17-20, 2021. The race will serve as the second round in the four-race North American Endurance Cup, and endurance race championship within the 2021 full season championship. For event information, visit imsa.com.

Patrick Long
This was a great start to the season from a points perspective. Naturally, we were hoping for a podium and striving for a victory, but it unraveled for us after contact with the No. 9 car in the evening. The damage to the car hurt us. From there, we were just trying to push as hard as we could in the changing conditions and have a clean race. We executed all day but things happened outside of our control, and that is what dictated the result for the day. There were strong cars ahead of us today, but a lot of our full-season competitors had hard days. I am proud of the whole Wright organization, and we have our eyes forward to Sebring. This one goes out to Ryan Hardwick.

Jan Heylen
First of all, a big thank you to Ryan Hardwick, 1st Phorm, Mountain Motorsports, and Una Vida Tequila for making this event happen and letting us race here. It is one of my favorite events to do, and to do it with Wright Motorsports and the teammates we had all month, it was special. The team did an amazing job leading up to the race to produce a car that we could race with, and we had a reliable car. We had zero mechanical issues, and no issues in pit lane. It shows how good Wright Motorsports is and all the guys work so well as a team. Hats off to them. They did an amazing job. It was a long week for everybody. We were really hoping at the end to pay Ryan back with a podium. We came close, and we did everything right, but just didn’t have it in the end, likely due to the impact from the other car. It’s tough to race for 24 Hours and to be there right at the end. Such is racing, and it was still an amazing experience. I look forward to going back to Sebring to do it all over again.

Klaus Bachler
Obviously, it was a great job by the whole team, for the entire month. It took a lot of work to get us racing and everyone on the team did a great job. Ryan is okay, and that’s the most important thing. We had a really good start to the race, but then bad luck hit with that late night incident when that other car that hit us. We struggled a bit after that, but in the end, we gave everything to stay out front. It was a great day for the championship and points. Thanks to everybody for their hard work.

Trent Hindman
First off, I want to give a big thank you to Ryan Hardwick, John Wright, and the Wright Motorsports team for having me this week. I know it was a difficult situation, but I’m glad I was here and able to fill in and at least try to compete for the win. I think it became pretty clear pretty early on that there were just some cars that were going to be hard to beat. But our strategy was perfect, the team made zero mistakes at all. We nailed every single pit stop. So, it was just a pleasure to see that operation. I’m not necessarily looking forward to ever competing against them again, but really just a big thank you to all the guys over there for welcoming me with open arms and giving me the opportunity to join the team.