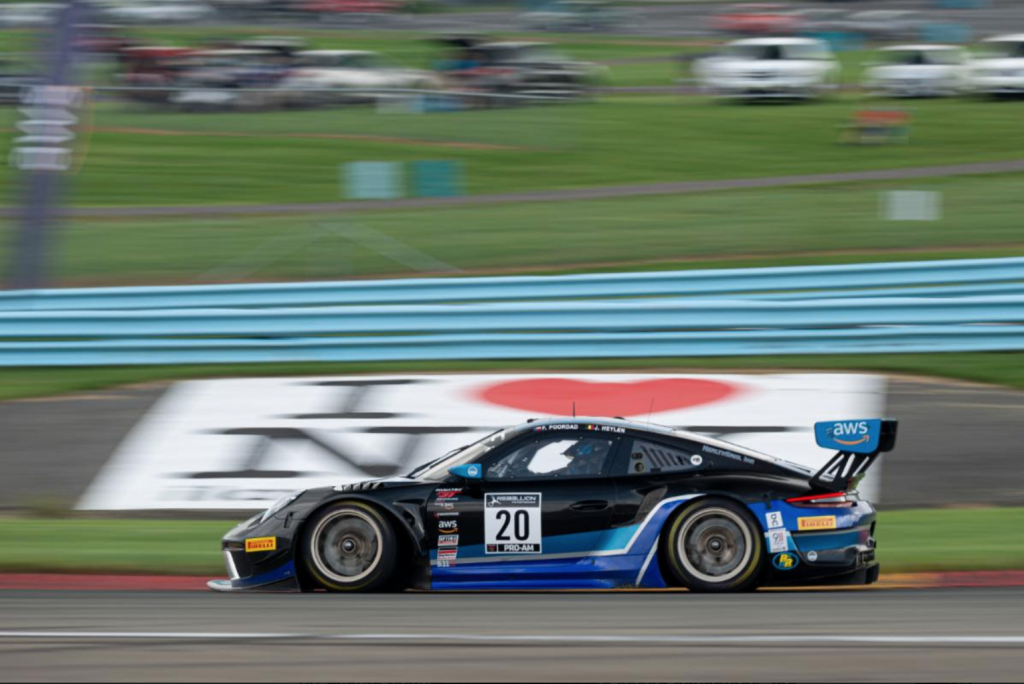 WATKINS GLEN, N.Y. (September 19, 2021) – Consistency is the name of the game for Wright Motorsports. The John Wright-led team celebrated another rewarding sports car racing weekend in SRO America, earning two pole positions and three podiums across its two Porsche racing efforts at Watkins Glen International. Both Porsche 911 GT3 R race cars had strong performances in each of the races, producing another points-hauling weekend to maintain the championship lead Fred Poordad, Jan Heylen, and Charlie Luck have accumulated throughout the season.

GT World Challenge America powered by AWS
Fred Poordad and the No. 20 Porsche 911 GT3 R started race one from third position after a red flag cut short his qualifying run earlier that morning. He lost a position at the start but soon recovered and settled into a strong race pace, holding off pressure from Martin Fuentes in a Lamborghini for fifth-place in class. The battle would end up lasting the majority of the race, as Jan Heylen also fought hard with the Lamborghini’s second driver, Giacomo Altoe, for the duration of his stint in the 90-minute feature. Despite having the speed advantage, the Lamborghini defended heavily and the two ran side by side to the checkered flag with Altoe bettering the Wright car by just 0.033 seconds.

Eager to bring in a podium result to secure more championship points, Heylen was not lacking motivation when he started from the Pro/Am class pole position for race two, second overall. He stayed close to the race-leading Lamborghini of Andrea Calderelli, maintaining the position until the pit window opened. The No. 20 Porsche pitted with Fred Poordad taking over with a hot set of tires and a serving of fuel. Michael Di Meo got by the Porsche and pulled away as Taylor Hagler’s Acura started to close in with 15 minutes remaining. On Hagler’s tail was Martin Fuentes in the No. 9 Lamborghini, and the three cars engaged in an exciting battle for second-place through the twists and turns of Watkins Glen. Poordad raced flawlessly, keeping the Porsche ahead of the competition, earning the effort’s ninth podium finish in ten races, protecting their championship points lead.

The championship will move next to Sebring International Raceway after the Florida-based circuit was named as the replacement for the canceled race weekend at Canadian Tire Motorsport Park in Ontario. Rounds 11 and 12 of the 13-round championship will be run on the historic track, October 1-3.

Fred Poordad | No. 20 Porsche 911 GT3 R
That was a tough battle there at the end of race two. I had a lot of pressure from the Lamborghini and the Acuras. One of the Acuras slipped by, but I managed to hold off the others until the checker flag. I felt better in the car today physically after an off day yesterday in race one. We didn’t get the results we wanted yesterday, but I feel like this is good momentum to carry us into the next rounds at Sebring, and that’s a track we really enjoy.

Jan Heylen | No. 20 Porsche 911 GT3 R
We had a good recovery today from a little bit of a disappointing race yesterday. The team gave us a good car all weekend, and we started with a good qualifying run from both of us. Yesterday was a tough race, but we’ve had a lot of really good races this season, so once in a while, it happens. I’m happy to see us come back as strong as we did today. Fred had an unbelievable run with a lot of pressure for most of the race. It was a really good job by everybody. I’m happy to finish back in the podium ahead of the Acrua we’re fighting in the championship.

GT America
Charlie Luck’s streak of victories and podium finishes continued at the track in the Finger Lakes region of New York, where the Masters racer controlled race one from pole position, extending an early lead, and quite literally, riding off into the sunset to take his seventh class and second overall win of the 2021 season. His fastest lap from a smooth race one set Luck up to start from overall pole for the second race. As he did the previous day, Luck pulled away as the green flag waved, creating a gap over Jeff Burton. Six laps later, Burton caught up and made the pass for the lead with 27 minutes remaining on the race clock. Luck’s battle with Burton allowed Andy Wilzoch in third-place to catch up to the first two cars, producing an intense 15-minute battle between the pair of Porsches for second-place. In the final minutes, the side-by-side racing resulted in contact, both cars spinning into the wall at turn nine. Luck came into pit lane immediately and was able to finish the race in second-place at the checkered flag.

Luck’s final race of the year will take place at Indianapolis Motor Speedway. Rounds 13 and 14 of the 2021 season will be part of the SRO Eight-Hour weekend at the “Racing Capital of the World”, October 2 – 4.

Charlie Luck | No. 45 Porsche 911 GT3 R
Taking the overall win in race one was a huge highlight for me. I was really pleased with how we did in that race. The preparation for the Porsche 911 GT3 R was perfect and my driving was good. There were things I could have done better, as always, but that was a really good finish. It was fantastic to start race two from pole position for two races. We were slow in two corners that handicapped me a little and led to an incident with another car at the end. So we’ll move on to Indianapolis and come back 100% for the final two races.