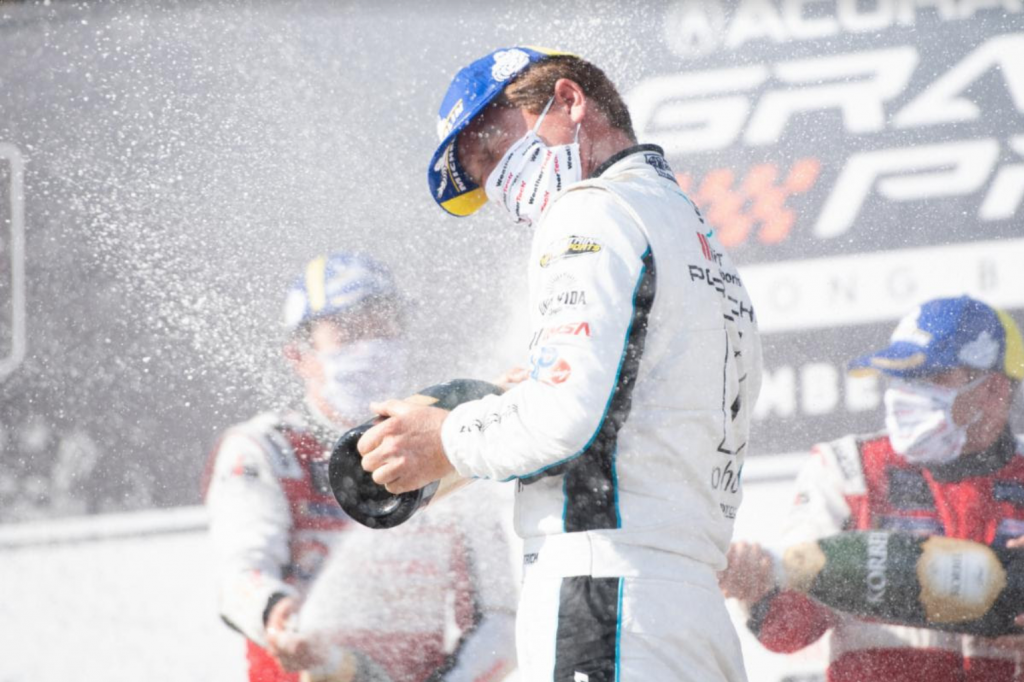 As is the usual for street courses, the three pre-race practice and qualifying sessions were hampered by red flags, eliminating the amount of time the competitors had to run on track and dial in on their optimal setups for the race. Following a tight qualifying session, Trent Hindman set the team to start sixth on the 17-car GTD grid.

The field took the green flag under perfectly sunny conditions, and Hindman held sixth behind the No. 63 Ferrari of Daniel Mancinelli. Hindman stayed close with consistent lap times, moving to fifth place by the first full-course caution. He restarted behind the No. 9 of Zacharie Robichon, and the battles immediately commenced at the drop of the green flag. After a side-by-side fight between the points-leading No. 96 BMW of Robby Foley and the No. 39 Audi of Richard Heistand, the BMW went nose-first into the tires, advancing the Wright Motorsports Porsche to the fourth position.

With 60-minutes remaining, the team called Hindman in for the one and only pit stop of the day. The No. 16 Porsche took on fresh tires and fuel, trading out Hindman for Patrick Long as well. The team executed a flawless and speedy stop, gaining a position in pit lane as Long rejoined the race. The Lamborghini of Bryan Sellers led the GTD field with the No. 14 Lexus of Jack Hawksworth and Patrick Long charging behind in second and third. The No. 39 Audi tagged another car, this time the Wright Porsche, while exiting the hairpin. The Audi made contact with the Porsche’s right rear corner, but Long expertly saved the car from hitting the wall and was able to continue without losing position. While Long charged forward and closed in on the Lexus again, the No. 9 Porsche of Laurens Vanthoor joined the fight, eventually taking third place from Long.

It was a four-car battle for the final two podium spots in the final 13 minutes. Vanthoor passed Hawksworth and pulled away, lighting a fire on Long’s competitive spirit as well. The strategists in pit lane gave Long the “all-clear” to push with all effort, and after an excruciating several laps of navigating through traffic and the tight turns of the Long Beach street circuit, Long dove on the inside of turn eight, overtaking the Lexus and securing third-place.

He wasted no time putting distance between the 1st Phorm Porsche and the Lexus, pulling away and closing the several-second gap to the Pfaff Porsche in the span of one lap. In the end, the tight circuit allowed little area to pass in the final lap, and the Wright Motorsport Porsche earned a third-straight podium finish, keeping the championship battle incredibly tight at the conclusion of the weekend.

Unofficially, Wright Motorsports is fifth in the 2021 team championship standings, just 207 points away from the leaders. With 350 points awarded for a race win and 35 for pole position, the pressure will only increase for the two remaining events.

VIRginia International Raceway will host the GTLM and GTD classes in the Michelin GT Challenge, October 8-9, and the season will close out at Michelin Raceway Road Atlanta for Petit Le Mans, November 11-13. For more information, visit imsa.com.

Patrick Long
It was typical street racing: hard-nosed. We had a well-balanced car. I was fighting with the 14-car and I tried to square him up and get a run onto the back straightaway and unfortunately clipped the inside wall and lost a position. I gathered it back up and fought back to a podium position. I am happy to salvage that to go three in a row with podium finishes but we wanted to be a little further up the box. I am so proud of these Wright Motorsports guys. The pit stop was unbelievable. I am pretty confident that we had one of, if not the best, pit stop of the race. That is what got us into clean air and gave us a shot at the end. We will fight all the way to the final race.

Trent Hindman
Everyone on the 1st Phorm Wright Motorsports team should be proud today. Qualifying was rough, rough to say the least. For the guys to be able to pull through with the job they did on pit lane and the speed of the car they put underneath us, they should be really proud. We are really pleased we were able to bring home a podium today and salvage a good result of what was, otherwise, looking like a tough weekend.