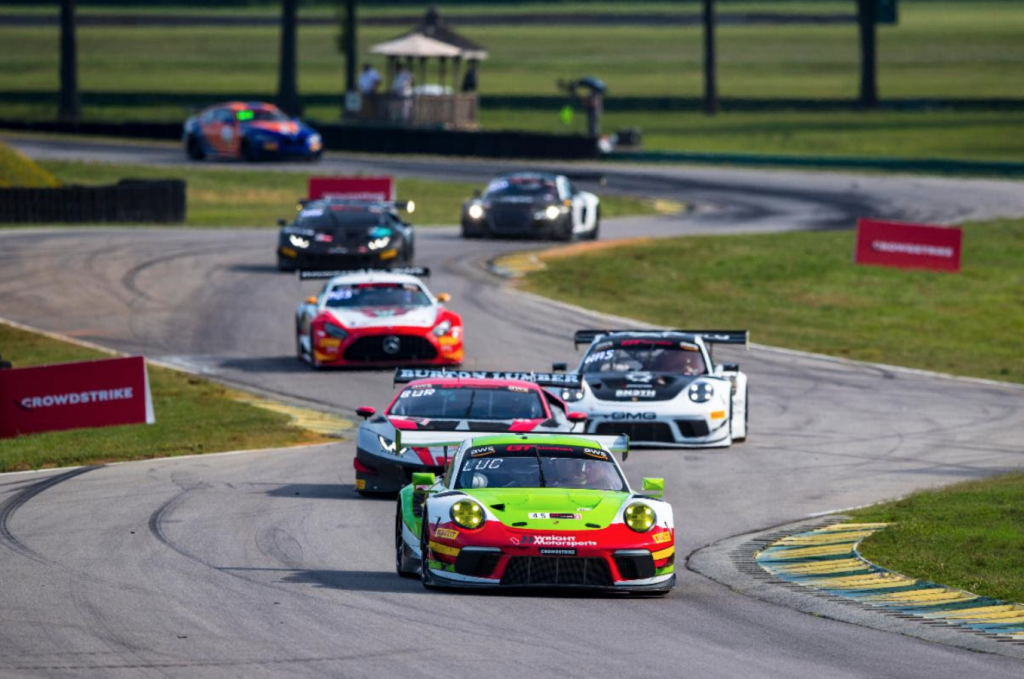 ALTON, Vir., (June 7, 2021) – After securing four podium finishes across four races in the Fanatec GT World Challenge America and GT America series, Wright Motorsports has extended their points lead over the competition in both championships, showcasing the strength and consistency of the Porsche customer racing program. The No. 20 Porsche 911 GT3 R of Fred Poordad and Jan Heylen earned two consecutive podium finishes in the headlining races, and Charlie Luck secured double wins on Saturday and Sunday in the No. 45 Porsche 911 GT3 R in GT America.

After an impressive opening qualifying session by Fred Poordad in the No. 20 Porsche 911 GT3 R, the Wright Motorsports Porsche started race one from the Pro/Am pole position and fifth overall on Saturday afternoon. He maintained his position with smooth, clean laps throughout his stint, gaining a position before the mandatory pit stop. The field had a brief caution before the pit window, and the Wright Porsche came in for its pit stop after one lap of being back to green racing. Like many of the competitors in pit lane, the team faced attrition during the stop, rejoining fourth in class and seventh overall. Not discouraged, Jan Heylen took over from Poordad, methodically climbing back up the chart. He quickly took sixth overall, claiming third in class, then charged towards the No. 93 Acura NSX, running in second. He took the position, also breaking into the top five overall with just a few laps left. He held on to second place to the checkered flag, earning the fifth consecutive podium for the No. 20 Wright Motorsports Porsche 911 GT3 R, and holding on to the points lead.

The weekend heat hit an all-time high just in time for race two at VIRginia International Raceway. Jan Heylen started the No. 20 Porsche 911 GT3 R from class pole position, side by side next to the overall polesitter. He kept the position in the opening two laps, and a full course caution appeared, briefly halting the fight. On the restart, Heylen charged forward, putting heavy pressure on the No. 33 of Mikael Grenier. The Wright Motorsports Porsche held tight and set up the pass, taking the overall lead with 43 minutes remaining. Heylen pitted shortly after, bringing the car in for tires, fuel, and a driver change to Fred Poordad. The No. 33 Mercedes rejoined with their Pro-ranked driver, and after a brief battle, the Pro/Pro car assumed the lead. Not long after, the team received a call for a drive-through penalty for a rare pit lane infraction. The team quickly acquiesced to the call and rejoined in third behind the No. 63 Mercedes and the No. 77 Acura NSX GT3. Poordad focused forward, quickly pulling in the No. 63, passing down the inside of turn one to take second place in the Pro/Am class. He held the position to the checked flag, earning another second-place finish, securing valuable points in the championship fight. In the provisional standings, the No. 20 Wright Motorsports pairing of Fred Poordad and Jan Heylen hold a 28-point lead over the No. 04 DXDT Racing duo of George Kurtz and Colin Braun.

From VIRginia International Raceway, the GT World Challenge America competitors have two and a half months off until rounds seven and eight at Road America, August 17-29.

We’re making it a habit of coming in second, but it’s a learning experience that will only make the team stronger; we’re going to gel together over this. We showed good pace, the team did a great job and gave us an awesome car. We look to get even stronger over the rest of the season. Big thanks to Wright Motorsports and Jan, my co-driver.

All in all, it was a good weekend with two podium finishes. Bringing the car up to first place twice and then losing out is all a part of racing and we win and lose as a team. We learn from every weekend and come back and be better prepared. We extended our points lead, and that’s what’s most important, even though we’d love to have been on the top step today.

Charlie Luck earned his first overall win in GT America on Saturday afternoon, after starting from pole position. He took the green flag for the 40-minute race, holding off the No. 70 McLaren of Brendan Iribe, despite the McLaren being in a higher class. Lap after lap, Luck proved to be smooth and measured, but ultimately, the No. 70 got by. The next few laps of the race produced a three-way battle for position, with Luck and George Kurtz and the No. 04 Mercedes AMG GT3 again dueling for position while Iribe got shuffled back to third. Luck took the position and Kurtz pitted with a flat tire, allowing Luck to pull away and secure his first overall win, and at his home track.

Under similar conditions the following day, Charlie Luck put in another successful performance in the Wright Motorsports No. 45 Porsche 911 GT3 R. He started from third place overall and jumped to second in the opening turns. He briefly took the overall lead position from Iribe, but the faster class car soon reclaimed its position. Luck held second place overall for the remainder of the race, finishing first in class, sweeping the weekend. Luck’s success of the weekend not only keeps him in the lead for the Masters points but also moves the driver up to the points lead in the main SRO3 class as well.

Rounds seven and eight of the 2021 GT America championship will see a new venue: a temporary street course in downtown Nashville at the Music City Grand Prix, August 6-8.

This weekend has been over the top. It’s been a bunch of learning. Yesterday, we battled and fought hard and did some pushing and bumping. Both Brendan Iribe and George Kurtz did such a good job. I think the learning today is all about pace. We got in the wrong spot at the wrong time with traffic, where Brendan was able to make it through quicker than we were. The biggest takeaway this weekend is able to bring is confidence. I know I can drive this car, and I have a much higher degree of confidence with each race. How cool is it to be able to do this in the sport we love with people you enjoy doing it with? It is such a privilege to compete in this sport.