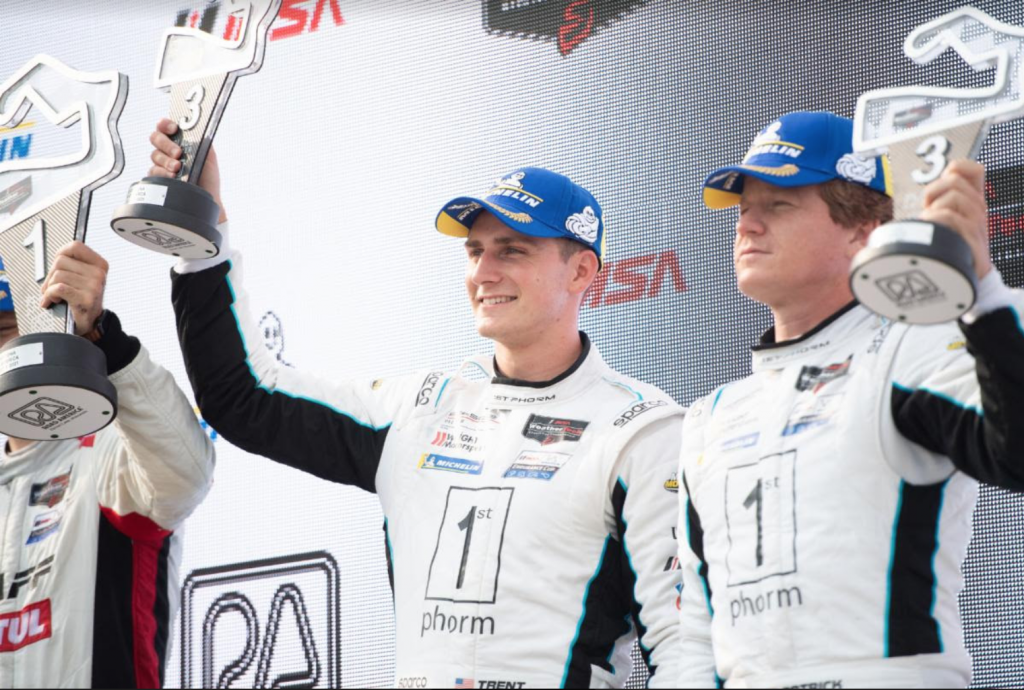 ELKHART LAKE, Wis., (AUGUST 9, 2021) – Wright Motorsports picked up several podium finishes on Saturday and Sunday during their multi-city race weekend in Elkhart Lake, Wisconsin, and Nashville, Tennessee. Patrick Long and Trent Hindman earned their first podium together as a pair, following their second-place finish at the Twelve Hours of Sebring with Jan Heylen. In the Porsche Carrera Cup North America, John Goetz earned a third-place finish on Sunday in Wisconsin, followed by Charlie Luck securing a double-podium weekend on the streets of Nashville in the Music City Grand Prix.

“It was no doubt a busy weekend for our entire team,” said team owner John Wright. “It was great to get the GTD guys back on the podium, and wonderful to have Charlie Luck have such a strong performance in Nashville. Everyone on our team did an excellent job making sure all of our bases were covered with our various programs. We’re looking forward to the final push of the season to fight for those championship points in each program.”

IMSA WEATHERTECH SPORTSCAR CHAMPIONSHIP
In Wisconsin, the weather conditions threw constant curveballs to the team all weekend, causing a tire dance from rain tires to slicks. After several days of rain, Trent Hindman started the race under sunny skies in second but slipped to third after the race leader made a questionable move on the start. The leader was penalized, moving the No. 16 Porsche 911 GT3 R back up to second place. The New Jersian held the position until the first full-course caution when the team’s speedy work in pit lane moved Hindman up to first place of the cars that opted to pit. The field went back to green with exactly two hours remaining, and a series of cautions continued to plague the race. The No. 16 was passed on one of the restarts, moving the blue, black, and white Porsche to third. Hindman maintained position to the end of his stint when Patrick Long took over the driving duties. The Californian ran the entirety of his stint in third, with twelve seconds separating the top three cars. In the end, the car was unable to close the gap to the leaders, and Wright Motorsports finished third, holding tight to their fifth-place standing in the GTD team championship points. The series has a one-month break until the ninth race of the year: the Hyundai Monterey SportsCar Championship at WeatherTech Raceway Laguna Seca, September 10-12.

Patrick Long
I’m happy to get back onto the podium after a few rough races. It was a classic endurance race where track position, strategy, and a flat-out last stint was required and was a lot of fun. I am proud to get the 1st Phorm /Wright Motorsport colors back onto the podium and try and build on this momentum as we head to the west coast.

Trent Hindman
Really good job by the 1st Phorm Wright Motorsports team today. As always, we had the speed that we have had but the luck just hadn’t gone our way. Today, we finally had the fortune in our favor. Great job by Pat and the Wright boys. Big thanks to everyone for their hard work.

MICHELIN PILOT CHALLENGE
The weekend looked promising for the No. 16 Porsche 718 Cayman GT4 Clubsport in Michelin Pilot Challenge, as the team entered the Road America 120 tied for the points lead. The team started the weekend strong, placing first in the opening practice session and fourth in the second. Ryan Hardwick qualified in third for Saturday’s starting position and had a clean start to the race. The conditions were mixed at the green flag, and the No. 16 Porsche started the race on rain tires, with hopes the storm would increase as the race continued. Unfortunately, conditions stayed semi-dry, and the No. 16 Porsche lost some positions as the race line started to dry out. As the starting drivers reached their minimum drive time, the rain picked up, and the Porsche spun, having contact with the wall in the corner known as “The Kink”. Though the car was able to resume the race, after some laps, it was clear it would not be able to continue and stopped on track. Unofficially, the team stands tied for third in the team points standings heading into the final events of the year. The team will get a chance at redemption at the next round, the Monterey Sports Car Championship at WeatherTech Raceway Laguna Seca, September 10-12.

Ryan Hardwick
That was a disappointing result, to say the least. We were very competitive and fast all weekend in dry conditions, but during the rain, the car was difficult for me to drive. I struggled to find the pace of the leaders, and towards the end of my stint, I started getting some pace, and I tried a bit too hard in one of the sections where I was more comfortable. I made a mistake that resulted in a spin, in the one place you don’t want to spin. The contact I had, though I was able to continue driving, caused a water leak, so our engine overheated after a couple of laps, and that was the end of our race. It’s obviously a tough blow to our team. We have some work to do with our car in these mixed conditions, and I have some work to do. We’ll keep our eyes on the championship and focus on the last three races of the year.

Jan Heylen
It was a tough weekend. It started off well with a really good qualifying run from Ryan. We had really good speed in the dry. We were lacking some time as a team with this car in the rain. In the end, that’s what it comes down to. We just didn’t have the car underneath us in these conditions. It’s easy to make a small mistake, and that’s all that happened, that’s racing. We’ve made up a lot of points from the beginning of the season, and we’ll do that again in the last three races of the season and see if we can make it back to the front.

PORSCHE CARRERA CUP NORTH AMERICA Presented by The Cayman Islands
In race one, both Max Root and John Goetz had clean and consistent stints, finishing ahead of their starting positions following several instances of pack racing through the four-mile road course. Root finished in sixth, improving his starting position by two spots. John Goetz gained a spot to finish fourth, narrowly missing the final podium spot. Hutton McKenna had one of his strongest performances all year in the No. 88 Porsche, pulling some daring but skilled moves to climb into the top ten from his 13th-place starting position. An unfortunate off-track excursion resulted in the car needing to pit to be assessed for damage, and he was able to continue, finishing in 12th in class.

McKenna showed promise again for race two but contact in the infamous Kink again ruined his prospects, ending his race early. Root again put in a consistent performance on Sunday, finishing in fourth place, just one second behind the final spot on the podium. John Goetz again returned to the podium in the final race, finishing third after starting fourth in class. The Porsche Carrera Cup North America will resume racing during the Porsche SportsCar Together Fest at the Indianapolis Motorsport Speedway, September 9 – 12.

GT AMERICA
Charlie Luck’s effort in SRO America’s new GT America series has been an impressive one all year, with the bronze-rated driver finishing second in both of his races this weekend in Nashville, Tennessee. The Music City Grand Prix held two races for the GT America championship, letting the field of sports cars storm the downtown city streets. After securing a second-place finish in class and third overall on the street course on Saturday, Luck looked to be a strong contender for Sunday’s podium as well. The No. 45 Porsche 911 GT3 R was a victim of contact in the opening of the race, as the field of bronze drivers drove into a narrow turn, hoping to gain position. Though Luck went wide to avoid the bottleneck, another car crashed into him, dropping him down the charts. He was able to continue, and despite a series of cautions, he charged back through the field to earn another second-place finish. The result keeps Luck firmly in the points lead heading into the next event at Road America, August 27-29.

Charlie Luck | No.45 Porsche 911 GT3 R
I had a great weekend overall with two second-place positions in masters, and one third and a seventh-place finish overall. I totally love the Nashville street course and I can’t wait to go back again next year. In race two, we took our bad situation from the first turn and came back from last to finish seventh. Overall, I am very happy with the weekend.