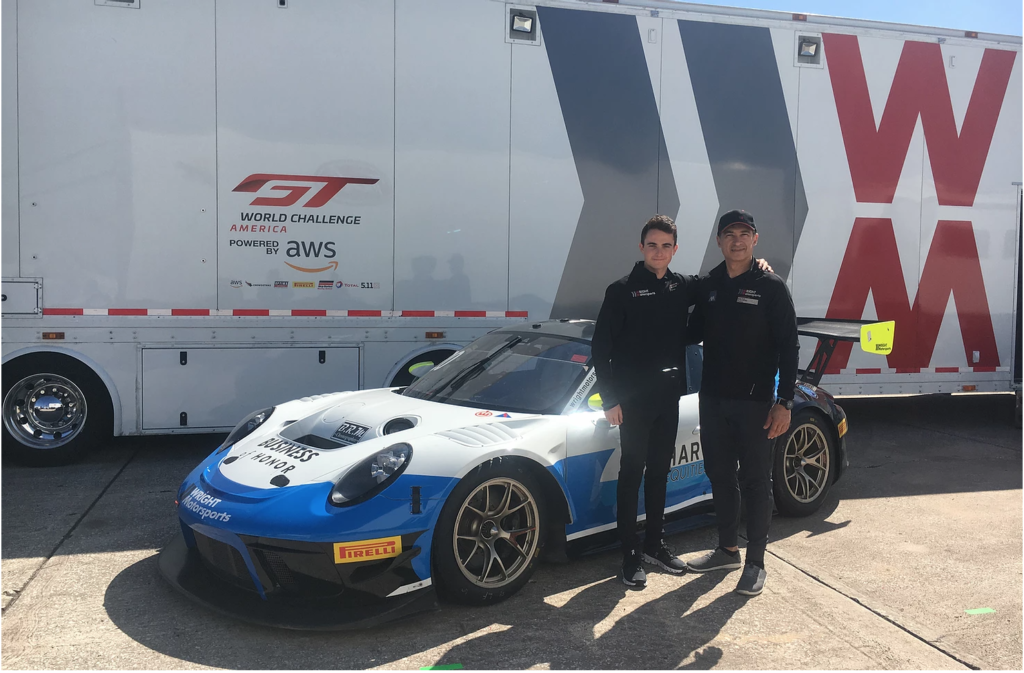 BATAVIA, Ohio, (March 2, 2020) – Wright Motorsports has returned for another season in the GT World Challenge America powered by AWS, beginning with this weekend’s double header at Circuit of the Americas in Austin, Texas. Wright Motorsports drivers Max Root and Fred Poordad are advancing from the Porsche GT3 Cup Challenge USA one-make championship to race in the GT World Challenge America series, entering a Porsche 911 GT3 R in the Am class for the 2020 season.

“We’re proud to be returning for another season with GT World Challenge,” said Team Owner John Wright. “The series will be the perfect environment for Max and Fred to continue to be challenged and grow as drivers against some very competitive entries at some of the best tracks in North America. This will be an exciting season.”

The No. 20 Wright Motorsports Porsche 911 GT3 R is one of 14 cars on the entry list for the season opening double race weekend. With the Pro/Pro class eliminated, the 2020 championship will consist of three classes: Pro/Am, Am and Silver Cup.

This year’s championship will consist of six double header weekends at permanent road courses across North America. The Ohio-based team will run the GT World Challenge America schedule in addition to the 12 events of the IMSA WeatherTech SportsCar Championship, where Wright has two Porsche 911 GT3 R race cars entered between the sprint and endurance championships. Wright is also working on the team’s Porsche GT3 Cup Challenge USA by Yokohama plans, which will be announced at a later date.

“What a crazy few months this has been,” said Team Owner John Wright. “Everyone on our team has been putting in so much work over the last few months, managing all of our various programs. From the Roar Before the 24 and the Rolex 24 at Daytona in the IMSA WeatherTech SportsCar Championship to our GT World Challenge America effort, and for whatever other racing is ahead, we’ve been full speed ahead, ready to make our 20th year of racing one of our strongest yet.”

Each driver will participate in a 15 minute qualifying session to determine their starting position for one of the two races. Driver one will qualify to start race one, and upon completing the minimum drive time during the 90 minute race, he will pit and driver two will take over. Driver two will finish race one, and also complete the first half of race two. Driver one will take over at the halfway point, and finish the race weekend. Qualifying for race one will take place Saturday, March 7 at 9:40AM Central, followed by qualifying for race two at 10:00AM, and will stream live on the GT World Challenge YouTube page. Race one will take place on Saturday at 1:35PM, and race two on Sunday, March 8 at 1:15PM, both of which will also stream live on YouTube.

I am extremely excited to be back with Wright Motorsports for 2020 in the GT World Challenge America championship. After a positive Porsche GT3 Cup Challenge USA season, it’s a great opportunity to be staying with John and Porsche and I’m glad it all came together. Co-driving with standout Masters Cup driver Fred Poordad, our chemistry and communication will aid us nicely as we work together through the six rounds. Austin is one of my favorite cities, and COTA one of my favorite tracks on the calendar, so I’m looking forward to get my midterms over and back to the car!

I am excited to return to Wright Motorsports and sponsor Wealth Management Strategies (WMS) of Equitable, in the SRO GT America World Challenge. I am also thrilled to be running with Max Root as my co-driver. Both of us are coming off of successful seasons in the GT3 Cup Challenge and as newcomers to this series, there will be much to learn in a short period of time. I am looking forward to a successful season as we are willing to put in the hard work required and we have a great team and crew around us.

We are passionate about helping our clients Plan, Protect, and Achieve their wealth. Success doesn’t happen by accident; it takes planning, preparation, and discipline along the way. The greatest endurance athletes in the world live by these principles. We see life as the greatest endurance race of all time – one that we all must run. Our results tomorrow largely depend on our actions today. We want to help you plan for your future, protect your loved ones and your business, and achieve whatever success means to you (WMSassociates.com)