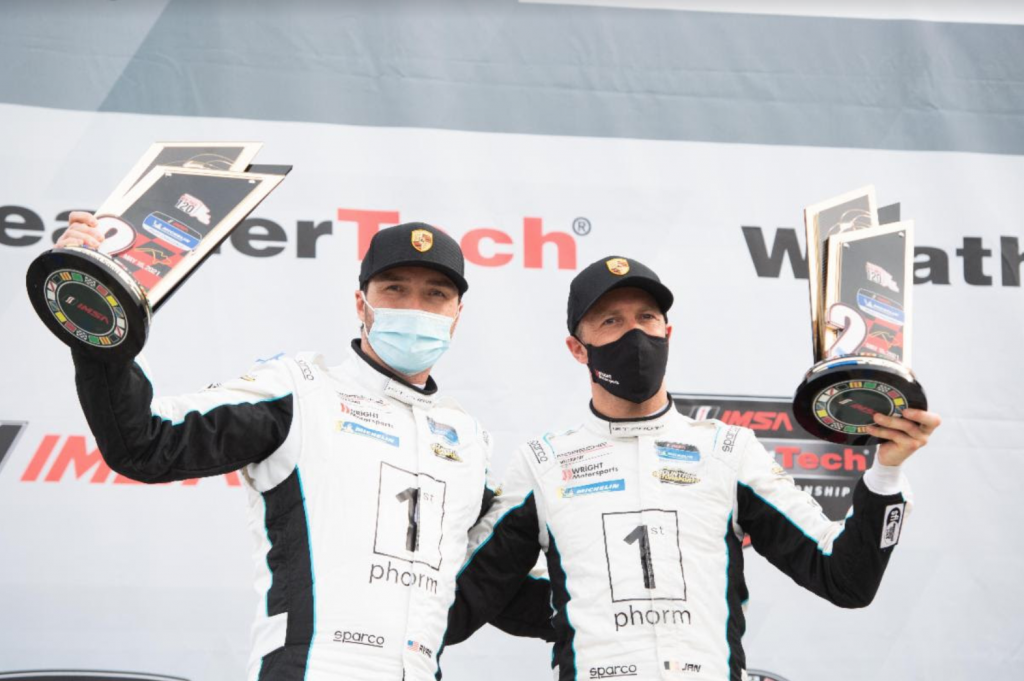 LEXINGTON, Ohio, (May 16, 2021) – Home race week has concluded for Wright Motorsports at Mid-Ohio SportsCar Course, and Wright Motorsports closes out the event with their third podium of the 2021 IMSA season, after earning a second-place finish in the Michelin Pilot Challenge. The team showed strong pace while racing to the podium in the WeatherTech SportsCar Championship race but contact from another car dashed those hopes in the final hour.

Ryan Hardwick came back for his first races since his January on-track incident, fully recovered from his head injury to celebrate a pole position and race podium, creating additional momentum the team will use to launch into the next stretch of the season.

IMSA WeatherTech SportsCar Championship
The No. 16 Porsche 911 GT3 R showed strong speeds in each session, even learning the “points pole” by qualifying first in a pre-race session that gifted 35 points to the 1st Phorm car. Ryan Hardwick started the race in tenth and enjoyed a relatively drama-free stint, settling into position and saving tires and fuel to play into the team’s race strategy. With no issues, he completed his stint in 11th and pitted after completing the minimum drive time. The No. 16 Porsche received a fresh set of tires and a tank of fuel as Patrick Long took over the driving duties. As the rest of the field began to circulate through their stops and varying strategy calls, the race played into Wright’s hands and their consistency paid off. Long moved up to sixth position in a matter of laps, catching Michael de Quesada in the No. 28 Mercedes and Mario Farnbacher in the No. 76 Acura, in a heated battle for fifth place. The No. 76 went temporarily off course and Long assumed the position, closing in on de Quesada to fight for fourth. Lap after lap, the duo raced nose-to-tail, and then as the pair ran side by side into the carousel, the No. 9 Porsche came alongside, running three-wide into the turn. The three had contact, sending the Wright Motorsports spinning into the gravel. Long saved the car from further damage but needed a tow back to pit lane to replace a flat right rear tire. The delay set the team back three laps, resulting in a 12th place finish.

The IMSA WeatherTech SportsCar Championship will resume June 12 at the Detroit Grand Prix at the temporary street course on Belle Isle. The one-hour, 40-minute race will be the shortest race on the 2021 schedule, and include only the DPi, GTLM, and GTD classes, sharing the race weekend with the NTT IndyCar Series.

Ryan Hardwick
What a shame. After not the best qualifying effort, starting towards the back of the field, we worked our way up to the top five, with Pat doing most of the hard work. It’s disappointing for our race to end like that. We’ll take this one on the chin. It’s still a long season. I look forward to bouncing back at Detroit and get on with our winning ways.

Patrick Long
We were biding our time with a car in front of us that seemed to be out of tires and unable to continue at pace. A chain reaction effect of some errors by the leading car meant that we had to check up, and we got hit from behind and broke our right rear wheel. At that point, the race was over for us. We soldiered on and got some points, not giving up. It was not our prettiest race, but it’s eyes up onto our test at Watkins Glen.

Michelin Pilot Challenge
Ryan Hardwick proved to be the comeback king on Friday afternoon in the Michelin Pilot Challenge qualifying session, securing pole position by 0.441 seconds over the No. 13 McLaren 570S GT4 of Chris Green. Side by side, the pair led the field to green, with Hardwick holding position and resisting pressure from an eager Green. Knowing fuel strategy would play a large role in the race, the team encouraged Hardwick to hit specific fuel numbers with every lap, hoping to save time in pit lane during the two-hour. Green took the lead for several laps before making an early stop for fuel allowing Hardwick to resume his run at the front of the field. After 50 minutes, the No. 16 Porsche Cayman GT4 Clubsport became one of the first cars to pit for tires, fuel, and a driver change. Jan Heylen took over from Hardwick, rejoining in 15th overall. A full-course caution came out, and a majority of the field came in for their first stops. The No. 16 Porsche also pitted, only needing a splash, exiting pit lane ahead of the field. Heylen rejoined in third, behind the No. 46 Camaro and No. 83 Audi.

The race went back to green with 52 minutes remaining, and the battle for first intensified. The top three positions played musical chairs, with Heylen moving up to second place behind the No. 13 McLaren with 15 minutes remaining, and then the two cars fighting for third had contact with each other. The McLaren pulled away on the straights to create a 1.1-second gap, but expert maneuvering by Heylen in the Porsche eliminate the gap and produced a nail-biting nose-to-tail battle for the checkered flag. In the end, Heylen and Hardwick finished second, earning the team’s second podium in two races in the Michelin Pilot Challenge. The successful finish moves Wright Motorsports up from 15th to seventh in the team points, giving the team great momentum after missing the first race of the season. The Tioga Downs Casino Resort 240 June 24-27 is next up, kicking off back-to-back weekends at Watkins Glen International in upstate New York.

Ryan Hardwick
Wow! What a fun race, and what a great way to come back after my injury in Daytona. Getting the pole position was something I’ll remember for the rest of my life. That was an unbelievable lap. It was a fun race at the start, but I just did not have the pace of that McLaren. So I settled into second and just tried to take care of the car and give the car Jan in a good condition for him to be able to make a push. If the race went for a couple more laps, I think it may have been a different outcome. But it was a great race. A lot of good points for our team in the championship and right yeah, I’m really looking forward to the rest of the season in this class.

Jan Heylen
That was a super fun race. I really enjoyed that. Ryan did a really good job on that first stint. All the way down to those last five laps or so it was a fuel race. So Ryan did a good job keeping the pace and saving a bit of fuel. Then we were on a slightly different strategy than the McLaren. Our strategy was right, that McLaren was just a little too fast for us on the straightaways today. Apart from that, it was just an awesome weekend, super fun out there racing with these guys. I really enjoyed it, and it was good points for the championship. It should put us in the hunt going into the next one.