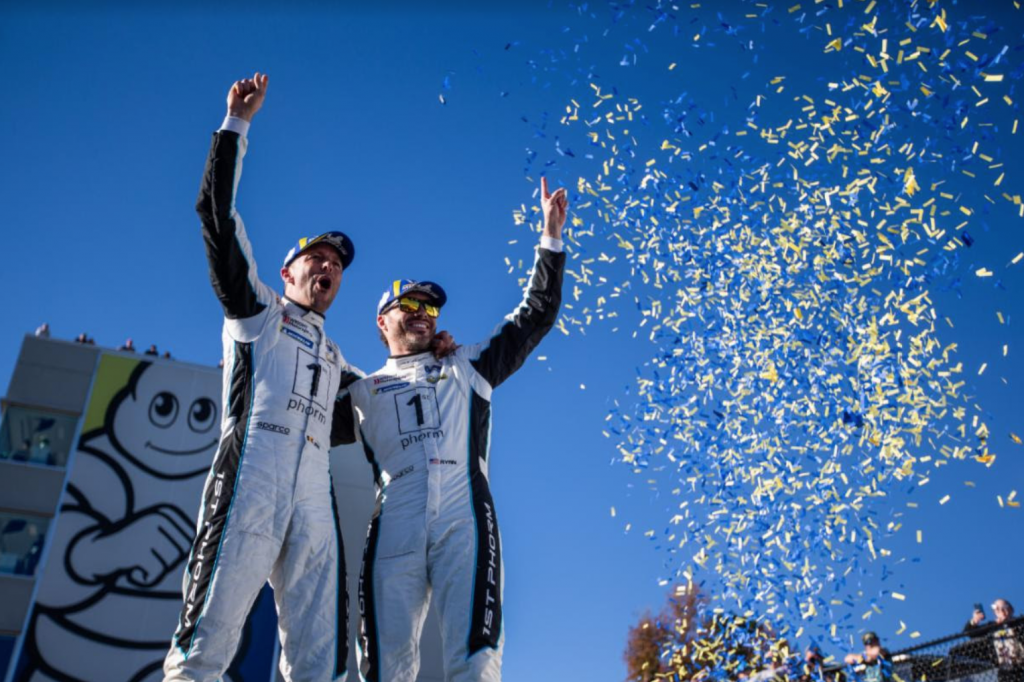 BRASELTON, Ga., (November 12, 2021) – Wright Motorsports earned a third championship this season on Friday at Michelin Raceway Road Atlanta after a race win by Ryan Hardwick and Jan Heylen in the Michelin Pilot Challenge. The pair, supported by their full-season crew, drove a strong race in the Fox Factory 120 to claim their third consecutive victory, becoming the 2021 Team and Driver Champions.

“This has been an incredible season for Wright Motorsport in the Michelin Pilot Challenge,” said Team Owner John Wright. “No matter what was thrown at us this year, we just stayed focused on consistency and execution. This is the end result of that commitment by every member of Wright Motorsports, Ryan, Jan, Max, and everyone at Porsche. We’re grateful to have partners like Porsche Motorsport North America, 1st Phorm, Mountain Motorsports, and Una Vida Tequila for being a part of our program. Each and every person in our program was a part of our success today.”

Following an on-track incident during practice at the beginning of the season at Daytona International Speedway, the Wright Motorsports No. 16 Porsche 718 Cayman GT4 Clubsport started the 2021 season by missing the opening race. Undeterred, the team came back with force, taking a second-place finish in round two at Sebring International Raceway, with Max Root stepping in for Ryan Hardwick. From there, Hardwick and Heylen earned three additional podiums, rocketing the team up the point standings and placing themselves in contention for the championship. Root would sub for Hardwick again later in the season, stepping in at WeatherTech Raceway Laguna Seca, where he and Heylen earned the effort’s first win of the season. The momentum built from there, and Hardwick and Heylen at last celebrated their first win as a pair at WeatherTech Raceway Laguna Seca, getting that much closer to Turner Motorsports, the points leaders.

Hardwick qualified the No. 16 Porsche in fourth for the season finale at Road Atlanta and slipped into fifth as the field roared into turn one. Knowing that smooth driving and consistent laps would pay off throughout the race, Hardwick kept the car clean and in a competitive position, climbing back to fourth, several positions ahead of the No. 95 Turner Motorsports BMW. An early full-course caution brought Hardwick in for a splash of fuel and a new left rear tire. The BMW pitted in the same window, and lost a handful of positions due to trouble in their pit stop, dropping down to 19th. Hardwick finished his stint under another caution, pitting from ninth as Heylen took over. The Porsche rejoined the race in 10th, with the No. 95 jumping up to fourth place. With Bill Auberlen at the wheel, the BMW only needed to finish ahead of the Wright Porsche.

The lengthy caution played into the heads of both championship competitors, who would have likely had to pit one more time, but were able to save sufficient fuel during the yellow laps. With 51 minutes remaining, the race went back to green, and Heylen started to climb up through the charts, passing the MIA McLaren, then taking advantage of another competitor’s drive through penalty.

Yet another caution interrupted the race, and the Wright Porsche restarted in third place behind the No. 95 BMW of Bill Auberlen. Tensions escalated as the race went back to green, and with 25 minutes remaining, the two leading cars traded paint as they raced through the corners, sending both cars careening off course. Heylen immediately assumed the lead and drove to the checker flag, not giving the rearview mirror so much as a glance. Cheers abounded in pit lane as the team, who started the race season by missing the first race, came back to become champions in their first Michelin Pilot Challenge championship.

Ryan Hardwick
It is hard to put into words what I am feeling right now. To even have an opportunity to race for a championship is something that most people never have. To ultimately win it, at my hometown track, is hard to describe. It came down to our team yet again; Wright Motorsports. We pulled off a sensational strategy. The car was absolutely perfect. Jan Heylen is a warrior. He is a deserving driver champion. We thank all the support from 1st Phorm, we wouldn’t be here without all the great people and family at 1st Phorm. Porsche put a huge trust in us to run this car in its final year. I have to thank Max Root for filling-in for me two times during the year. Without him, we wouldn’t be in this position either.

Jan Heylen
It has been an unbelievable season with this team in all series. Big thank you to Ryan Hardwick, to Porsche, to Wright Motorsports for putting this program together at the beginning of the season. It has been a super fun season, a few ups and downs but just really good hard racing and that is what we love doing. Definitely could not have done it without the team. They just come through every time. I couldn’t be happier for everyone involved, all the partners, 1st Phorm. It is just an unbelievable day. For it to be here, at Ryan’s home track, just makes it extra sweet. Another thank you also goes to Max Root for his contributions this season. He’s definitely a part of this win too.