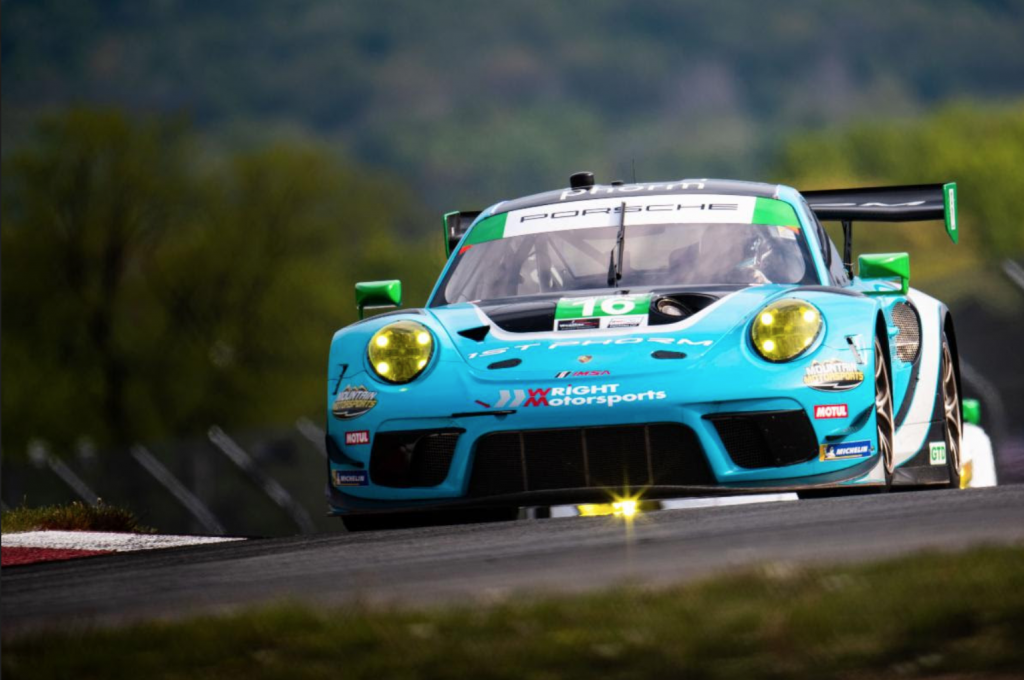 BATAVIA, Ohio. (October 5, 2021) – Wright Motorsports is Virginia bound for the final IMSA WeatherTech SportsCar Championship sprint race of the year, the Michelin GT Challenge at VIR. Wright Motorsports will participate in the weekend with a three-series effort, racing in WeatherTech, the Michelin Pilot Challenge, and Porsche Carrera Cup North America Presented by the Cayman Islands.

“It has been a long season, but each of our programs has been doing a phenomenal job,” said Team Owner John Wright. “VIRginia International Raceway is one of our favorite tracks to visit, so we’re excited to be back racing here for the second time this year. We’re looking forward to a strong points weekend, keeping our Wright Motorsports Porsches on the podium.”

IMSA WeatherTech SportsCar Championship
Before the WeatherTech teams battle out for ten hours next month in Petit Le Mans at Michelin Raceway Road Atlanta, the GTLM and GTD classes will compete in this weekend’s two-hour and 40-minute sprint race. Entering the event, nine drivers, including Patrick Long, remain in contention for the GTD drivers’ championship, while Wright and four other programs are eligible for the 2021 team title. With three consecutive podium finishes, the drivers and crew of the No. 16 Porsche 911 GT3 R have a strong momentum headed into VIR, aiming to clinch their first victory of the 2021 championship.

With high-speed corners and long straightaways, VIRginia International Raceway always delivers exciting racing for the two WeatherTech GT classes (GTLM and GTD). Though the race may be short, the action will be sure to be exhilarating. Fans can tune in to imsa.tv to watch the Michelin GT Challenge at VIR live onboard from the Wright Motorsports Porsche, as well as tune in to NBC for the official race broadcast. The green flag will drop on Saturday, October 9 at 12:00 PM Eastern.

Patrick Long
No. 16 Wright Motorsports Porsche 911 GT3 R
I am looking forward to being back at one of the most pure and unique circuits on the IMSA calendar. It’s a technical track for the driver and engineer to dial the car in, and tricky to pass on! The GT only formula will lend a different tempo to the race, and I expect a very sprint-natured two-hour and 40-minutes. I am so proud of the effort this team has been putting out all season, and I can’t wait to get back out there and to continue the charge toward more podiums.

Trent Hindman
No. 16 Wright Motorsports Porsche 911 GT3 R
Name me a driver that doesn’t look forward to running at VIR every year? I don’t think that person exists. Most of the old-school racetracks in North America are high speed and even higher commitment, but VIR takes it to another level in every aspect. All drivers love a racetrack where fortune still favors the brave.

Michelin Pilot Challenge
After an incredibly successful weekend at WeatherTech Raceway Laguna Seca last month, where the No. 16 Porsche 718 Cayman GT4 Clubsport won from pole position, Wright Motorsports remains close in the GS driver and team championship hunt with two races remaining. With three pole positions, five podiums, and one win, consistency has been the name of the game for the team’s GS effort, and the team will bring its best game to the Alton, Virginia circuit to keep gaining in the points battle.

For the one and only time this year, the Michelin Pilot Challenge competitors will race after the headlining series, with the Virginia Is for Racing Lovers Grand Prix beginning on Sunday, October 10 at 2:10 PM Eastern, airing live on NBC Sports Network’s TRACKPASS streaming app.

Ryan Hardwick
No. 16 Porsche 718 Cayman GT4 Clubsport
VIR is one of my absolute favorite tracks on the IMSA schedule! My favorite part of the track is the uphill esses, in particular, turn nine. That corner is so tough to get right when you carry a lot of speed through the esses on the way up, and when you crest the top of turn nine, it’s very tempting to back out of the throttle which really hurts all your momentum. That’s always a tough corner to get just right. I have some great memories of racing at VIR and have been fortunate to win several races here. This year’s event will be a very important race in our quest for the Michelin Pilot Challenge series championship. With only two rounds remaining, we are aiming to get another win to keep our momentum going strong.

Jan Heylen
No. 16 Porsche 718 Cayman GT4 Clubsport
Wright Motorsports has had some great success at VIR in all series. We all love going to VIR. The big thing is the people. That is why we love going there. It is always a friendly environment. They do a great job of putting the event together and making everyone feel at home. That really separates VIR from some other places. It has to be at the very top of everybody’s list as a driver’s track. It is an old-school track with a little bit of everything: long straightaways, high-speed corners, good places to overtake. It has it all. It has always been a lot of fun with good action. The track promotes overtaking. We have two championships we are in the running for, so VIR is going to be a big race for us in both the Michelin Pilot Challenge as well as in WeatherTech GTD.