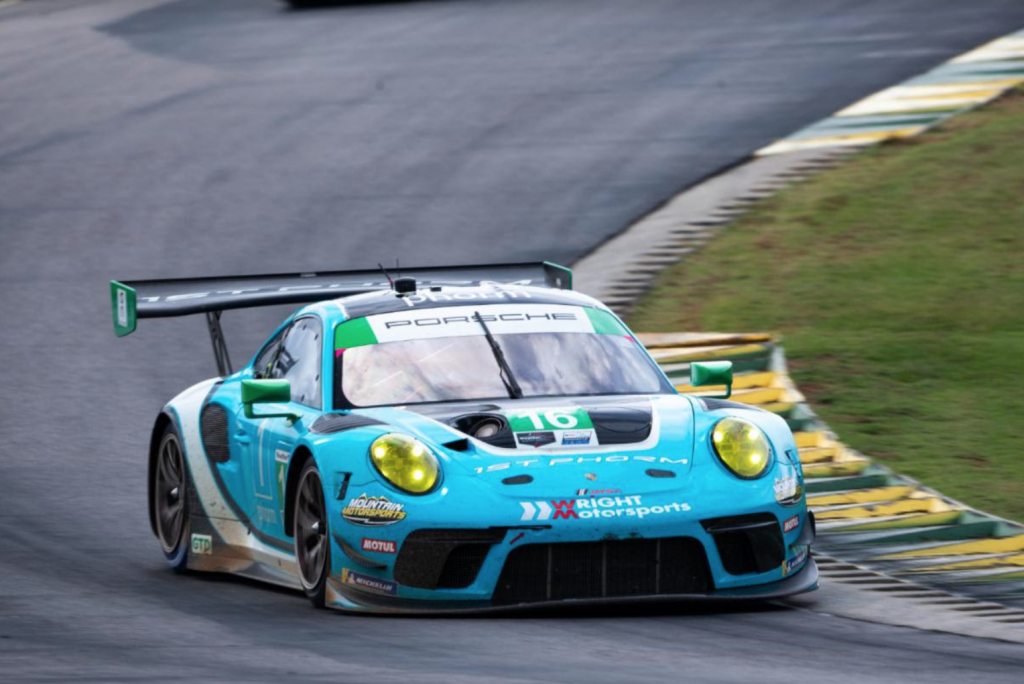 ALTON, Vir., (October 10, 2021) – Wright Motorsports had a successful visit to VIRginia International Raceway (VIR) over the weekend, driving the pair of No. 16 Porsche race cars to strong finishes in each respective series and gaining valuable ground with one race weekend remaining in the 2021 season. The team gained one spot on Saturday in the 2021 IMSA WeatherTech SportsCar Championship GTD class point standings following a fourth-place finish in the Michelin GT Challenge at VIR with Trent Hindman and Patrick Long. In Michelin Pilot Challenge, the team drove to victory with Ryan Hardwick and Jan Heylen, jumping to second-place the point standings.

“What a weekend,” said Team Owner John Wright. “We knew VIR would deliver some great racing, and we put up some strong fights to make sure we came out ahead, battling for every championship point. Our GT3 and GT4 programs made some great strides this weekend in the points, and we’re all looking forward to getting to Michelin Raceway Road Atlanta to give these championships one final push!”

IMSA WeatherTech SportsCar Championship
An off-track excursion in qualifying potentially led to splitter damage, and the No. 16 Porsche 911GT3 R was disqualified for improper ride height. The penalty moved Trent Hindman to start from the 14th position in the GTD class instead of his original third-place qualifying position. At the drop of the green flag, Hindman charged forward, passing four cars in the first ten minutes to break into the top ten. Racing behind the No. 9 Pfaff Porsche, the pair moved their way up through the field, with Hindman closing the gap between the two with every lap. The battle for position went four-wide as Hindman and the Porsche came up on the No. 14 Lexus and No. 66 Acura, who were racing side by side. As the Lexus and Acura traded paint, the Pfaff Porsche went left and alongside the pair with Hindman close on its bumper. The pair made it through, gaining more track position in the opening stint. As Hindman pushed from fifth position, a lapped car exiting pit lane made contact with the Wright Porsche, sending Hindman off in turn one. He recovered and pitted in the next lap, allowing the team to inspect the car and give the driver from New Jersey the next round of service before rejoining.

He re-entered the race in ninth, determined to gain back the ground previously lost. He acquired two more positions before closing out his stint, giving the 1st Phorm Porsche 911 GT3 R to Patrick Long under full-course caution. He restarted from ninth, digging in to make the most of the final laps. He pitted for a quick splash of fuel to get the car to the finish, gaining some ground in pit lane over the competition. With 20 minutes to go, the Wright Motorsports Porsche had climbed up to fourth-place, reeling in Bryan Sellers in the No. 1 Lamborghini. In the final 15-minutes, the race-leading BMW had contact with a GTLM Corvette, sending the car spinning and eventually limping back to pit lane. With two laps to go, the No. 14 Lexus of Jack Hawksworth sat behind Long, attempting to find a place to pass before the checker flag. Long held the position, but interference from a GTLM car opened the door for the Lexus, passing the Porsche in the final lap. Wright finished in fourth-place, gaining a spot on the GTD driver and team championship standings. They are currently placed third with one race remaining.

Championships will be determined after ten hours of racing at Michelin Raceway Road Atlanta’s Petit Le Mans, November 10-13. Wright Motorsports will enter the event with a three-driver lineup to be announced at a later date.

Patrick Long
That was an extreme high and low sporting event. There was a great execution of strategy and pit stops by the Wright Motorsports team with a really tough starting scenario. There was a lot of traffic for Trent and myself. Two key events cost us a top-two finish today. First, getting taken out by a lap-down car coming out of the pits early in the race. We fought back and made it up to a podium position and on the last lap, unfortunately, as a GTLM car was coming through, opened the door to the car behind us and we got run over and had to settle in a battle to even hold onto fourth place. I am proud of the team but frustrated with the result. You can only control what is in your control.

Trent Hindman
Once again this was one that got away from us, and it was completely out of our control. We had a great qualifying but unfortunately got moved to the back. That didn’t seem to affect us much. The car was super good in traffic, and we were able to move our way forward in the first stint. At the very end of the first stint, we had contact that set us back down the order. It was a big fight to move back forward from then on. A big thanks to the Wright team, 1st Phorm, Mountain Motorsports, obviously Ryan Hardwick for making everything happen, and Pat for his excellent drive. It stings a little bit because we have all the speed in the world, and we have the potential, but we just aren’t getting it done. I feel for the whole team.

Michelin Pilot Challenge
Feeling good after two strong practice sessions, the team of the No. 16 Porsche 718 Cayman GT4 Clubsport had high hopes for Sunday morning’s qualifying session. Ryan Hardwick was sitting in sixth-place, working on a flying lap when a competitor’s crash brought out a red flag, dashing all hopes of bettering his starting position. Still confident, the team rallied for the afternoon’s green flag for the Virginia is for Racing Lovers Grand Prix. Hardwick slid into seventh on the start, getting held up for the first half of his stint by a slower McLaren. As soon as he made the pass for sixth-place, he pulled away, eager to regain any lost ground by the end of his stint. With one hour, 17 minutes remaining, The No. 16 Porsche pitted for fuel, tires, and a driver change to Jan Heylen. Heylen rejoined in seventh, with two cars ahead who had yet to pit. A crash brought out a full-course caution, and the team made the call to have the Porsche pit for a quick splash of fuel with one hour to go.

With only a small selection of teams following suit while under caution, the name of the game for Wright Motorsports became fuel saving. Heylen restarted from eighth with 51 minutes remaining, making his way up to fifth before the next full course yellow. With every lap, the team’s radio was in constant communication, with Heylen reporting his latest fuel consumption numbers and the pit box telling him what his goals should be. Two more cars pitted under caution, moving Heylen up to third place behind Stevan McAleer and Tyler McQuarrie. Never content with a podium when more is possible, with the waving of the green flag, Heylen made a smooth pass on McQuarrie and immediately put pressure on McAleer, who was potentially short on fuel. The team’s main championship contender, the BMW of Bill Auberlen fell back early in the race, but was able to gain lost ground, joining the fight for the top-three positions. Heylen made the pass on McAleer for the lead, and ran to the checker flag, securing the team’s second Michelin Pilot Challenge victory in two races (the first coming at WeatherTech Raceway Laguna Seca). With the BMW finishing fourth, Wright Motorsports eliminated 60 of the 80 point gap that separated the team from the GS class championship leaders. However, following the post-race technical inspection, the second-place car received a penalty, returning 20 points back to the BMW who was moved to the runner-up spot.

At the season finale at Michelin Raceway Road Atlanta, Wright Motorsports will need to secure victory or finish two spots ahead of the BMW in order to clinch the 2021 team and driver championships. The Fox Factory 120, a two-hour sprint race to the championship title, will take place Friday, November 12 at 1:00PM Eastern, airing live on NBC Sports Gold’s TRACKPASS app.

Ryan Hardwick
You could never ask for more than to be able to come down to the final race and be competing with another great team for the championship. Nothing else has to come into play: the championship will come down to whichever team crosses the finish line first. There’s a ten-point difference with the Turner car in the lead. We don’t need any more cars between us, it’s just whichever car crosses the line at Road Atlanta will win. That’s an awesome position for both of us to be in. We’ve enjoyed racing against them, and I’m sure the feeling is mutual. This is my first year racing in this class, and all year, the racing has been so tight and so fun. There’s so much strategy involved and it’s cool to be in this position. With Road Atlanta being my home track, I’m pretty excited to close out the season in my backyard. The Porsche really came to us in the end, and I’m so glad we were able to celebrate back-to-back wins with the No. 16 1st Phorm Porsche.

Jan Heylen
The pass for the lead was all about understanding the situation around us as far as fuel strategy, and which strategy each car was on. The key was to be patient. I didn’t think at the start of the stint that we had the pace to be up front, but then I went into fuel and tire save mode, and very quickly after that I could feel that we got stronger than the cars around us. From there, I tried to set up Stevan McAleer and fake a few passes. When I felt it was the right time, it was easy to get by him. It was a super fun race. I loved every minute of it. There was an amazing strategy by the team. We could never have made it without the call the Wright team made early on. Good job to the team and Ryan Hardwick for driving an excellent stint. I was nervous about the fuel, even though the team was telling me: ‘we’re good’. There was no need to risk everything to try to make a big gap, so I just continued to save to make it to the end. The Porsche had really good speed today, and it took us right there to the end to celebrate in victory circle.

PORSCHE CARRERA CUP NORTH AMERICA Presented by The Cayman Islands
The trio of Wright Motorsports Porsche 911 GT3 Cup race cars gained ample track time in various conditions at VIRginia International Raceway, dealing with vast amounts of traffic in both of the 45-minute races. While the congestion on track limited the progress of the three Wright Porsches in Race One, Max Root, John Goetz, and Hutton McKenna were able to set fast laps to better their starting positions for Race Two. Though Goetz and McKenna fought for track position and made gains in the second race of the weekend, Max Root closed out the weekend leading the team pack, with a fourth-place finish.

The Porsche Carrera Cup North America presented by the Cayman Islands checkers the 2021 season at Road Atlanta on Petit Le Mans weekend, finishing the year with a triple header, November 10-12.