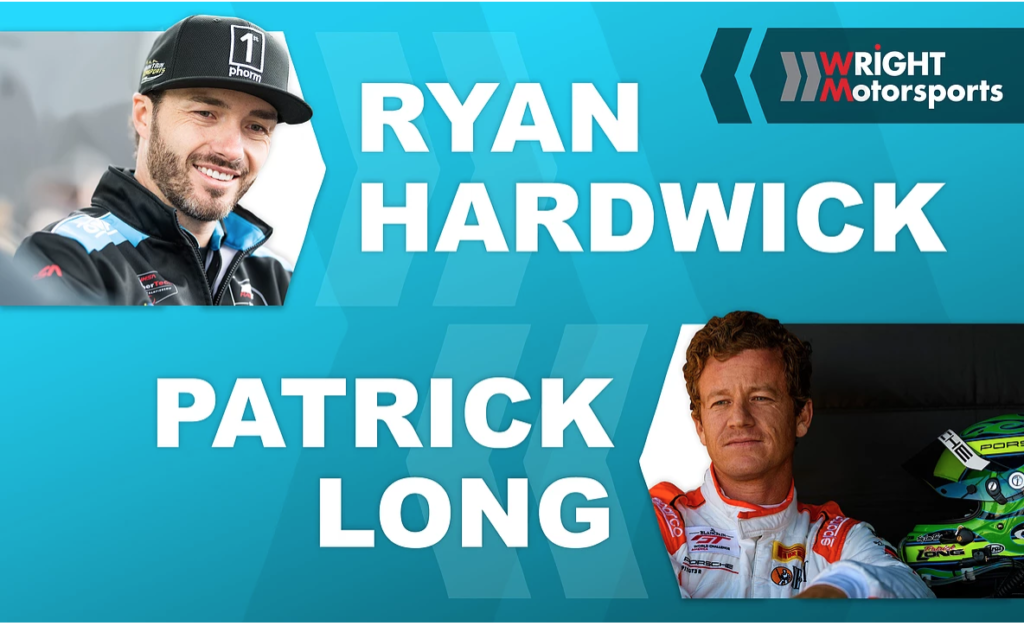 BATAVIA, Ohio, (December 7, 2019) – As 2019 draws to a close, Wright Motorsports is charging into the 2020 sports car racing season at full speed, announcing a two car return to the IMSA WeatherTech SportsCar Championship. Wright Motorsports newcomer Ryan Hardwick and Porsche Factory driver Patrick Long will be the full season drivers of the No. 16 Porsche 911 GT3 R, sponsored by leading sports nutrition company 1st Phorm and motorcycle and powersports retailer Mountain Motorsports. The 2020 IMSA WeatherTech SportsCar Championship will begin in January with the Roar Before the 24 and the Rolex 24 at Daytona.

Fresh off his rookie season in the IMSA WeatherTech SportsCar Championship, the 2020 season will see Hardwick return to the GTD class in the IMSA WeatherTech Championship. Announced in October, the 2018 Super Trofeo and SRO America GT Cup champion will bring 1st Phorm and Mountain Motorsports to the Wright program and the No. 16 Porsche 911 GT3 R.

“I am literally counting down the days until the green flag waves at the Rolex 24 in Daytona,” said an eager Hardwick. “I couldn’t be more excited about how things came together during the off season with Wright Motorsports and Porsche Motorsport North America. This team is truly where I belong. I immediately felt comfortable and right at home with these guys. I’m also super stoked to have the opportunity to share the driver seat this season with Patrick Long. As a long time Porsche enthusiast, I’ve been a fan and watched Pat compete for years. Getting the chance to actually race alongside and learn directly from him, is a real honor. Daytona can’t come soon enough. I’m ready to get after it!”

Returning to Wright Motorsports for another year of competition, Patrick Long will continue to race with the fan favorite Porsche team. The three-time ALMS GT champion also holds three Pirelli World Challenge titles, and currently has an impressive 27 wins in IMSA, placing him in the top 25 of over 1,000 drivers to earn at least one victory in the series over the years. Long’s impressive resume, combined with his longstanding relationship with team owner John Wright will give the team a strong upper hand against the rest of the competition in the GTD class.

“We know the model of consistency gets you in championship contention, but sheer performance and victories are likely going to have the final say,” said Long. “I revel the chance to mount a challenge for a title, but I have no doubt we are in the most competitive era of GT racing this country has ever seen. I really like where we ended up in 2018 with Wright Motorsports in IMSA with our GTD effort. It’s great to get back into the groove and the plan is to pick up where we left off. Ryan is a refreshing personality and he seems as driven and focused as any driver on the grid, pro or not. That’s a great combination and I like where we have been able to get as teammates in a very short span of time. I am grateful to our partners in believing in our combination of a driving pair.”

The No. 16 Porsche will feature a predominately black, blue, and grey livery, with the traditional Wright Motorsports chevron showcasing the flowing design of the 550 horsepower rear-engine machine. The distinctive 1st Phorm blue will set the car apart from the field through the duration of the twelve race season.

One of four classes in the IMSA WeatherTech SportsCar Championship, the GTD class will race the full 2020 calendar, visiting the best race courses North America has to offer. The No. 16 Porsche will compete in four endurance rounds: The Rolex 24 At Daytona, the Mobil 1 Twelve Hours of Sebring Presented by Advance Auto Parts, the Sahlen’s Six Hours of the Glen and Motul Petit Le Mans. The additional drivers for the Michelin Endurance Cup events will be announced at a later date. The remaining eight rounds will be comprised of shorter sprint races, where Hardwick and Long will be the only drivers to share the wheel during the race. The season will officially begin January 23-26 with the Rolex 24 At Daytona, the longest event on the 2020 schedule. For more information, visit wrightmotorsports.com and imsa.com.

1st Phorm is a sports nutrition company based in St. Louis, MO. In 2009, CEO Andy Frisella and his business partner Chris Klein started the brand, and since then, it has become the fastest growing supplement company in the world. 1st Phorm has set the standards in the industry for quality and helping people reach their goals. This new racing partnership is not their first time in the exotic car scene either. 1st Phorm has been the title sponsor for the Gold Rush Rally for six years running. With over a million followers across social media, 1st Phorm has amassed a huge cult-like following known as, “The Legion of Boom.” They stand for a movement in the fitness world. To turn it back to what it was meant to be. Helping others improve their lives, to be a good human… and to drop the excuses and do the work. 1st Phorm is a winning brand and they don’t expect anything less when it comes to their race team. For additional info: www.1stphorm.com

Mountain Motorsports is a group of motorcycle and powersports dealerships with multiple locations in the southeastern United States. The company was founded by lifelong friends Ryan Hardwick and Justin Price when they opened their first location as a single-line Honda dealership in Sevierville, Tennessee in 1999. The company has since grown into one of the largest retailers of motorcycle and powersports vehicles in the nation, spanning eight dealership locations representing eleven of the industry’s most well-known brands. For additional info: www.mtn-motorsports.com

Wright Motorsports is the premier Porsche race engineering facility in Ohio and a multi-series, international racing team known for superb car preparation, expert race strategy and driver development. Located in Batavia, Ohio, it is owned and directed by John Wright, a certified Porsche factory-trained technician. As a crew chief John Wright has played a key role in winning eight driver and seven team championships in World Challenge, IMSA (ALMS) and the Grand-Am Rolex Series. Wright Motorsports won the team championship in Porsche GT3 Cup USA in 2012, 2013 and 2015, and went on to win the Pirelli World Challenge Overall, Sprint, Team and Manufacturer’s titles in 2017. The 2020 season will see the team return to IMSA Weathertech SportsCar Championship. For more information, visit wrightmotorsports.com