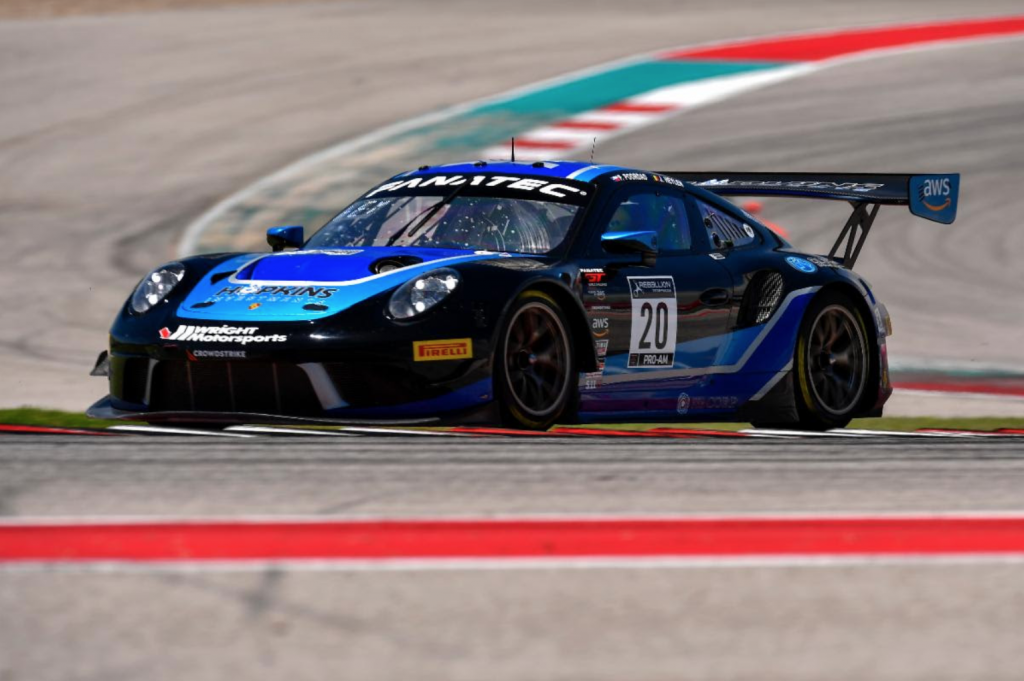 ALTON, Vir. (June 1, 2021) – This weekend, the 2021 Fanatec GT World Challenge America and GT America series will return to VIRginia International Raceway, and Wright Motorsports storms into the wet weekend with the points lead in both championships. With a podium finish in all eight SRO America-sanctioned races that have taken place so far this year, the Porsche customer racing team has started off the season with strong and consistent execution.

The weekend will be an exciting one, as not only are the series offering free admission to active-duty service members and 50% off to veterans but fans will again be allowed in the paddock for the first time since spring 2020.

Fanatec GT World Challenge America
After moving up from the Am to the Pro/Am class for the new season, Fred Poordad, Jan Heylen, and the crew of the No. 20 Porsche 911 GT3 R are on a roll this year in the GT World Challenge America series, currently on a four-straight podium streak that started at the season opener at Sonoma Raceway. Their Pro/Am combination makes for a strong driver lineup, as evidenced by their on-track success in the first half of the season. The pair also hold one overall podium from the opening race, and after a recent two-day test earlier last month, look to be strong contenders in the highly competitive Pro/Am class. The No. 20 Wright Motorsports Porsche holds a seven-point lead over the No. 04 Mercedes AMG GT3 of George Kurtz and Colin Braun, lining the competitors up for an exciting weekend battle for coveted championship positions. Sixteen cars are set to compete across the three classes: Pro, Pro/Am, and Am, and with rain in the predicted forecast all four days that the series is present, the on-track action will be sure to deliver excitement for the fans in attendance. Poordad and Heylen will have two opportunities to score extra championship points, with a race each on Saturday and Sunday, June 5 and 6, respectively. Each driver will get a turn to compete in the 90-minute doubleheaders, each starting one race and finishing the other.

Fred Poordad
I am looking forward to getting back to racing at VIR. That is a great track, technical and fast, and set in beautiful rolling hills. We are looking to come out strong and set the tone for the rest of the season before our summer break. Should be fun!

Jan Heylen
I’m looking forward to race at what has to be one of the most fun tracks on the schedule! It is a great facility with great people running it, so we all enjoy going to VIR. Our goal is to extend our points lead and hopefully we can do so by scoring another podium finish. We’re well prepared after a productive two-day test earlier this month. The car felt the best it has felt all year and Fred is more and more comfortable in the car as well.

GT America Powered by AWS
This weekend’s festivities at VIRginia International Raceway are special for Charlie Luck whose hometown is Richmond, Virginia. Luck continues to also lead the championship in his class, with a 30-point lead over Jeff Burton of Rearden Racing. With three wins in four races, Luck’s debut in the new GT America series has been nothing short of impressive, moving up from a Porsche one-make competition to race the No. 45 Porsche 911 GT3 R in the series made for only bronze rated drivers. In the previous round at Circuit of the Americas, luck battled in both wet and dry conditions to earn a second and first-place finish in Austin, Texas, continuing his podium streak into his home race at VIRginia International Raceway. This weekend, he’ll have two 40-minute races between Saturday and Sunday, competing against 23 other cars.

Charlie Luck
I’m looking forward to VIR. This is a home track for me and we have a lot of laps on the track, going back to four years of Cup racing, plus testing with Jan and the 911 GT3 R. It’s a very technical track, and a track that requires a lot of precision and a lot of focus and execution as a driver. I’m looking forward to it.

All qualifying and race sessions will stream live on YouTube.com/GTWorld, and live timing will be available via TSL.