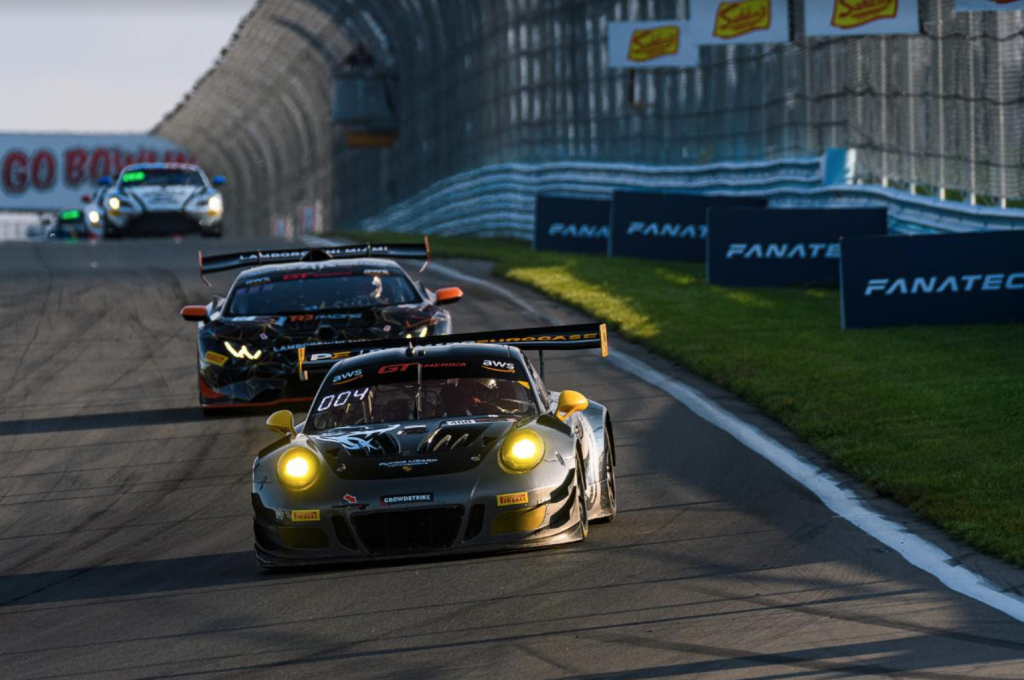 WATKINS GLEN, N.Y. (September 20, 2021) – Flying Lizard Motorsports returned to the podium at Watkins Glen International once again this weekend, following a standout performance from driver Andy Wilzoch in the No. 460 Porsche 911 GT3 R in GT America powered by AWS. Wilzoch, who has recently returned to the series to finish out the season, earned two podium finishes after two exciting races in Upstate New York.

Due to oil on the track during practice sessions one and two, Friday left Wilzoch and the crew with little data and set-up feedback for Saturday qualifying preparation. Great teamwork had the car performing strongly and Wilzoch earn a third-place starting position for race one. Soon after the green flag dropped, a battle developed between the No. 88 and No. 191 Lamborghinis ahead of the Porsche. Wilzoch attacked the first half of the race closing the gap to this battle aligning him to overtake out-of-class Jason Harward in the No. 88 just before entering a full course yellow. With the field now stacked, the lapped GT4 cars mixed in with the front runners, making the restart strategy aggressive. With only three and a half minutes remaining as the race returned to green, Wilzoch and Harward exchanged positions again and the Flying Lizard Porsche took the checkered flag securing a spot on the podium of third in the Masters class.

Wilzoch’s second-fastest race lap on Saturday set the tone for Sunday’s race two battle, placing Wilzoch to start second overall. In lap one, Jeff Burton in the No. 191 Lamborghini took the inside of turn one exchanging positions with the Lizard Porsche. With a comfortable gap ahead of the rest of the field, the three leaders battled with tight and consistent lap times. Homed in on Charlie Luck in the No. 45 Porsche, Wilzoch was able to make the pass reclaiming second place just before the front runners began lapping the back of the pack. The slower traffic did not play into Wilzoch’s favor and he was unable to stretch the gap from Luck in third as far as he wanted. With just one lap remaining, Wilzoch and Luck went side-by-side through turn nine. Contact was made between the two Porsches and Wilzoch recovered to finish the race third in class.

Driver Quote
Andy Wilzoch | No. 460 Porsche 911 GT3 R
I wish we could have had more track time this weekend, but despite the limited practice, everyone at Flying Lizard did a great job giving me a strong car for the two races. It was great to be back on the podium after some intense battles out there. I’m looking forward to Sebring and getting even more track time before the season comes to a close.

The team also had a successful weekend at Utah Motorsport Campus for the latest rounds of the Yokohama Drivers Cup with drivers Chris Bellomo and Mike Gaulke. Both drivers entered the weekend leading their respective championships, and extended their points leads with further on-track success. Bellomo won two out of his three races in the Platinum class, racing his Porsche GT3 Cup Car, and Gaulke had a weekend sweep in his Porsche Cayman GT4, winning all three races in the Silver class. The final event of the season will take place at Flying Lizard’s home track, Sonoma Raceway, October 15-17. For more information, visit competentmotorsport.com.