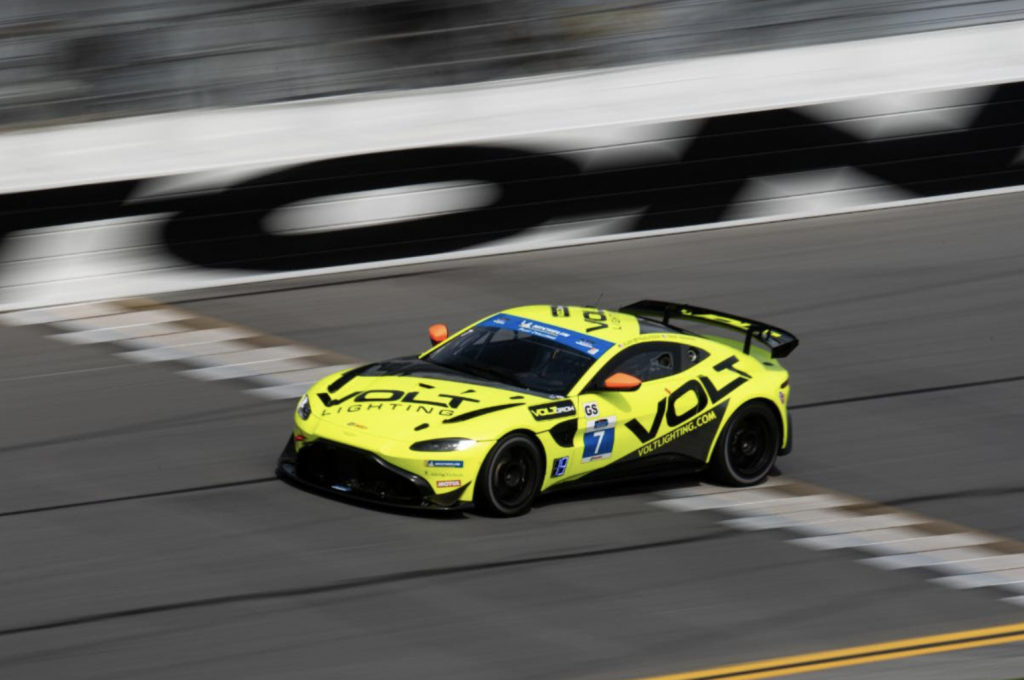 DAYTONA, Fla., (January 26, 2022) – Michelin Pilot Challenge team VOLT® Racing is back for another year of intense competition in the IMSA series, running the No. 7 Aston Martin Vantage GT4 piloted by drivers Alan Brynjolfsson and Trent Hindman. Sponsored by VOLT® Lighting, the team looks to build on last year’s success following a third-place finish in the 2021 GS class championship standings.

In their seasoned relationship together, the pair of drivers have two wins in the Michelin Pilot Challenge and another victory in IMSA’s Prototype Challenge. Brynjolfsson and Hindman have been regular visitors to the podium, keeping the VOLT® Racing within championship contention year after year.

“The team, car, and drivers were all great in last week’s test sessions at the Roar,” said Brynjolfsson. “I am happy to have championship driver and coach Trent back for another year. Looking forward to elevating our performance overall with this professional and proven team. It’s going to be a strong year.”

Motorsports has always been a passion of Brynjolfsson, who founded and transformed VOLT® Lighting from a one-man start-up into a successful industry leader. While other drivers were karting as youngsters, Brynjolfsson built a successful business and found his way into sportscar racing six years ago. After hiring a race coach and gaining valuable track experience, he joined professional racing a year later and was named rookie of the year in 2018 in Pirelli World Challenge.

“I’m very grateful to be back with VOLT® Racing and Alan for another year in Michelin Pilot Challenge,” said Hindman. “We’ve had runs of success, and a good past working together. After last year, it was clear we needed a little more firepower in order to have a real run at the GS championship with how competitive it is this year. We’re confident we’ll have a very strong program. I’m grateful to be back and looking for another successful year with Alan, and looking forward to having Wright Tuning on board.”

The 2022 season will see the Michelin Pilot Challenge visit the same circuits as the previous season, with the addition of Canadian Tire Motorsport Park in July, a circuit that has not seen IMSA since the start of the COVID-19 pandemic. The series will return to the regular fan-favorite tracks such as Sebring International Raceway, VIRginia International Raceway, Road America, and Michelin Raceway Road Atlanta.

The season will officially begin with the BMW M Endurance Challenge, a four-hour endurance race, beginning on Friday, Jan. 28 at 1:35 pm ET. Fans in the United States can watch on NBC Universal’s streaming service, Peacock, and international fans can tune in on imsa.tv. IMSA Radio will also offer comprehensive coverage of each practice, qualifying, and race session, free to stream online or via the Tune In app. For full event schedule information, visit imsa.com.