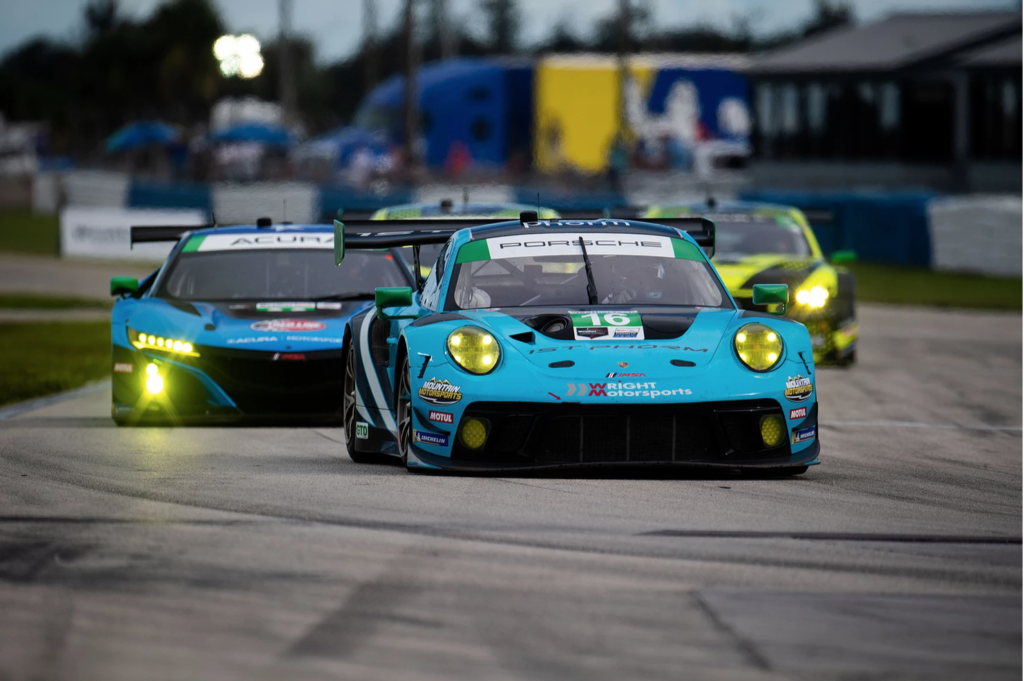 BATAVIA, Ohio, (November 9, 2020) – The IMSA WeatherTech SportsCar Championship’s 2020 season has been anything but ordinary, and this weekend it will come to an exciting conclusion at the Twelve Hours of Sebring. Heading into the final event, Wright Motorsports holds second place in both the team and driver championship point standings in the GTD class. Full season drivers Ryan Hardwick and Patrick Long will be joined by endurance addition Jan Heylen for a final fight to capture the title in the No. 16 1st Phorm Porsche 911 GT3R.

“It has all come down to this final race,” said Team Owner John Wright. “We’ve run a perfect season, and we’re ready for this final push. Absolutely everyone on our team has been flawless all year, showing a united strength in what could be considered a stressful season for a variety of factors. I know we’ll give it our best shot and execute the best we can. I’m proud of everyone and hope we’re there in the end to celebrate a championship.”

Mathematically, the battle for the title falls down to four teams: Meyer Shank Racing, Wright Motorsports, AIM VASSER SULLIVAN, and Turner Motorsport. In order for the Turner BMW to win, the points-leading Shank Acura would have to be unable to start the race, where they would immediately acquire the minimum amount of points. By the numbers, Wright Motorsports can clinch the title if they win the race and Meyer Shank finishes fifth or worse. Any result below first place for Wright results in an “if/then” dance on the results chart, as shown below.

Wright’s strongest advantage all season long has been the team’s consistency. Not only has the group finished the majority of its races in the top five, but they have also continuously been among the fastest in pit stops, gaining at least one position in pit lane in every race. Of the three top championship contenders, Wright Motorsports has the best finishing average in endurance races, with a result of 3.7 compared to the average of seventh place for the No. 86 Meyer Shank Racing Acura and No. 14 AIM VASSER Lexus. Of the full season results, the averages are much closer, with Meyer Shank’s 86 car coming in at 4.6, Wright at 4.8, and AIM at fifth.

Of all the circuits on the 2020 IMSA calendar, Sebring International Raceway can be the most physically demanding. Built on a former army airfield, the bumps of the asphalt and concrete surface are iconic on the racing world for the demands they place on drivers and cars alike. The 3.74-mile course makes for often challenging sessions, which may be further impacted by a tropical storm set to hit Florida next week. With a 30-60% chance of precipitation forecasted for the entire week, it may be possible that race day on Saturday will be the only clear, sunny day in which competitors can get a clean lap.

The three practice sessions for the 68th Annual Mobil 1 Twelve Hours of Sebring Presented By Advance Auto Parts will take place on Thursday, November 12. The GTD class will have a 15-minute qualifying session on Friday morning, and spend the rest of the day preparing for the race ahead. On race morning, competitors will have a 20-minute warm-up session before taking the green flag at 10:10AM Eastern. Fans in the United States can view the race in its entirety on NBC Sports Gold TRACKPASS. On U.S. television, the race will air from 10:00AM ET to 3:00PM on NBCSN before switching to NBC from 3:00PM to 6:00PM ET. The final four hours of television coverage will air from 6:00PM to 10:00PM on NBCSN. Fans outside the U.S. can view on imsa.tv.

This weekend will also see the conclusion of the Porsche GT3 Cup Challenge USA by Yokohama. Charlie Luck, driver of the No. 45 Porsche will compete in his final double-header of the year, following great success in his last string of races leading up to the finale. As the forecast currently stands, the Cup field may have varying weather conditions each day of the event, beginning with the opening practice on Wednesday afternoon. Following a final practice session on Thursday morning, the field will qualify that afternoon. Race one of the Sebring weekend will take place at 8:00AM on Friday, November 13, followed by the final race of the year at 2:35PM on the same afternoon. The races will air live on imsa.tv and tape-delayed on NBCSN Tuesday, November 24.

For all event information, visit imsa.com.

It all comes down to this one race! It’s one shot at winning the IMSA GTD championship! Our entire team has worked extremely hard to get us in this position, to be able to fight for the championship in the final event of the season. John Wright has guided our team with the mantra that consistency wins championships, and our consistent finishes are exactly what has us in this position. But now we have a different focus: Our collective goal is to WIN the 12 Hours of Sebring! If we do that, then we have a great shot at the championship. Personally, I thrive when it all comes down to one race; one shot to win it all. That’s exactly how I’ve won two other world championships in my racing career, and it’s also what I’m most looking forward to about the opportunity we have at Sebring. We have one shot, and that one shot is all we are going to need.

I feel charged up and super proud to be heading into this finale as one of the contenders for the title. Sebring is a bear of a race, and it’s a track and a type that makes its own rules, and you just roll with it. I am focused on continuing to aim for victories, remaining honed in on our process, and bringing as much preparation to the weekend as any car in the race. Thank you to 1st Phorm and Mountain Motorsports for allowing us the chance to line up Saturday with a shot at this!

Nothing is more exciting than going into the last race of the season fighting for the championship! I’m really happy to be a part of this team and doing my little part. We have all the ingredients to do the best job out there: car, team, and drivers. I can’t wait to get the race started at this iconic racetrack.

I’m looking forward to a two-race format in one day as we wrap up our year. It looks like a possible tropical storm is going to play a big role in what track conditions may look like. I’ve never been down in Florida in the rain, so I don’t know if Sebring puddles or drains well, but surely the ground will be saturated by the time we race on Friday. It’s also the end of an era with Carrera Cup coming next year, and the end of Yokohama’s support and the cup series, which has been phenomenal. We’re certainly very grateful to Yokohama for their support. I’m looking forward to seeing what the future format holds for the sport.