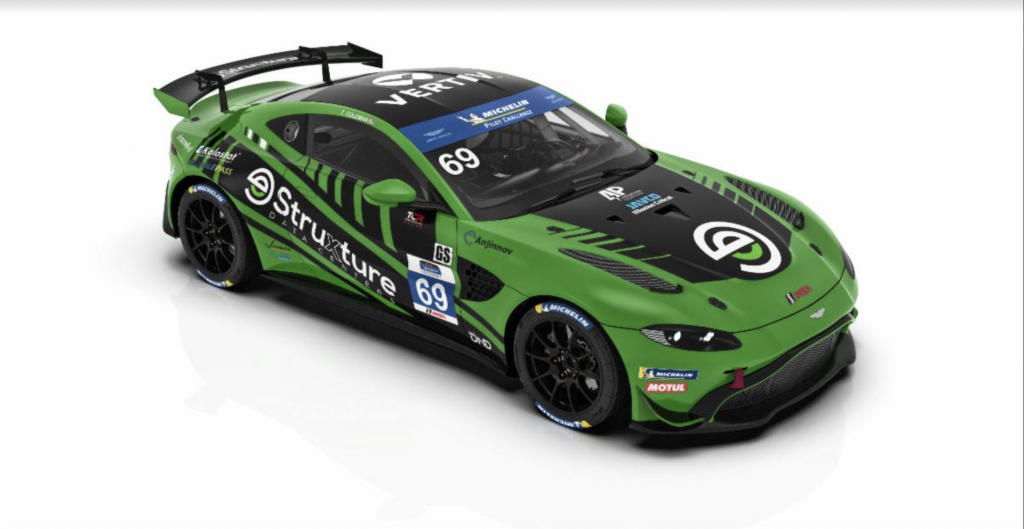 DENVER, CO. (December 27, 2022) – A new season of the IMSA Michelin Pilot Challenge is almost ready to begin, and Todd Coleman Racing (TCR) has worked diligently in the off-season in anticipation of the team’s series debut at Daytona International Speedway, Friday, January 27. With the support of Archangel Motorsports, the team will proudly campaign the No. 69 eStruxture Data Centers Aston Martin Vantage GT4 with drivers Todd Coleman and Conrad Grunewald. This season, Coleman and his team will make their Michelin Pilot Challenge debut at Daytona and plan to continue in the series at select events throughout the 2023 race season.

As the four-hour season-opening race, the BMW M Endurance Challenge at Daytona never disappoints. Last year saw over 100 drivers compete in 47 entries, representing 10 different automotive manufacturers. The participants’ race on the speedway’s road course: 3.56 miles of asphalt that include the oval’s turns as well as the facility’s infield course, including 12 turns in all. The event at the “World Center of Racing” will be Coleman’s first experience participating in an endurance race, a milestone he is eager to achieve.

Coleman just closed out a strong season in SRO America’s Pirelli GT America and GT4 America, driving alongside IMSA WeatherTech SportsCar Championship regular Aaron Telitz. Racing a Toyota GR Supra GT4, Coleman earned three podiums, competing against a tight field at the best road courses North America has to offer. Coleman has also been a championship contender in the Ferrari Challenge North America over the past three years, finishing second in the Pro/Am class standings in 2022. He completed 38 races in three countries this season, building his race craft to prepare him for the level of competition the Michelin Pilot Challenge will provide.

“I am constantly looking to improve as a driver, and the only way to truly improve is to race against the best, and the best always show up for the Michelin Pilot Challenge four-hour endurance race at Daytona,” said Coleman. “We spent a significant amount of the off-season putting together a program that we believe will be a podium and championship contender.”

Joining the team in their Michelin Pilot Challenge debut, Conrad Grunewald is a strong co-driver to race alongside Coleman in the season-opener. Also an SRO America regular—where he finished second in the Fanatec GT World Challenge America Am championship–Grunewald spent 2022 in various racing opportunities as well, competing in the Asian Le Mans Series, FIA World Endurance Cup, and European Le Mans Series. His participation in the BMW M Endurance Challenge at Daytona next month will be his first time racing in the series since 2014.

“I’m really looking forward to racing with Todd and the TCR team at Daytona,” said Grunewald. “Todd has been improving every weekend since he started racing a few years ago, and it seems the Aston Martin platform suits his driving style. The last few years I have been driving GT3, but I have heard great things about the GT4 platform, so I am excited to have the opportunity to race it at such an iconic track.”

The addition of Archangel Motorsports to the Todd Coleman Racing program will provide the team with a strong foundation to begin competition in the IMSA-sanctioned series. Founded by Mike Johnson in 1998, Archangel has grown into a championship-winning effort, contributing to multiple professional sports car racing championships and monumental race wins.

“A big key to having the right foundation as we start this endeavor is partnering with Mike Johnson and the Archangel Motorsports team, and Aston Martin Racing, all of whom know how to win,” said Coleman. “For me, life has become about the experiences; racing with Conrad and the Archangel Team at Daytona in my first-ever endurance race is certainly going to go down as one of my more epic experiences.”

Running as an opening act for the iconic IMSA WeatherTech SportsCar Championship’s Rolex 24 At Daytona, the BMW M Endurance Challenge at Daytona will take the green flag on Friday, January 27 at 1:45 PM Eastern, with all four hours airing live on Peacock. For more information, visit imsa.com.