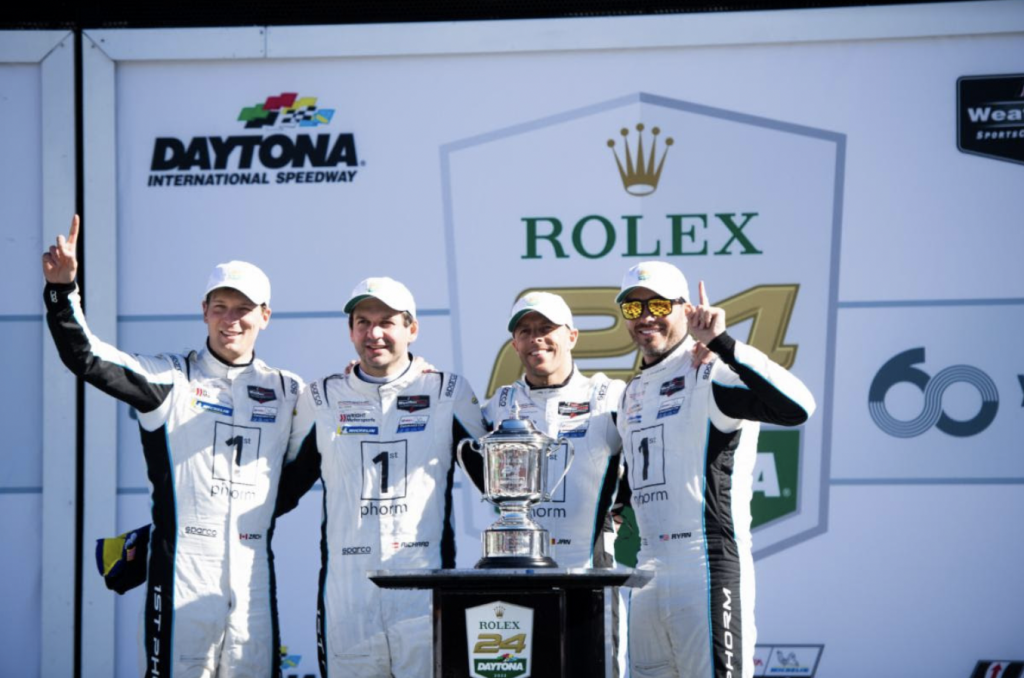 DAYTONA, Fla., (January 30, 2022) — Sunday afternoon at Daytona International Speedway, Porsche customer racing team Wright Motorsports celebrated a well-earned victory at one of the most prestigious sports car racing events in the world: the Rolex 24 At Daytona. The IMSA WeatherTech SportsCar Championship GTD class team executed a near-flawless race to triumph in the end at the Daytona Beach, Florida-track, racing the No. 16 1st Phorm Porsche 911 GT3 R with drivers Ryan Hardwick, Jan Heylen, Zacharie Robichon, and Richard Lietz. The team also secured the most points towards the Michelin Endurance Cup, the four-race championship within the full season championship, a title the team won in 2021.

“This is an event I’ll never forget,” said Team Owner John Wright. “The relationship between Wright Motorsports and Ryan Hardwick has been incredible, and to see our on-track results progress year after year really goes to show the drive he has, the quality of people he surrounds himself with, and the strength of our outstanding crew. They all earned this.”

After a heavy crash sidelined Hardwick from participating at Daytona in 2021, the driver of the 1st Phorm Porsche felt he had a mission of personal redemption to complete this year at the “World Center of Racing.”

Though the temperatures on Saturday afternoon were low compared to earlier in the week, the sun shone over the speedway on race day, keeping competitors warm for the 1:40 pm Eastern start. Hardwick started the race from 11th position in the GTD class, keeping the Porsche clear of the heavy traffic to enjoy a clean start. The first full-course caution came out after 43 minutes of running, and Hardwick made the car’s first stop, handing the wheel over to 2021 GTD Champion Zacharie Robichon. Robichon restarted from tenth and jumped two cars on the start. Just a handful of laps later, the No. 16 1st Phorm Porsche rocketed to second-place in the GTD class, 4.8 seconds behind leader Luca Stolz in the No. 75 Mercedes.

In the subsequent hours, Robichon, Heylen, and Hardwick rotated through the car. Not taking any unnecessary risks, the Ohio-based operation mostly kept the car in the top five, and primarily in the top two of the class. Heylen took the lead by 9:30 pm, and the team pitted to put Hardwick in, rejoining in fifth place. A rare penalty for missing the red pit lane exit light dropped the team to seventh, but the strategists in pit lane immediately got to work, adjusting the strategy to climb back to the front during the night.

Temperatures dropped into the low 30s F as Saturday turned to Sunday, and the team bunkered down in hopes of having a calm night of racing and being present for the fight when the sun rose over the track. Instead, a series of cautions plagued the night, never letting the competitors get too comfortable. At the halfway point, Lietz got in the Porsche and took the lead, which he held through the darkness to the end of his stint. His run moved the team up front again, which is exactly what his co-drivers did, running at the top of the GTD class, leading the field into Sunday’s sunrise.

As is the standard for the Rolex 24 at Daytona, the tension and excitement increased with the dawn, as did the temperatures, at last. The team continued to focus on keeping the car clear of any aggressive driving or contact, picking their battles wisely in order to last to the end. With just two hours remaining, it became clear the battle would be between the No. 16 Porsche in first and the No. 21 Ferrari of Toni Vilander. Heylen took over for the final stretch of stops, at one point leading by almost a lap. A full-course caution and pass-around for the field effectively eliminated Wright’s large lead, but as the field went back to green, Heylen stayed patient, using traffic to his advantage. With one hour left, a car stalled on track, and the team immediately called the Wright Porsche into pit lane. The last-minute dash worked perfectly, as the car received tires and fuel and exited pit lane before a caution came out, effectively giving Heylen a large lead over the field. From there, the 1st Phorm Porsche charged forward to the checker, with the gap over the second-place car again growing, thanks to expert driving and strategy, and a penalty on the No. 21 car.

The blue 1st Phorm Porsche took the checkered flag in first place, earning the team their first win at the iconic event. The special occasion marked the third win for Lietz, and the first for Hardwick, Heylen, Robichon, and Wright.

“I can’t think of a better group of crew and drivers to have won this event with,” concluded Wright. “Having Ryan a part of our program and to have such strong supporters in Porsche Motorsport North America, 1st Phorm, Mountain Motorsports, and Una Vida Tequila only makes us stronger. I couldn’t be prouder to have them on our team. I can’t wait to see what this year has in store.”

After leading 258 of 761 laps, the team also secured the Michelin Endurance Cup win, after being awarded the most points for leading the race during specific points on the clock. Wright Motorsports won the championship in 2021, in addition to clinching the Michelin Pilot Challenge with Hardwick and Heylen. The duo, with Robichon, next race at Sebring International Raceway for the Twelve Hours of Sebring, March 16-19. For more information, visit wrightmotorsports.com.

Ryan Hardwick
What a day. What an experience. For me personally, from being in a hospital room across the street a year ago watching this race, to coming back one year later with my same team and winning this historic race… this will forever be the most special moment of my life. I can’t thank John Wright and Bobby Viglione, our engineer, for their leadership and guidance of our team. They never lost their belief in me. They believe in me 100 percent and I believe in them and this team. This was something I knew we could do but it is hard to put into words having done it. I want to thank 1st Phorm. Without all of their help and support, it simply wouldn’t be possible. And also my great teammates. Unbelievable driving, especially through the night and here at the end of the race by Jan, Zach, and also Ritchie. Just unbelievable driving. I couldn’t be more blessed to be surrounded by such great people. I couldn’t imagine any other group I would want to share this experience with.

Jan Heylen
Unbelievable. After all these years, to finally win the race. It is special to be here with all of these guys. It has been seven or eight years I have been a part of Wright Motorsports with Johnny [Wright, Team Owner] and Bobby [Viglione, Team Manager] and the whole team. We wouldn’t be able to do this without Ryan and 1st Phorm so big thank you to them and to Porsche for putting out a good product. I couldn’t be happier. It was a good way to end the season at Atlanta and a good way to start the new season here. I am looking forward to Sebring.

Zacharie Robichon
What can I say? From the beginning, the Wright Motorsports team did a fantastic job. The race was insane. With 61-cars, the battle was crazy from the beginning. It was about surviving and making the right decisions. Every driver was quick and smart. The car is mostly unscathed and that is all you can ask for in this race. To be honest, I can’t even put into words how I am feeling right now.

Richard Lietz
Thank you to the team. This is the first time we have worked together, and I think everyone felt very comfortable from the beginning. It has felt like home, and it was a lot of fun for 24-hours. Of course, to win it and get the watch is something you cannot plan. A 24-hour race here in America is quite crazy; the best drivers in the world with the best brands fighting for this watch and we were the lucky ones. I am very happy.