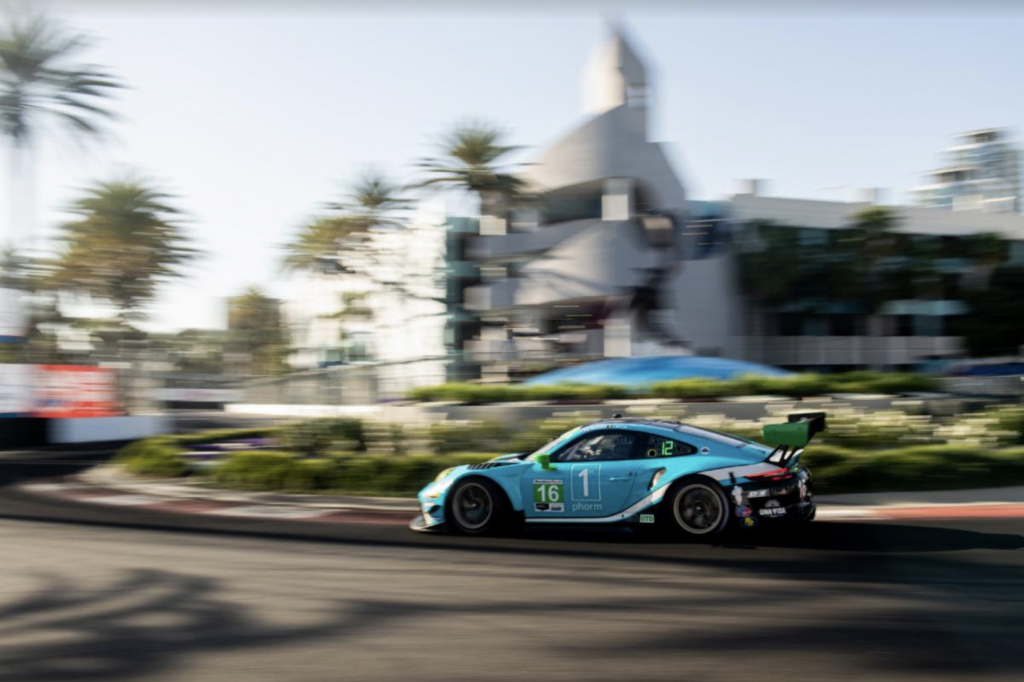 LONG BEACH, Cali., (April 10, 2022) — The streets of downtown Long Beach roared with the sound of sports cars on Saturday afternoon as the IMSA WeatherTech SportsCar Championship conducted round three of the season. The Wright Motorsports duo of Ryan Hardwick and Jan Heylen put in another vigorous performance in the No. 16 1st Phorm Porsche 911 GT3 R, earning a top-five finish from a twelfth place starting position. Despite contact on two occasions from other cars, the team recovered to finish the race, placing as the top Porsche in the field.

“Our team demonstrated some real tenacity this weekend,” said Team Owner John Wright. “Temporary street courses like Long Beach can be challenging to pass on, but our drivers and crew did a great job racing clean and hard to get us upfront. The contact was unfortunate, but we made the best of it and ended the day on a high note.”

The weekend marked Ryan Hardwick’s first time at the 1.968-mile street course. The Atlanta, Georgia native had two practice sessions and one qualifying session, all on Friday, to learn and get up to speed and comfortable with the circuit. He qualified the No. 16 1st Phorm Porsche 911 GT3 R in twelfth place after a car ahead slowed and prevented him from setting in his flying lap.

After two days with record-setting temperatures in the high 90s, race day finally brought cooler temperatures, dropping over 20 degrees. Hardwick took the green flag and enjoyed a completely green flag stint. It was a battle of the Porsches with Rob Ferriol, as the two traded positions in the opening laps. Hardwick won the fight to hold twelfth, placing him behind Cooper MacNeil in the No. 79 Mercedes. The tight street circuit gave little opportunities for Hardwick to pass, though the 1st Phorm driver continuously produced faster laps than the car ahead.

He pitted for the team’s one and only stop, getting out as the car took on a new set of tires and received a full tank of fuel. Belgian Jan Heylen took over the driving duties, joining the race in 13th with 60 minutes remaining on the clock. He quickly passed the No. 34 Porsche of Kyle Washington, focusing next on the No. 70 McLaren of Frederick Schandorff. The McLaren pulled away, but Heylen made speedy work of Katherine Legge in the No. 99 Porsche, climbing to 11th.

The first full-course caution came out when the curbing in turn five became displaced, closing the gap from Heylen to the No. 51 Acura of Ryan Eversley. Heylen restarted from tenth, and again climbed a spot to ninth before the next two full-course cautions. With 16 minutes to go, attrition began to pick off competitors and the No. 16 Wright Motorsports Porsche took advantage, sitting eighth for a final sprint to the checker flag. Back to green and with 13 minutes remaining, Heylen had a brief but epic battle with Bill Auberlen in the No. 96 BMW, taking seventh place in turn one.

In the final ten minutes, Wright had cracked into the top five, looking to challenge for fourth place when a Mercedes divebombed the Porsche, spinning the car. Heylen recovered and continued after losing valuable track time, and the Mercedes received a drive-through penalty. The Porsche recovered to race in sixth and gained back fifth position after the Mercedes served the penalty.

Set as the first sprint race in the 2022 calendar, the team’s fifth-place finish is a strong start to the IMSA WeatherTech Sprint championship. The series’ California swing takes the competitors next to WeatherTech Raceway Laguna Seca near Monterey for the Hyundai Monterey Sports Car Championship Presented by MOTUL. The April 29 to May 1 event will see Wright Motorsports run the WeatherTech 1st Phorm Porsche as well as the team’s three Porsche entries in the Porsche Carrera Cup North America Presented by the Cayman Islands.

Ryan Hardwick
That was a great end result from where we started. Coming from 12th position all the way to a top-five is a win for our team today. We didn’t quite have the pace as some of the other cars but we were able to keep our nose clean for the most part and avoid any major mistakes. Our pit crew was unbelievable. I think we had the fastest pit stop of the entire field, which definitely helped. We got a couple of cautions in Jan’s stint that enabled us to work up towards the front. I’m glad to come out of here with a top five. I really enjoyed my first experience in Long Beach. I look forward to coming back again but being more towards the front and competing for the win. Now our sights are set on Laguna Seca and I’m looking forward to going back to a track that I actually know.

Jan Heylen
It was a decent result, given where we started. Everybody would have been satisfied with a fourth-place finish, had it not been for getting taken out by the Mercedes with a few laps to go. That was unfortunate. I’m a little disappointed about that. As a team, everybody did a good job. Ryan had a really good first race here at Long Beach. It was a good experience for him, and he found his groove towards the end, and it was great to see. There’s a lot to take back from this race. At the end, fifth isn’t the worst result. We wanted to win, but that wasn’t in the cards today. Good championship points in sprint, and I’m looking forward to Laguna Seca.

Porsche Carrera Cup North America Presented by the Cayman Islands
Running in support of the IMSA WeatherTech SportsCar Championship, the Wright Motorsports trio of John Goetz, Hutton McKenna and Varun Choksey each were also new to the Grand Prix of Long Beach street circuit. The Porsche Carrera Cup North America Presented by the Cayman Islands weekend consisted of two forty-minute races, the first of which took place on Saturday morning under sunny skies and relatively cool conditions. Choksey led the Wright cars to green from 10th in the Pro class, with McKenna in 13th, and Goetz second in the Am class. Round three was anything but boring, with 24 Porsches fighting for position all over the 1.968-mile street course. Most notably, a Porsche ended up in the bushes of the famous fountain, and at one point, six cars sat spun out at the hairpin due to liquid at the apex of the corner, causing a 15-minute caution. The Wright drivers and machinery thrived in the intense race, and John Goetz earned his first win of the season. Hutton McKenna celebrated his first top-ten finish of the season, and Choksey finished eighth, earning his third top-ten result of the year. The second race failed to go as well as the day’s before, with the Wright drivers facing new attrition. McKenna and Choksey suffered contact from other cars while Goetz suffered a possible mechanical issue in the final lap.