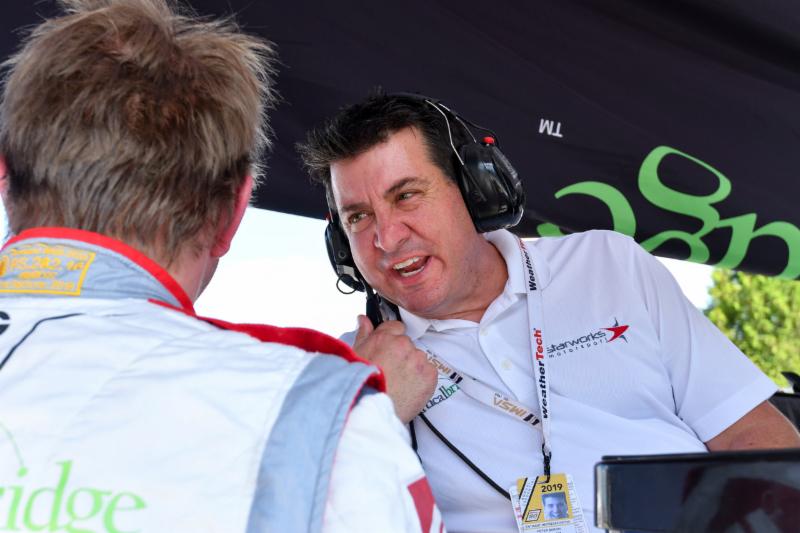 DEERFIELD BEACH, Fla., (December 9, 2019) – On its 10 year anniversary, Starworks Motorsport will return to prototype racing for the 2020 season, running in IMSA’s LMP2 class under the team name of Tower Motorsport by Starworks. December 12th will see the four-time prototype champions taking delivery of a new ORECA 07 chassis, entering the four Michelin Endurance Cup races, with hopes to expand to the remaining three sprint races. John Farano and Ryan Dalziel will race as the full season pilots, joined by David Heinemeier Hansson for all endurance races, and Nico Lapierre as an addition for the Rolex 24 At Daytona.

“I can’t thank John Farano enough for the call,” said Team Owner Peter Baron. “His call came the day after IMSA released the 2020 rules requiring a Bronze rated driver as part of a line-up. John shared my vision of no excuses and doing whatever it takes to win, and after a few more follow-up calls and emails, we had a program. Starting off the project with a new Oreca 07 was an easy decision. We’ve put together an amazing group of Starworks alumni who are excited to return back to prototype racing. This should be one of our best seasons in motorsport and I believe we are a very strong contender to win the Rolex watches at Daytona in two months.”

“We are thrilled to welcome back Starworks Motorsport in the ORECA family,” said an enthusiastic Anthony Megevand, ORECA Technology Customer Racing Manager. “We know the team as we had some great achievement together with the ORECA-FLM09. Peter Baron and his team also proved in the past how strong they can be in LMP2 and their commitment with the ORECA 07 shows the growing interest for the class in IMSA. We are looking forward to opening this new chapter with a strong lineup. We are also happy to see LMP3 title winner John Farano onboard. It is definitely an exciting program and a true contender in the WeatherTech SportsCar Championship.”

“Without John this might not have happened, so I am incredibly grateful for his faith in Peter and I,” said Dalziel. “The decision to go back to prototype racing has brought a fresh energy to this team. With previous Prototype efforts, we’ve won several championships, as well as the 24 Hours of Le Mans and Twelve Hours of Sebring. We know we have what it takes to run a championship winning effort. I’ve known John for many years when we both raced in the Grand Am days, and DHH and I were teammates together in WEC. Adding Nico, another previous teammate into our Daytona roster is really the icing on the cake.”

Tower Events and Seating Services will join the team with Farano as the team’s primary sponsor. Tower Events and Seating Services is North America’s leading supplier in the design, engineering and installation of temporary grandstands and hospitality structures servicing major events including: the US F1 Grand Prix; the Canadian F1 Grand Prix; the Firestone Grand Prix of St. Petersburg; and, recently selected as the supplier of temporary structures for the 2020 NFL Super Bowl set to take place in Miami, Florida.

“I am extremely excited to be returning to IMSA competition and looking forward to once again racing at North America’s premier circuits starting with Daytona in January” said Farano. “Ryan and I have talked about this program for a couple of months now and I am very happy that it has all come together. I know Ryan is excited about returning to prototype class racing and with his talent and experience, will no doubt make me a better driver and immediately allow us to compete for wins. I have followed Peter’s operation for many years and know that he and Starworks Motorsport will deliver a highly professional and competitive program that all of us will enjoy and have fun with. I can’t wait to get started and I’m looking forward to what I believe will be a fantastic 2020 IMSA season.”

“I thought I was done with Daytona, but getting another crack in an LMP2 with such a strong line-up and team proved too tempting to pass up,” said Heinemeier Hansson. “Who knows how much longer we’ll have these glorious LMP2s running at their full 600hp capacity. One last bite at the best American tracks in the most wonderful of racing cars? OKAY THEN!”

Four time 24 Hours of Le Mans LMP2 class winner Nico Lapierre will join the team for the Rolex 24 at Daytona. Lapierre and Dalziel previously ran prototypes together as teammates at Tequila Patrón ESM, where Lapierre’s car won the 2018 Twelve Hours of Sebring. The French driver, with two LMP2 championship titles to his name in the FIA World Endurance Championship will prove to be a strong asset to the team.

“I’m really pleased to join the Starworks effort for the Rolex 24 At Daytona,” said Lapierre. “It will be my first race for Starworks but I know how professional and successful the team is. I like the new rules for the LMP2 category in the IMSA and I’m sure we will have a competitive line up and we will fight for the victory. I can’t wait for January!”

David Leach, 3-time WEC LMP2 Championship and multi Le Mans winning engineer, will return to Starworks bringing with him vast experience in the sports car racing industry. He was first introduced to IMSA working with Starworks back in 2014 and helped lay the engineering foundation for the team to win the most races over of the life PC class. Additionally, David is a development engineer at Groupe Oreca providing support for the current 07 chassis and is currently the technical director for G-Drive Racing.

The team will take delivery of their brand-new chassis December 12th, just before the first event of the season, at the Roar Before the 24 at Daytona International Speedway. The first official all-series testing weekend of the year will be conducted just after the New Year and feature several days of on track testing and media activities in anticipation of the new season. The 2020 Rolex 24 at Daytona, the first race in the full season, as well as the Michelin Endurance Cup, will take place January 23-26, 2020 at Daytona International Speedway. For all series information, visit imsa.com.

Tower Events and Seating Services
Tower Events and Seating Services has a wealth of experience in providing scaffolding for major restoration, industrial, institutional, and special event projects. We are experts in engineering scaffolding solutions for challenging environments where structural integrity or environmental impacts are a concern. Our engineering team is known for their creativity and innovation when it comes to working in difficult situations.