Pleasant Grove, UT (Jan. 9). Snow Racing completed the Roar Before the 24 this week at Daytona International Speedway as the top Porsche and second car overall in the GT Daytona class of the TUDOR United SportsCar Championship test. In the first official test of the 2014 race season, teams were given the opportunity to participate in eight test sessions, totaling over twelve hours of on track time to prepare for the 52nd anniversary Rolex 24 at Daytona.

Drivers Madison Snow (Lehi, UT), Jan Heylen (Tampa, FL) and Marco Siefried (Amerbach, Germany) piloted the No. 58 Porsche 911 GT America, competing 167 laps over the three day test. Snow Racing first tested the new Porsche 911 GT America in November and with Wright Motorsports has since made vast improvements on the race set up as understanding of the car increased. The team approached the Roar Before the 24 test with purpose, placing consistent lap times.

“We made good progress over the three days,” said owner Martin Snow. “We ran the car as hard as we could and the whole tea 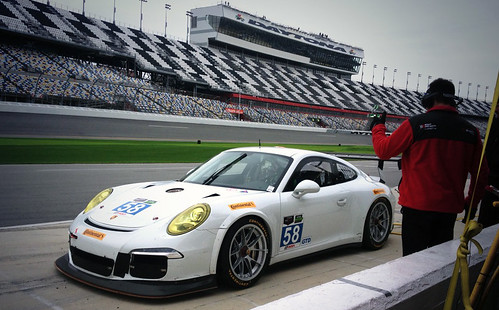 m did a great job. There were eleven other teams on the entry list running the new car as well, so we’re all still learning. To come out with the best lap time of the Porsches gives us a good momentum.”

Although there is still much to learn, the team feels well prepared for the Rolex 24 Hours. The event will kick off the start of a new level of competition in American sports car racing as the TUDOR United SportsCar Championship, the result of the unification for the GRAND-AM Rolex Sports Car Series and the American Le Mans Series. Classes in both series will combine to compete on the same track, showing strengthened efforts from teams, drivers, and manufactures.

“All the manufacturers are bringing out their best cars and drivers,” said John Wright. “It’s going to be a big race and a big season. It’s going to be a competitive series, and for this first test of 2014, it’s nice to Jan was able to come out on top as the fastest Porsche. Madison, Jan and Marco each put down solid lap times and really pushed the Porsche. They worked together well to help us continue to develop the car, and will be a strong lineup for the race.”

Madison Snow, Jan Heylen and Marco Siefried will return to race the No. 58 Porsche in the Rolex 24 at Daytona January 25-26. For more information visit IMSA.com.