Sarah Tilley: So You Want to Run a Race Team?

Sarah Tilley: So You Want to Run a Race Team? 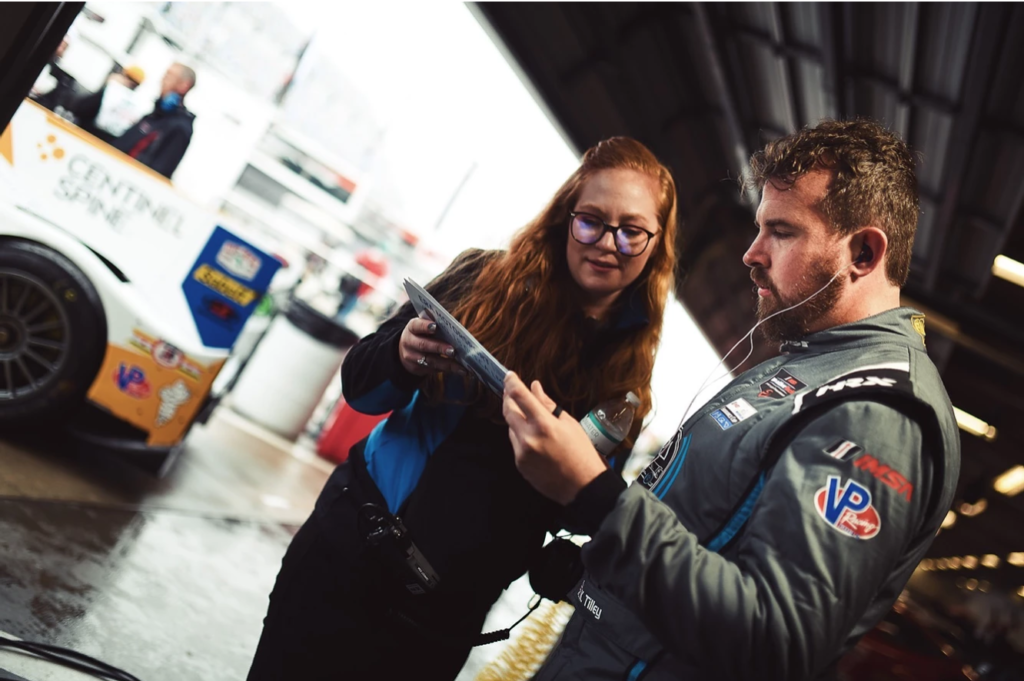 Welcome to the glamorous, behind the scenes world of racing. I’m Sarah, a wee cog in the wheel that makes the Era Motorsport team keep rolling. I wear a few hats, like Team Coordinator, the girl who pays bills, sometimes graphic designer, team mom, etc. You wouldn’t believe how many jackets get lost on a weekend, and I’m constantly asking, “Hey, did you eat yet?” With these various roles, I think I just may be able to give you some extra insight into the new kids on the LMP2 block.

I know you are really here for the goods about the race team, but bear with me, we’ll get there. Like I said, my name is Sarah. I happen to be married to the fabulous racing driver Kyle Tilley. We co-own Era Motorsport together, and, as such, racing basically rules my life from sun-up to sun-down. Well, racing and chocolate chip cookies.

I went to circle track races with my dad on the weekends when I was growing up, but it wasn’t until I met Kyle that I really got to dive into the world of motorsport, especially when we left everything to move to Indy to start our own team in March of 2018. We started small, one vintage formula 5000, a single car trailer, a Walmart pop-up tent and a big dream. The world of classic race cars has been good to us, and I have met some of the most wonderful people along the way, some of them which I have the pleasure of working with on our newest endeavor, IMSA WeatherTech SportsCar Championship with our beautifully built Oreca 07 LMP2.

Late October 2020, the idea of running at Daytona for the Rolex 24 began to formulate, a glimmer of that pre-mentioned dream dancing on the horizon. The excitement I felt about being part of an effort in such an awe-inspiring event still gives me butterflies. Not long after, the green light was given and we were pedal to the proverbial metal from that point forward.

The car was built at the Oreca factory in France in the month of November, the process finalized with a shakedown by our very own Nic Minassian. He called right after driving it for the first time, and the statement that sticks with me from his review was, “It was beautiful.” Such a simple statement, but in it conveyed that we were about to receive a well balanced weapon with which we would take on one of the largest challenges of our life.

The Oreca 07 arrived to New York and made its way to our Indianapolis headquarters, arriving in the wee hours of the morning. In a flurry of excitement, the doors opened and they wheeled out a carbon fiber masterpiece fresh from her maiden trans-Atlantic voyage. We stood in awe, not only of the car, but of what it being there, physically in front of us promised. I also couldn’t believe how snug that cockpit was.

The next day, the car headed to Florida for our first test at Sebring International Raceway. I booked some flights and hotels and sent out a lot of paperwork. (Sorry, guys.) Kyle had put his years in both professional and historic paddocks to use and pulled together a team which I am so proud of. As we arrived at the hotel to meet the new crew, I felt like a kid about to start at a new school. It was soon apparent that the crew members Kyle picked were all extremely hard working, dedicated and exceptionally skilled. Stepping into my team mom role, I focused on making sure they were all well fed because food makes people happy, and helps when things get stressful.

In addition to the cool stuff that happens on the track with race cars, the stuff that we all see, we also had a lot of nights full of what we affectionately dubbed “Computer Club,” ordering parts, cross checking endless lists and formulating more plans. We took up more than our fair share of space with computers and reams of paper in the lobby of Tru by Hilton’s hotel. Crew members left for dinner and came back again, casting odd looks as we occupied the exact same positions they had passed us in hours before. You wanted glamorous, right? We have had a few more club meetings since, but thankfully not as often as that first test.

There were so many things I had never thought about needing to order for the team, like special reflective arm bands and enough fireproof underwear to outfit a small army. Obviously, I knew these things existed, but it was now up to me to make sure the team had all of the little things along with food, a place to sleep, a way to get to and from events, schedules, etc. It’s been a learning process, but I think I’m getting the hang of it, guided by my many spreadsheets and trusty binder of important information, as well as all of the wonderful people who have graciously offered their own knowledge and assistance.

Everyone made it, on time to both the Roar and the Rolex 24 at Daytona, so I must have done something right! Those first few days of set-up, practice and qualifying runs were almost torture as the anticipation of the moment that green flag would fly approached. Twelve to 16 hour days every day, Christmas included, and we were almost there.

Being at the track is my favorite part. Not only is there a special thrum of energy that really revs me, but the majority of the hard work for me is in the planning. If I did my job well, race weeks should be relatively smooth sailing.

I only lost my drivers once. They are seriously fast, those guys. One moment, I have three of the four in one place and the next I have lost them all with 10 minutes before they are supposed to be introduced on a world stage. I am clearly not a racing driver. I just couldn’t keep up. But, with seconds to spare, they were all four united, leading the LMP2 parade through a sea of fans all craning to catch a glimpse of the excitement. The moment was almost there.

The anthem was sang and those famous words rang out. “Ladies and gentlemen, START YOUR ENGINES!” And the rest is history. Twenty-four grueling hours, near misses, hearts being poured out by drivers and crew, everyone giving 1000%. A perfect race. Beautiful pit stops, clean driving. Twenty-three hours passed, and then came the 24th, possibly the longest hour of my entire life to date. We were in third place with a two lap lead over the next car with 40 minutes to go. I was glued to the screens. With 30 minutes to go, it was so close but we weren’t there yet, and my stomach was in knots. I started to pace. Twenty minutes, back to the screen. I can almost taste it. I feel like Hayden Panettiere as the little girl in Remember the Titans, I wanted it so badly, even though I wasn’t a player in the game at that moment. Ten minutes, this could really happen, a podium in our first professional event. Checker flag. We did it. Third place at the 24 Hours of Daytona. Tears were shed. Don’t worry, I won’t name names, but it wasn’t me. Hugs all around. Congratulations spread, happiness raging like wildfire, and it was so well deserved. They earned it. They did it. We did it. History for Era Motorsport, our big dream coming true.