Roar Before 24 Kicks Off Magnus Racing’s 10th Anniversary of Their First Rolex 24 Victory at Daytona, Begins Endurance Season with New Car, new Livery, and a Lot of the Same People, Plus Some Brits

Roar Before 24 Kicks Off Magnus Racing’s 10th Anniversary of Their First Rolex 24 Victory at Daytona, Begins Endurance Season with New Car, new Livery, and a Lot of the Same People, Plus Some Brits 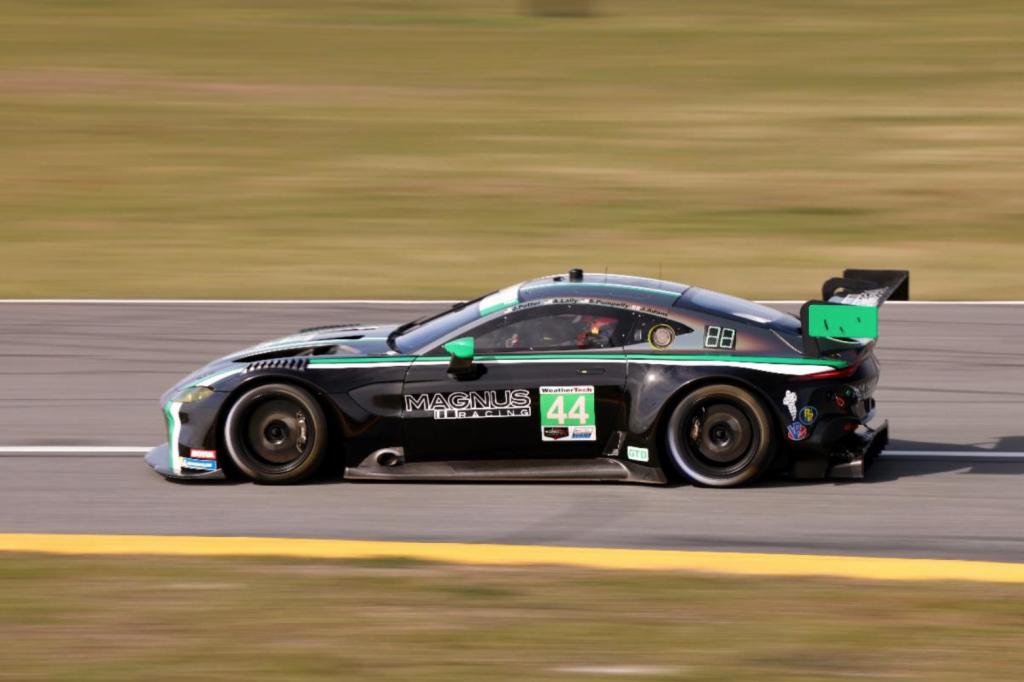 Happy anniversary to us! Ten years after our first of two victories at the Rolex 24 At Daytona, we’re returning to Daytona International Speedway to start another attempt at getting ourselves some new watches. #HatTrick. If you’ve been paying attention, you are aware that we are now flying the Union Jack, racing a new Aston Martin Vantage GT3. After two seasons of partnering with other race teams, we’re excited to get back to the original team of Magnus Racing in what will be a fun season ahead.

We’re quite pleased to confirm we are running in the four IMSA WeatherTech SportsCar Championship endurance races that make up the Michelin Endurance Cup. In addition to our loyal chaps in John Potter, Andy Lally, and Spencer Pumpelly, we’ve brought in Jonny Adam, a factory driver for Aston Martin Racing to race alongside our American trio at Daytona and also teach us all the proper British manners and show us how to make a proper cuppa.

Jonny Adam will likely be the most civilized and well-behaved of the group, though us Yankees will fix that in no time. This spry young fellow will be a good fit to our band of misfits, with some serious endurance time in the Aston under his belt. He’s a multi-year British GT Cup champion and has won the 24 Hours of Le Mans twice in class. This season, he’s celebrating his tenth year as an Aston Martin Racing factory driver, so be sure to give him a warm welcome!

Andy first joined us in 2012 and has earned six wins and 26 podiums with us in various machinery at some of North America’s best tracks. He’s a three-time Grand-Am champion, and five-time Rolex 24 At Daytona winner, two under the Magnus banner. He’s been with us in Porsches, Audis, Acuras, and we’re chuffed to have him and his talent on our team for another season. In addition to racing with Magnus this year, you’ll also catch Andy in at least six of the road course races in the NASCAR Xfinity series throughout 2022.

Despite a rumor that he may have committed manslaughter (relax, newbies, it’s a joke. You had to be there), we are also fortunate to have another season with Spencer Pumpelly. He’s a former ST Champion, and a two-time Rolex 24 At Daytona winner. He’ll be competing in his 21st Rolex 24 at Daytona this year, after completing his first at the age of four, of course. In his free time, he spends his off time as lead guitarist in the Atlanta-based rock group, The Terrible Two. He first raced with us in 2017 Pirelli World Challenge before moving over to our IMSA program in 2019. Despite being vegan (along with his #TeamATL pal, Andy), he has been a strong endurance lineup to our team, celebrating three podiums with us.

Although we’d certainly never try, we’re happy that we can’t get rid of Andy Lally, and Spencer Pumpelly. John Potter, Team Somebody, also continues to stay in the driver’s seat. Coincidentally, like Magnus Racing, John too, is celebrating the 10th anniversary of his first Rolex 24 at Daytona Victory, he’s excited to be embarking upon the new endurance season from the comfort of his home team. This will be his 13th-or we’ll just say 14th-season of racing at this level, and he hopes to add to his endurance-racing victories while competing at his favorite events of the season, all four of them. He’s especially grateful this year to the AMR and the crew and team administration for their hard and diligent work in the “off-season” to prepare the program for 2022.

“We are delighted that Magnus Racing has chosen to join forces with Aston Martin Racing for their 2022 IMSA programme,” said Huw Tasker, Head of Customer Racing. “We look forward to seeing what the team can achieve this year with their new Aston Martin Vantage GT3, particularly given their significant experience of the IMSA WeatherTech SportsCar Championship. The addition of Magnus Racing to the AMR family is a testament to the continued growth of the Vantage programme in North America, and with four cars running in GTD at Daytona for the first time this year, these are exciting times for Aston Martin.”

We had a jolly good show with the new car in December and have worked since to further prepare the car for the season ahead, starting with the Roar Before the 24. As is tradition, we’ll begin the 2022 festivities with the Roar, a three-day test for us to take our new motor car out for a spin and get ready for the exciting days ahead. The Roar will conclude with a qualifying race on Sunday, January 23 at 2:05 pm Eastern. This will be a 100-minute race that will determine the starting grid for the Rolex 14 At Daytona the following weekend. Just consider it as a very long qualifying session. The Motul Pole Award will air on Peacock, the new streaming home for IMSA. IMSA Radio will continue its coverage, of which you can listen online for free. For further event and schedule information, please visit the official IMSA WeatherTech schedule page.

Our team of merry laborers is working hard at our annual poster reveal, so you’ll have to wait just a little bit longer. Stay tuned for FRIDAY on Rolex week, for your eyes only.