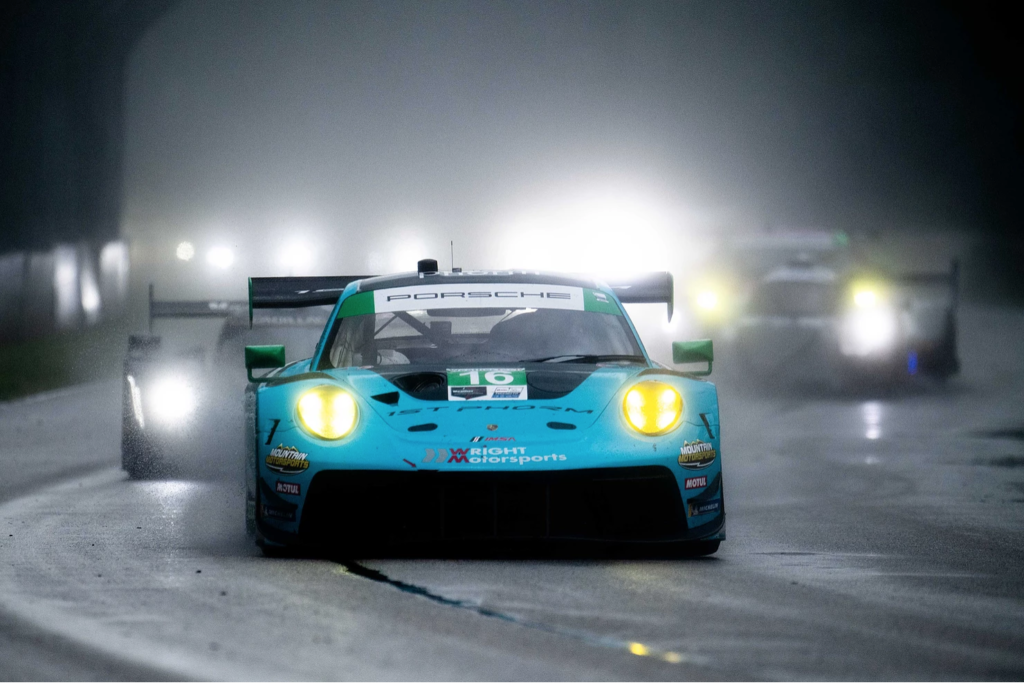 The 31-car field took the green flag under cloudy skies, racing through the four-mile track with no opening lap incidents. Hardwick, the starting driver, dropped a position to tenth, and engaged in a stint-long battle with the 44 of John Potter for position. Potter applied heavy pressure, but Hardwick maintained position as the GTD field spread out. Hardwick pitted from ninth for his mandatory stop, handing the wheel over to Patrick Long while the car received fresh tires and a full tank of fuel.

Due to a speedy stop by the No. 16 crew, the 1st Phorm Porsche gained a spot, put in the position to fight with the 62 of Toni Vilander for position. With every lap, Long continued to close the gap, gaining seconds of time to catch up to the leaders. Rain clouds loomed large over the Wisconsin circuit with just over an hour remaining, and eventually, a torrential downpour opened up around the circuit. The severe weather produced several crashes and a 15-minute red flag, forcing the entire field to park in pit lane.

The calamity played into Wright’s hands, thanks to strong rain racing by Patrick Long as the racing resumed. He restarted in fourth, as the rain continued to descend over the circuit. With just a few laps remaining, the weather got worse, resulting in a final caution period with which to end the race. Long successfully brought the Porsche across the finish line in fifth place.

Wright Racing’s IMSA program will next race at the Michelin GT Challenge at VIRginia International Raceway at the end of the month, August 21-23. Fans will be unable to attend the event, but can watch on NBC Sports TrackPass on Saturday, August 22 at 1:40PM Eastern. For event information, visit imsa.com.

What a wild finish at Road America! We are happy to be leaving here with solid championship points. Our top five result really happened for a couple of reasons: Firstly, our engineers made a great call by waiting to make he thefinal pitstop until the rain started to fall. This enabled us to switch over to rain tires just in time for the final sprint to the finish. Also, my teammate Patrick Long drove an amazing final stint. I’m not sure how he could see anything in that downpour. I think he must use “The Force” to get the car around the track in those conditions! I’m really proud of our entire team today, and looking forward to carrying the momentum to VIR in a couple of weeks.

Another eventful IMSA race. Road America always has some treats towards the end. The strategy, pit stops, and execution of the race today were spot on. We made positions where we could and ended up with a top-five finish. It was a pretty clean race for us. The car was unscathed at the end. Compared to some, that’s a great way to push forward to the next round. It was a decent points day, and as a group, we’re continuing to grow. That’s what it’s all about.