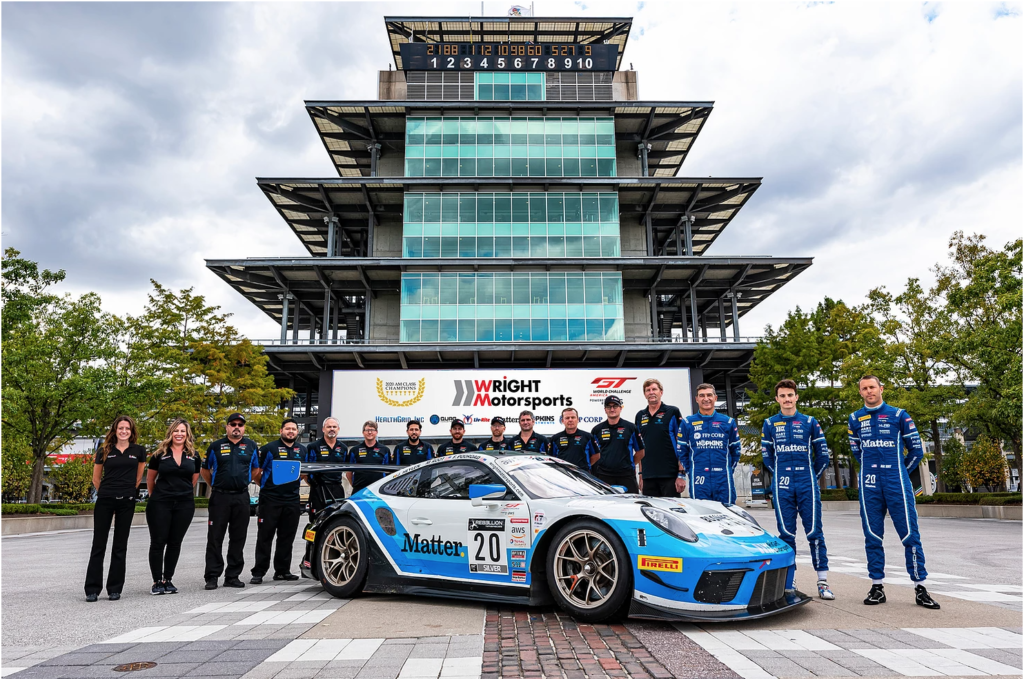 INDIANAPOLIS, Ind., (October 6, 2020) – The 2020 GT World Challenge America championship concluded on Sunday at Indianapolis Motor Speedway, and Wright Motorsports closed out the season victorious as the Am class team champions and driver champions with Max Root and Fred Poordad. After a season filled with 90 minute doubleheaders, the team finished the year by participating in the Intercontinental GT World Challenge Indianapolis 8 Hour, where they claimed the class victory and a sixth-place overall finish.

“I’m so proud of Fred Poordad and Max Root for winning the championship,” said Team Owner John Wright. “I’m proud of all of the guys at Wright Motorsports for helping them do that. The Indianapolis 8 Hour was a good day, but we would have had some icing on the cake if we didn’t have the drama of the rain in the beginning. We had the pace to be in the top four with an all-silver lineup. Thanks to Porsche, thanks to everyone at Wright, the crew, and thanks to Fred and Max for making this all happen. There is a light at the end of the tunnel for the COVID year.”

The No. 20 Porsche 911 GT3 R performed just as strong as it had all season, putting in incredibly consistent lap times, and showing its versatility in all weather conditions over the course of the eight-hour endurance event. While the skies were dark and overcast during the pre-race ceremonies, the radar looked fairly promising as a storm cell moved north over the legendary speedway. However, within just moments of the field taking the green flag, the skies opened and rain poured down, forcing the entire field to pit shortly after for tires and fuel. The pre-determined dry-condition strategy for all teams went out the window as some teams attempted to out ride the storm on slick tires, and others immediately put on rain tires. Max Root and the Wright Motorsports Porsche 911 GT3 R stayed out to see if the conditions would change, moving up from the seventh-place starting position to fifth.

After 15 minutes, it was clear the weather had no intention of subsiding, and Wight Motorsports pitted Root for rain tires, moving the No. 20 Porsche down to 15th overall. Over the course of the next hour, the conditions worsened, bringing out a lengthy series of full course cautions until the standing water around the circuit subsided. Root took the conditions in stride, finishing his stint in eighth before being replaced by Jan Heylen. Heylen gained a position before contact for the race leader moved the No. 20 Porsche up another overall spot, fighting for sixth place with DXDT Racing’s Colin Braun. He broke into the top five by the end of his single stint, allowing Fred Poordad to jump in with three hours of the race complete.

Shortly into Poordad’s stint, the tire pressure alarm on the left rear tire went off, and the team pitted the Porsche out of precaution. The call was warranted, as Poordad indeed had a punctured left rear tire. He rejoined in eighth overall and pushed forward to recover as much lost space as possible. He ran for almost two and a half hours, turning the team’s first dry laps of the race at the halfway point. Root resumed his duties at the conclusion of Poordad’s stints, and after pit stop perfection from the Wright Motorsports crew, the No. 20 Porsche gained a valuable position over the No. 04 DXDT Racing Mercedes in pit lane. The team captured sixth place and held it to the checkered flag, securing the Silver Cup class win.

Following the victory celebrations on the iconic Indianapolis Motor Speedway podium, the GT World Challenge powered by aws series gathered together to celebrate a season well done. Wright Motorsports was awarded the 2020 Team Champion title, followed by 2020 Sprint Am Driver Champion Fred Poordad accepting the top-step trophy for himself and co-driver Max Root. In the end, Wright Motorsports closed out the 2020 season with seven class wins and four overall podiums. For all future team updates and announcements visit wrightmotorsports.com and follow the team on social media.

Well that was an eventful eight hours. I’m thankful to Wright Motorsports for giving us a great car again. I’m thankful to my co-drivers Max Root and Jan Heylen. We had a great run. There were a couple of unfortunate things that happened out of our control, but we were still very happy with how we placed today. The entire team is very excited. It was a very cold, rainy day at Indianapolis, but it’s great to be here with all of the history. Winning the am championship was great for us. It was a great entre into the series. We won in our class, which is also very good. It’s nice to go home with some hardware. I really want to share this with the entire team. It really was a team effort and all the work that the guys put in all season to get us here today.

It was definitely a successful weekend at Indianapolis Motor Speedway. We ad the pace early on, and had a decent qualifying and super pole performance. Our strategy fell apart when the rain fell, but we were able to come back and fight hard to take first in class, sixth overall in a competitive field. I’m happy to have that experience with the team and my co-driver, Fred. It was nice to have Jan join us, and have all three of us wrap up the championship together. I can’t thank everyone enough at Wright Motorsports and Porsche Motorsport North America, and I look forward to what the future holds with the team.

It was a fun race. I’m really happy to have been able to race here with Wright Motorsports, Fred, and Max. Unfortunately, the start was not as good as it could have been for us. We were hoping it was going to dry up and we could have saved a pit stop, but it didn’t and unfortunately, it put us behind a little bit. From there, it was a battle to get back on the lead lap. The car was really good in the dry, and it was really fun to drive. It’s a nice, fun race and I hope we can do it again.