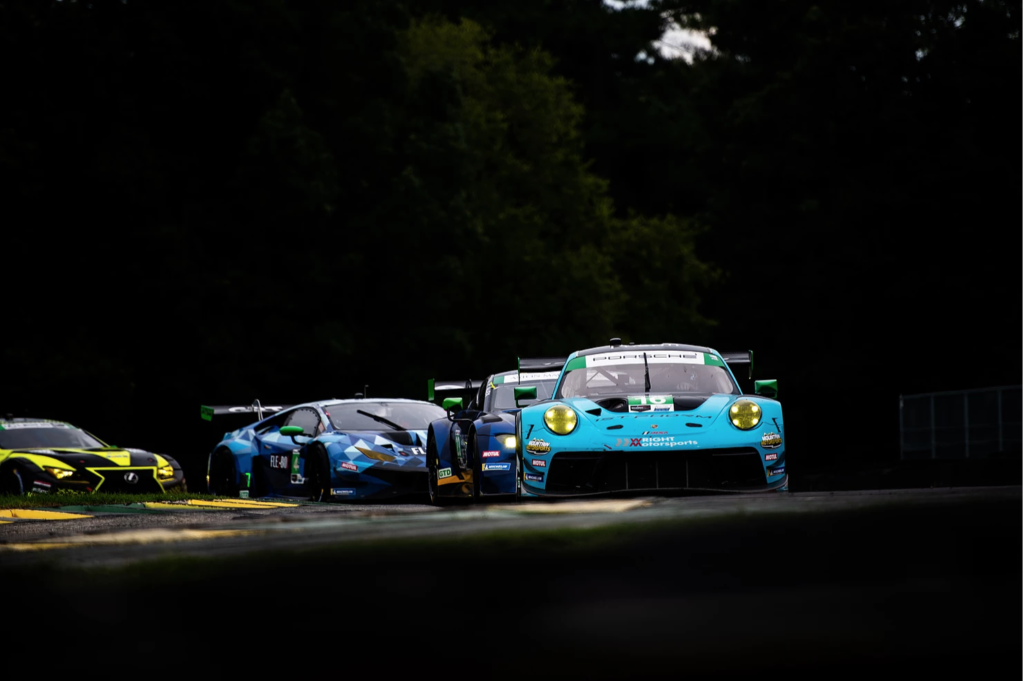 ALTON, Vir., (August 22, 2020) – The Michelin GT Challenge at VIR offered a variety of excitement this weekend as 20 GT cars in two classes battled it out for another exciting round in the IMSA WeatherTech SportsCar Championship. The 1st Phorm No. 16 Porsche 911 GT3 R showed strong speeds all weekend, culminating in a run through the field from a 12th place starting position to finish in fifth place with Ryan Hardwick and Patrick Long.

Hardwick began Sunday’s two hour and forty-minute sprint race from 12th, following a competitive qualifying session on Saturday afternoon. The green flag changed to yellow within the first lap for debris in turn one, but after a quick clean up, the racing resumed. Hardwick held 12th position, and as the field spread out, the level of difficulty to pass for position increased. With the power of the Porsche and through skilled maneuvering, Hardwick gained a position to 11th, before the next full course caution allowed the field to bunch back up and close his five-second gap to 10th.

The team used the caution to pit with most of the GTD field, taking on fresh fuel and tires. A strong pit stop by the team gained the No. 16 Porsche four spots upon exiting pit lane. Another car pitted later in the caution, moving Hardwick up to restart from seventh. He gained a position on the restart and battled with the No. 48 of Madison Snow. Snow took the position, but the pair moved up, placing Hardwick in sixth by the third full-course caution.

With less than an hour and a half remaining in the race, teams began their mandatory driver changes, leading to an anxiety-inducing battle between Hardwick and the No. 74 of Lawson Aschenbach for fourth place. He completed his stint, pitting from fifth to hand the No. 16 Porsche over to Patrick Long.

With fresh tires and a tank full of fuel, Long joined the fight, with just over one hour remaining. Long rejoined in eighth, making quick work of the 2.6-second gap to the No. 57 of Alvaro Parente. From there, Long engaged in a contentious battle with Andy Lally in the No. 44, eventually taking sixth place. Sixteen minutes remained on the clock as Long worked to close the 5.4 second gap to Jack Hawksworth in the No. 24. Despite the necessary speeds to lessen the gap, the clock ran out, and Wright Motorports celebrated a well-earned sixth-place finish at VIRginia International Raceway. A post-race disqualification for one of the podium finishing cars brought the No.16 back up to the top-five in the final results.

The IMSA WeatherTech SportsCar Championship has a two-week break until the next round, the Michelin Endurance Challenge Weekend at Michelin Raceway Road Atlanta. The six-hour endurance event, traditionally the Sahlen’s Six Hours of the Glen in July, was moved to Road Atlanta September 4-6, another change due to the COVID-19 pandemic. The 12-corner, 2.54-mile road course will be the first of two 2020 events held at the Braselton, Georgia circuit, with the field returning in October for Petit Le Mans. For full series and schedule information, visit imsa.com.

What a race! I’ve never been so proud of a sixth-place finish in my entire life! After starting from 12th on a track that is notoriously difficult to overtake on, our Wright Motorsports team made some stellar strategy calls and executed lightning-fast pit stops which put us inside the top five early in the race. It felt great for me to be in the fight and battling with the race leaders at the front of the field for most of what ended up being a double stint for myself. I had a little moment with another car on the final lap of my stint that cost us a couple of positions, but I’m still very proud of our team and our final result from VIR. I’m personally gaining confidence with every lap I drive this Porsche, and I’m really looking forward to racing at my hometown track at Road Atlanta in a couple weeks!

Today was a successful one. Sixth doesn’t yield quite the result that we put together to charge from behind. Sometimes you finish off the podium and it’s still a sweet result. I’m proud of everyone for battling through. It was great to watch Ryan hold off some ten-year veterans in his stint. That put us in the position to fight inside the top-ten. It became a fuel-saving game at the end of the race, and no one was really able to push. We were light on our feet and had plenty of tire left. We could have used a yellow flag, but many would tell the same story. We’ll push on to Road Atlanta for a longer race where qualifying may have less of a load-bearing weight on the outcome. I’m happy with our progression and we’ll push on.