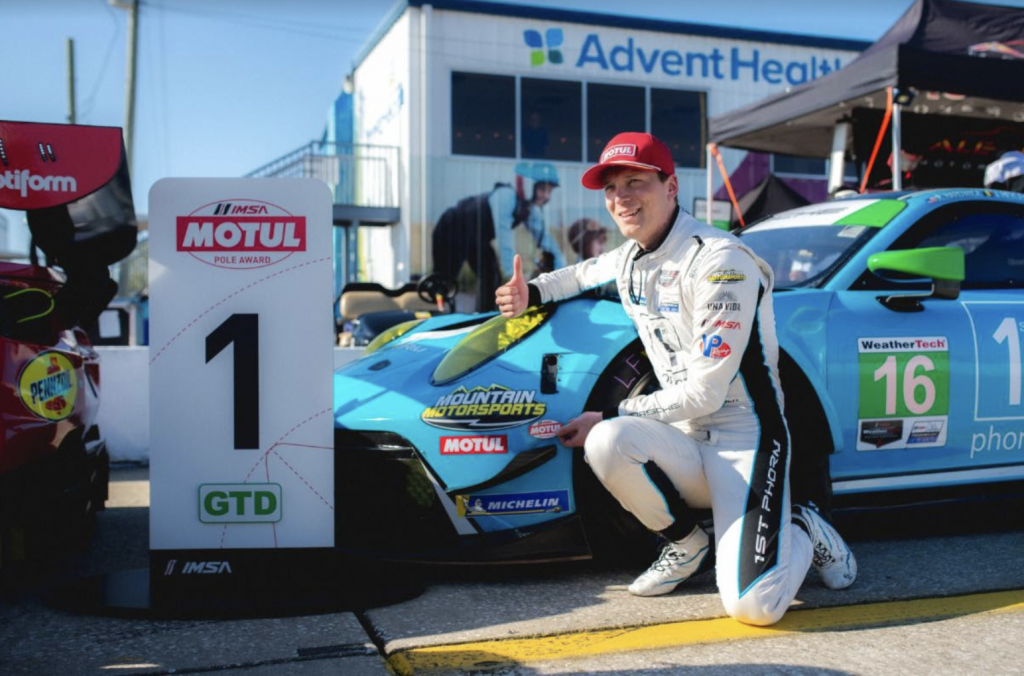 SEBRING, Fla., (March 18, 2022) – Friday morning at a sunny Sebring International Raceway, Zacharie Robichon qualified the Wright Motorsports No. 16 1st Phorm Porsche 911 GT3 R on pole position, setting the championship leaders up to start the Twelve Hours of Sebring in first place on Saturday morning, March 19. The team and drivers Robichon, Ryan Hardwick, and Jan Heylen sailed in on the momentum from January’s victory at the Rolex 24 At Daytona, motivated to return to Sebring’s top step after winning the event in 2020.

The day started with a brief practice session under relatively cool temperatures in the 60s F, much different than the high 80s of the day before. The No. 16 Porsche ran five laps, placing third in the session. Qualifying followed after a short break, giving the GTD class 15 minutes to challenge for the fastest lap and top starting position. The qualifying session was interrupted by a red flag, but after five laps of green-flag running, Robichon was able to position his sixth circuit of the 3.74-mile, 17-turn track to set a flying lap time of one-minute, 59.763-seconds. His lap time put Wright Motorsports 0.332 seconds head of Robby Foley in the Turner Motorsports BMW M4 GT3, who will start in second-place next to the Porsche.

“We knew the car was relatively strong, but I didn’t know if we could go for pole,” said Robichon. “We made some small changes between the practice and qualifying, which made all the difference. For the first few laps, I thought it was best to be smart and see what happened. We got one clear lap, which is all we needed. It was fantastic. It’s a long race, I hate to say this, but in these big races, qualifying doesn’t matter. It’s still nice, and it’s a good tip of the hat to the team to show the work they’ve put in. Let’s have the real fun tomorrow.”

In capturing the pole position, the team extended their championship points lead by an extra 35 points, giving a little extra cushion over the competition as the season continues.

“There’s no better place to start than up front,” said Hardwick. “Zach did an amazing job. It was a bit unexpected. There are a lot of really fast cars here. While we knew we’d be competitive, having a first-place result in qualifying is exceptional in this heat. Tomorrow will be a tough and long race for the pit crew, with temperatures in the 90s. We’re going just try to keep our head down, stay clean, and when the sun goes down and the competition heats up, I think we’ll have a great car, in the end, to fight for the win.”

Race day will call for partly cloudy skies, with temperatures reaching the mid-70s by the race start on Saturday morning. The high of the day will hit 91-degrees, adding another challenge to the twelve-hour endurance race. Drivers and crew will have to take care to stay hydrated and cool, operating at peak performance to make it to the night for the hard fight in the final hours.

“We have super momentum coming into Sebring,” said Heylen. “We carried it straight into qualifying. It was a super lap by Zach and the whole team this weekend. It hasn’t been easy. Tomorrow will be one of the tougher races, given the temperatures. I’m very confident in what the team and drivers can do. It’ll be a long race but we’re looking forward to it.”

The 70th Annual Mobil 1 Twelve Hours of Sebring Presented by Advance Auto Parts will begin on Saturday, March 19 at 10:10 am Eastern. Fans can watch Wright Motorsports lead the GTD class to green live on Peacock.