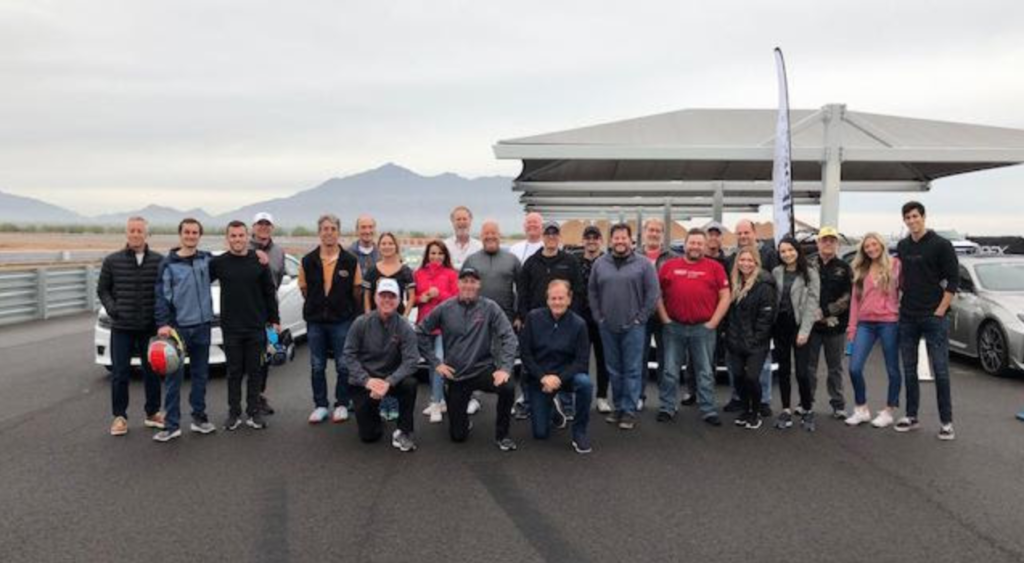 On the first evening of the track day event in Bowling Green, Kentucky, Performance Track Day will host a cocktail hour and dinner with a special keynote speaker, Doug Fehan, Corvette Racing Program Manager of 25 years. All coaches will be in attendance for the special event, Saturday, June 19. Access to this exclusive dinner will not be limited to track day participants, and reservations can be made on online [LINK].

“When you look at the all-star lineup of drivers involved, who wouldn’t want to be part of this event,” said Fehan. “This is a great opportunity to socialize and learn from the absolute best. Not to mention, getting to have dinner with me!”

Designed to offer a fantasy camp spin on the track day experience, Performance Track Day provides an experience where individuals can take their own car on track, under the guidance of professional race car drivers, to fully experience the full capability of both the car and the driver. Founders Johnny O’Connell and Darren Law run each event which start with a casual introduction to the basics of car control and line technique before splitting drivers into groups based on experience or skill level. Throughout the day, each group goes through a rotation of on track sessions with one set of coaches and off-track debriefs with another set of coaches. The day concludes with one final group meeting. Unlike the previous PTD events, participants will have the flexibility to sign up for just one or both available days.

NCM Motorsports Park, home of the National Corvette Museum, will be the perfect track to host such a stout lineup of coaches for a track day experience.

Three-time IMSA champion Jordan Taylor is currently in his second year with Corvette Racing as a factory driver on their WeatherTech SportsCar Championship effort, racing the Chevrolet Corvette C8.R.. The 29-year old already holds three podiums at the famed 24 Hours of Le Mans, including a win in 2015. Known for his alter-ego Rodney Sandstorm and his lively social media content, young Taylor is a fan favorite for his fun-loving personality.

“I can’t wait to be a part of Darren and Johnny’s program coming up in June,” said Taylor. “They have put together a great program with their track days and I am really excited to be there with the group of coaches they’ve assembled. I haven’t done a huge amount of coaching in the past, but each time I’ve done it, I’ve found it to be very rewarding to see someone grow in the sport I love and I often find myself learning new things that I can use when I go back to racing. It’s going to be a cool event being in Corvette’s backyard, so can’t wait to see all the Corvette owners there in a few months.”

Few names are as synonymous with Corvette racing as Jan Magnussen. The Danish race car driver spent 16 years as a Corvette Factory driver, earning four class victories at the 24 Hours of Le Mans, and two championships, each in the American Le Mans Series and what is now the IMSA WeatherTech SportsCar Championship.

“I’m really looking forward to once again being with the fans of Corvette Racing and sharing with them what we do in the race car,” said Magnussen. “Johnny and I won a lot of races and championships together, so it will be fun being at the circuit again with him, as well as Jordan and Andy.”

With five championship titles to his name, Andy Pilgrim will join his former teammates, rounding out the celebrity lineup. Pilgrim served as a GM factory driver for many years, earning five podiums in six 24 Hours of Le Mans Le Mans attempts. For over 20 years, Pilgrim raced directly for factory or factory-supported teams with Corvette, Cadillac, Pontiac, BMW and Porsche, making him arguably the most well-rounded coach in the performance track day program.

“I am so excited to be part of Johnny and Darren’s Performance Track Day event,” said Pilgrim. “It will be a total blast to be around old teammates, competitors and even The Boss, Doug Fehan! NCM is such a great track, I’m sure everyone, from us pros to the guests, will have a fantastic time and learn a tremendous amount.”

NCM was designed with challenging features that are reminiscent of the famous La Sarthe in Le Mans, France. The course consists of a two-mile, 13-turn west course and a one mile, 10-turn East course which can be combined into multiple configurations. Both circuits feature technical turns, straights and elevation changes. These two courses can be used independently or connected into a unique large course.

Registration for the special dinner and Performance Track Day experience on June 19-20 is now open, so register today!