NTE/SSR Seeks Out Unfinished Business at Watkins Glen with Yount, Conwright, and Holzer

NTE/SSR Seeks Out Unfinished Business at Watkins Glen with Yount, Conwright, and Holzer 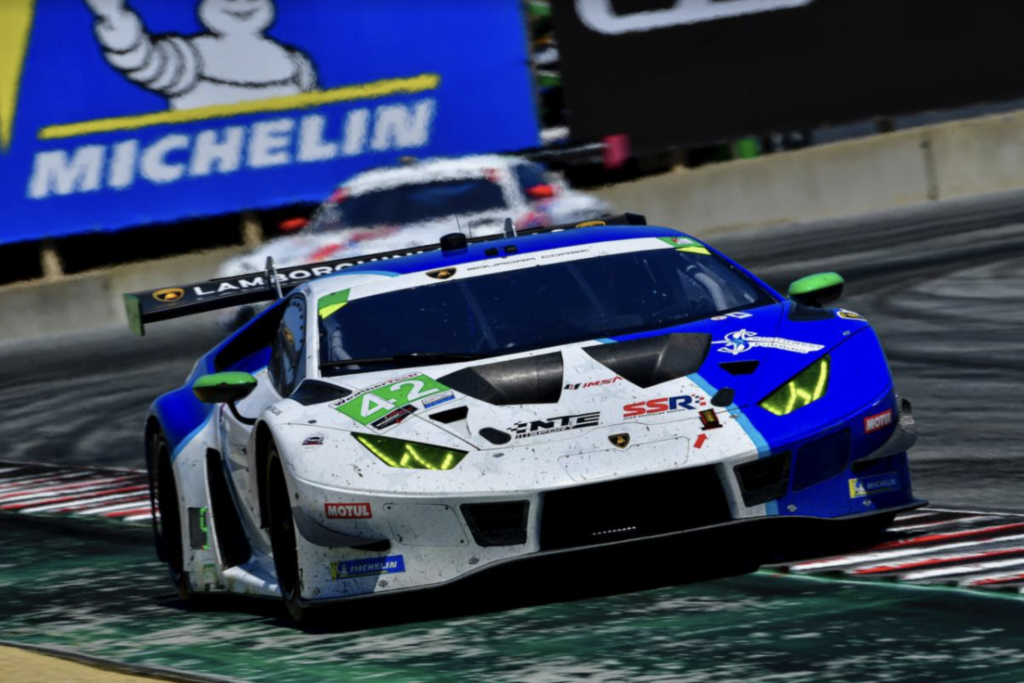 DALLAS, Tex., (June 13, 2022) – After taking a brief hiatus from the 2022 IMSA WeatherTech SportsCar Championship schedule, Lamborghini customer racing team NTE/SSR is back and ready to race next week at the Sahlen’s Six Hours of the Glen. After finishing fourth in the six-hour endurance sports car race last year, the team has unfinished business at the event, hungry as ever to score their first podium finish as a group. This year’s Sahlen’s Six Hours of the Glen will bring together NTE/SSR regular co-drivers Don Yount and Jaden Conwright with Marco Holzer returning, racing the No. 42 Lamborghini Huracan GT3 Evo.

“I’m thrilled to be getting our GTD program back on track, literally,” said Team Owner Paul Mata. “It was heartbreaking for us to miss Long Beach, Mid-Ohio, and Detroit, but we made the most of the time we had, and we’re excited to enter the second half of the 2022 season. We have some great things in store, and I’m looking forward to kicking off this string of upcoming races with such a strong driver lineup. We’ll have a good run in New York!”

The longest-running driver in the NTE/SSR program, Don Yount has completed six WeatherTech races to date under the leadership of Mata. Conwright first joined the program in 2021 at Watkins Glen International, making his professional sports car racing debut with an impressive third-place qualifying effort. That weekend, with third driver Markus Palttala, the team finished in fourth place, their best result to date. Holzer made his return to IMSA earlier this season, racing alongside Conwright in round five at WeatherTech Raceway Laguna Seca. An issue in the pits cost the team a podium run, but the pair still earned a sixth-place finish, the team’s best result of their three races so far this season.

The Six Hours of the Glen is arguably one of the top fan-favorite events of the year, taking place in the Finger Lakes region of upstate New York. The 11-turn, 3.4-mile road course offers exciting turns and a long back straight, with plenty of ground for fans to roam and explore over the course of the six hours of racing. The race will stream live with comprehensive flag-to-flag coverage on Peacock, on Sunday, June 26 at 10:40 AM ET, and air tape-delayed on the USA Network from 2:00 PM to 5:00 PM ET.

Don Yount
Having the opportunity to get in the NTE/SSR Lamborghini for the Sahlen’s Six Hour is highlighted by having strong teammates for the race. My co-drivers had a strong last race and want to keep the moment going to show what the team can do. We need some luck to go with our preparations to make it happen.

Jaden Conwright
I’m looking forward to heading back to Watkins Glen after making my debut in GTD one year ago. We came just shy of a podium last year, so I think we have some unfinished business this time. NTE/SSR has been making steady progress with our Lamborghini Huracan GT3 so I’m sure we’ll be in the sharp end with Don and Marco in the car alongside me!

Marco Holzer
After a very strong race at WeatherTech Raceway Laguna Seca I’m looking forward to jumping back in the car for the Sahlen’s Six Hours of the Glen. A small refueling issue was costing us the podium finish at Laguna, so let’s focus and go again.