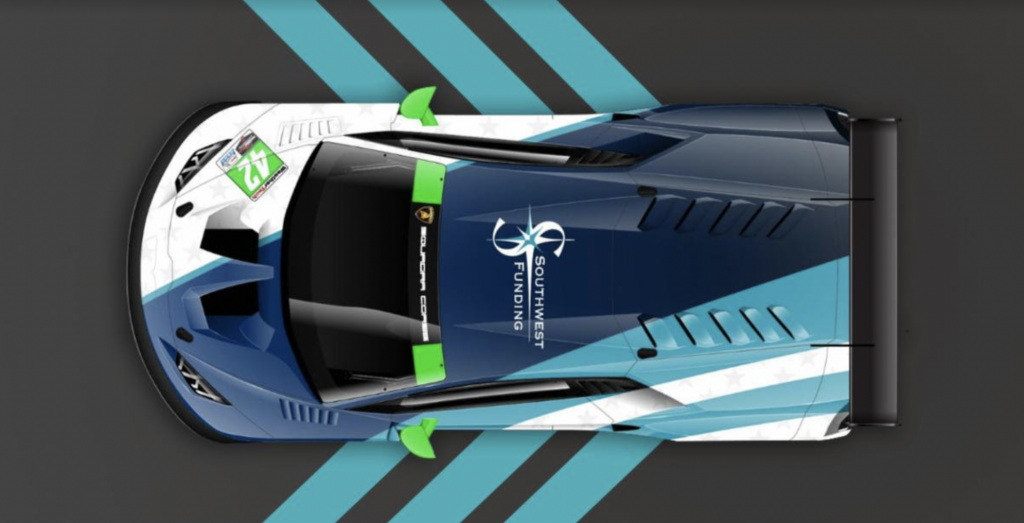 DALLAS, Tex., (March 8, 2022) – The festivities for the Twelve Hours of Sebring get underway in less than two weeks’ time, and IMSA WeatherTech SportsCar Championship team NTE/SSR will welcome Lamborghini GT3 Junior driver Mateo Llarena to race in the No. 42 Lamborghini Huracan GT3 alongside Don Yount and fellow Junior driver Jaden Conwright in the March 16-19 event.

“We’re excited to welcome Mateo to the team,” said NTE Sport owner Paul Mata. “He demonstrated great skill with T3 Motorsports at the Rolex 24 At Daytona in January, and we’re always glad to have another Lamborghini GT3 Junior driver join our mix. A mechanical issue ended our race early in the opening round of the season, so we’re looking forward to the chance to rebound and get back out there and fight for a race win.”

The team started the season in January at the Rolex 24 At Daytona, completing roughly 75 percent of the race until an ABS failure led to an incident that caused contact and took the car out of the race. The twelve-hour race marks the second event in the 2022 IMSA WeatherTech calendar, creating an all-out endurance competition across five classes.

“The whole team is excited to get back on track and show our success at Daytona before the brake failure was not a fluke,” said Yount. “I am confident that NTE has the issue sorted and we will be out the gate from first practice. Sebring is super tough on the car so we will find out quickly.”

Don Yount and Jaden Conwright were two of the four drivers in the Rolex 24 lineup, with Conwright being the sole driver confirmed for the entire 2022 season. While the Daytona race did not go according to plan, Conwright is making a name for himself early in 2022, becoming one of the newest Lamborghini GT3 Junior drivers as well as the inaugural recipient of the IMSA Diverse Driver Development Scholarship.

“I’m looking forward to heading back to Sebring as I made my debut with NTE and in IMSA at the 2020 Michelin Pilot Challenge event there,” said Conwright. “The Twelve Hours of Sebring is definitely a different beast to the other endurance events I’ve competed as the track’s characteristics are as much of a rival as the other cars. The pace at Daytona was solid up until we were forced to retire due to a technical fault, so I’m confident that we can continue and build off our experience during the Rolex 24 and optimize our NTE/SSR Lamborghini Huracan GT3 Evo with more time.”

NTE/SSR newcomer Mateo Llarena has much in common with Conwright, with both recently joining the Lamborghini ranks as GT3 Junior drivers as well as both making into the top ten of the IMSA Diverse Driver Development Scholarship. Though only 18 years old, Llarena is also quickly earning his keep in the sportscar racing world, currently holding the title of the youngest driver to secure an IMSA WeatherTech Motul Pole Award following his first-place qualifying at age 17 at Watkins Glen International in 2021. The young Guatemalan racer began go-karting at four years old, earning multiple karting championships. In 2018, he got his first taste of sports cars, racing in the Porsche GT3 Cup Trophy Argentina. Just two years later, he became the youngest driver to be invited to the Porsche Mobil 1 Supercup Europe. He made his IMSA WeatherTech series debut in 2021, making this month’s outing his second run at the Twelve Hours of Sebring.

“I’m really looking forward to the Twelve Hours of Sebring,” Llarena said. “This will be my second time racing in it, so I have much more confidence than the first time, I already know the track and how the race works. I’m very happy to join NTE/SSR. I’m excited for the opportunity to get to know a new team and new drivers. For sure we will give it our all to get a good result.”

This year’s Twelve Hours of Sebring will host one of the most exciting weekends of the year for fans attending the event. With the IMSA WeatherTech Series acting as the event headliner, support series for the weekend include Michelin Pilot Challenge, Porsche Carrera Cup North America, and the FIA World Endurance Championship. Race week will begin on Tuesday, March 15 with an IMSA transporter parade through downtown Sebring at 5:30 pm. Practice sessions for NTE/SSR and the rest of the IMSA WeatherTech SportsCar Championship competitors begins on Thursday, March 17. The race will take place on Saturday, March 19 at 10:10 am Eastern, concluding at 10:10 pm that evening. Points for this race will not only be awarded to full-season standings, but the North American endurance Cup, a four-race endurance championship that exists within the main championship. The race will air in its entirety on Peacock, NBC Universal’s new home for IMSA streaming.